AppleInsider
Posted: March 12, 2021 12:45AM
in General Discussion edited March 2021
A group of former Facebook employees describe the massive impact Apple's App Tracking Transparency feature will have on the social network, explaining why the company has been so vocal in protesting the change. 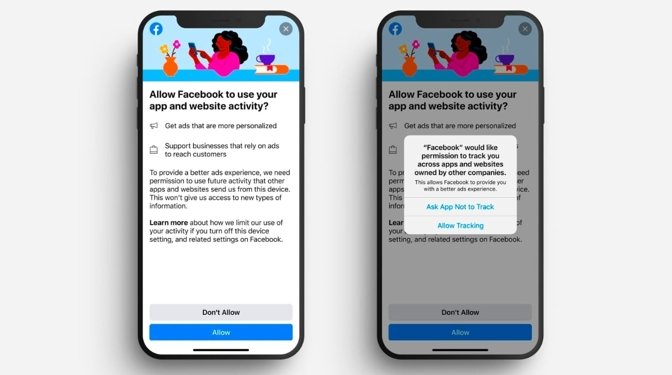 Speaking to CNBC, former Facebook staffers who worked on ad products and businesses detailed the importance of IDFA tracking, which will be explicitly opt-in on iOS starting this spring.

Expected to launch with iOS 14.5, Apple's App Tracking Transparency initiative requires developers to gain permission before tracking a user's device advertising identifier, or Identifier for Advertiser (IDFA) tag. The feature automatically opts users out of tracking by default, though users can allow tracking manually in settings or by interacting with a special dialogue box that appears when opening an app for the first time.

Facebook and others have pushed back against the change, guessing users will likely opt out of ad tracking when presented with the choice. That would deal a major blow to the bottom lines of ad tech companies.

According to former Facebook employees, the anti-tracking feature will block insight into a key metric called view-through conversions. The technology enables ad firms to measure the number of users who purchase goods after viewing, but not interacting with, an ad.

For example, a user might see an ad for a TV while scrolling through their feed, but doesn't tap on the accompanying link. They later purchase that TV or related item from a retailer that shares the consumer's IDFA with Facebook. Pairing IDFAs can therefore help quantify an ad's influence even if a user fails to directly interact with the original post.

Similarly, Facebook's Audience Network, which furnishes targeted ads on non-Facebook platforms, will be negatively impacted by Apple's IDFA screening decision. Also on the chopping block is access to analytics data outside of Facebook's suite of apps.

In protesting Apple's upcoming change, Facebook in December began to run newspaper ads warning of the havoc App Tracking Transparency will wreak on small businesses. It issued similar notices on its own platform. According to at least one former employee, however, those calls for action are slightly disingenuous.

Henry Love, a former employee on Facebook's small business team, told CNBC that many SMBs are unlikely to see a change in ad performance because they don't necessarily need the hyper accurate targeting data provided by IDFA. A coffee shop was cited as an example. Such an establishment typically limits targeting to broad categories like age and physical proximity to a brick-and-mortar store, information that is already available from Facebook's own apps.

"If you talked to any restaurant owner anywhere and asked them what IDFA is, I don't think any of them would know what that is," Love said. "It's affecting Facebook at scale. Not the small business owners."

That said, well-funded start-ups could be vulnerable once the feature goes live.

"The only people targeting across mobile, web and Facebook Audience Network, they're not really small businesses," Love said. "They're sophisticated, VC-backed startups. They're not your typical SMB."

Apple's App Tracking Transparency feature is currently in beta testing as part of iOS 14.5 and should launch in the coming weeks.