AppleInsider
Posted: March 15, 2021 4:17PM
in iPhone edited March 2021
Apple could have an iPhone discoloration problem for some models, with reports from users claiming the iPhone 12 and iPhone 11 aluminum chassis is shedding its color. 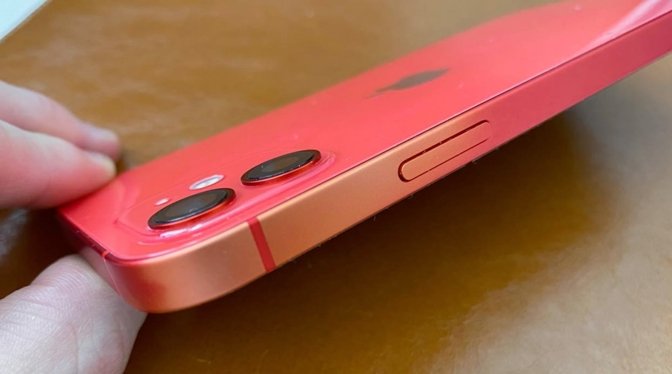 A discolored iPhone 12 in red [via SvetApple]

The iPhone 12 is offered to consumers in a wide array of color options for the chassis and the back of the casing. However, while the rear is protected with a glass back, the exposed sides are apparently causing a problem for some users.

In one instance reported by SvetApple, a red iPhone 12 was found to have visible fading of color in one of the corners. The publication claims it used the iPhone normally and in a similar way to how it used the iPhone XR, which didn't suffer from discoloration.

The report isn't the first complaint about the color of an iPhone fading from the casing of the device. Posts on the Apple support forum mention the same issue affecting the iPhone 11 and iPhone SE 2. The issue isn't limited to the red color, as it has been experienced with black, while a mint green iPhone 11 shipped with several discolored areas.

A common theme is the discoloration affects the aluminum frame, which is the only section that seemingly discolors.

One theory is that Apple's process for applying color to the iPhone could be at fault. While anodized iPhones have a more durable coating, the process is limited to only a few colors, meaning colorful iPhones require other techniques.

It isn't clear how the devices with the reported discoloration are being handled, or if they are in cases. Apple's colorization treatment is a chemical and material process that results in a surface coating, which can fade with abrasions, certain chemical exposure, ultraviolet exposure, or even just time.

Those who raised issues with their iPhones discoloring also reported problems getting Apple to repair or replace their devices. Numerous posts mention attempts to contact Apple's support teams, only to be informed it was a cosmetic issue that wouldn't be rectified.

This is not the first time iPhone users had to deal with discoloration. In 2009, there were reports the iPhone 3GS plastics in white would discolor from excessive heat.

Apple has also dealt with discolored MacBooks in the past, with it offering to replace white MacBook enclosures in 2006 that were similarly discolored.