AppleInsider
Posted: March 22, 2021 7:23PM
in macOS edited March 22
In a retirement that slipped under the radar, Steve Jobs hire Ron Okamoto has retired, with his App Store developer relations role taken up by Susan Prescott. 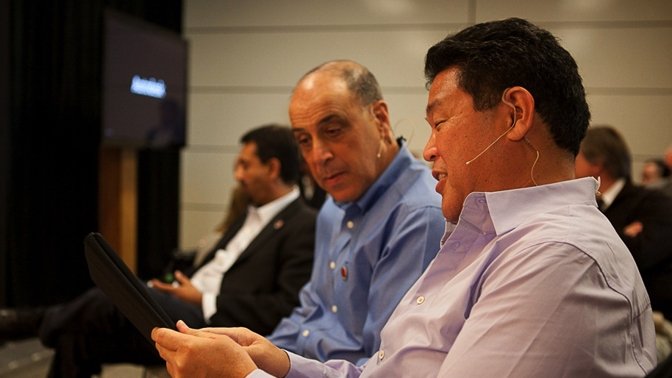 Okamoto at the AutoCad for Mac launch in 2010

"We are thrilled to have Ron leading our developer relations team," Jobs said at the time of Okamoto's hiring. "Ron's firsthand experience at two successful Mac developers will help Apple to become an even better partner for our third party developers."

Okamoto was previously vice president of Product Management and Marketing for graphics products at Adobe Systems, where he was responsible for the worldwide marketing and management of many award-winning products including Photoshop, Illustrator and After Effects. Prior to joining Adobe, Okamoto was director of Product Marketing at Macromedia, Inc.

Okamoto holds a bachelor of science degree in Business Administration from the University of Southern California.

Prescott has a bachelor's degree in system engineering and a master's degree in computer science. She is also formerly of Adobe, departing that company for Apple in 2003.

The discovery of the retirement was made in the latest round of Apple versus Epic court filings. Apple said that Okamoto was retired, but would still be available for deposition.

Phil Schiller remains in charge of the App Store as a whole. The report by Bloomberg on Monday afternoon notes that Prescott is the lead on marketing Apple's apps and services.