Future MacBook Pro enclosure could be a customizable, touch-sensitive surface

AppleInsider
Posted: March 30, 2021 2:49PM
in Future Apple Hardware
A future MacBook Pro keyboard may eliminate the switches of the keyboard in favor of a giant touch-sensitive surface that uses force detection and metal deformation to manage text entry. 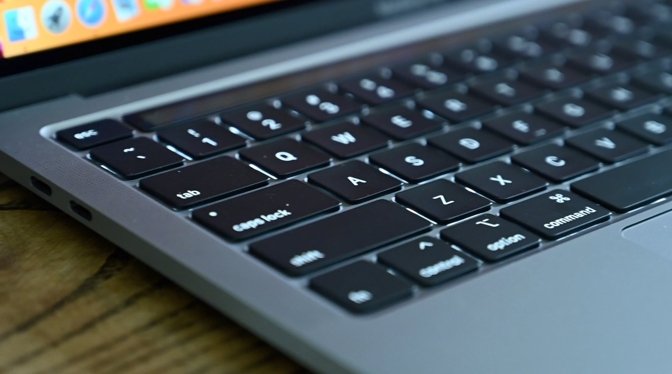 The keyboards of MacBook models have evolved over the years, with Apple changing the design and typing experience for its keys. This has resulted in events such as the butterfly keyboard fiasco and the return of scissor switches in the Magic Keyboard.

However, Apple is still looking into ways to adjust the typing experience in new ways. One such method could introduce force-sensitive typing, along with other benefits.

Granted on Tuesday by the US Patent and Trademark Office, the patent for "Configurable force-sensitive input structure for electronic devices" largely applies to the MacBook Pro and other notebooks, but could feasibly be used elsewhere.

In the patent, Apple suggests the use of a "dimensionally-configurable input region" to define where a keyboard is located, along with other similar regions for trackpads. This region would have a metal contact layer defining keys and other elements in the region.

Below the metal contact layer is a sensing layer, followed by a drive layer that is "capacitively connected" to it. A compliant layer is sandwiched between the sensing and drive layers. These layers would form the pressure sensing elements required for the keyboard to work, effectively creating a giant trackpad that can sense when areas are touched or pressed down.

The use of a compliant layer would enable the metal layer to flex enough to provide users with a sense of feedback. Typically trackpads don't offer any pushback at a level similar to a keyboard key mechanism, and this would theoretically give some level of mimicry.

The sensing layer stack can include the MacBook's enclosure at the top.

Since the force and a location can be determined on the trackpad, this can be used to locate where on a keyboard a user has pressed, as well as whether they have pressed enough to register as a keypress. Normal keyboard mechanisms don't necessarily register a keypress until a certain level of actuation is reached, which the proposed system would emulate.

The metal layer would include a large number of small holes across its surface, holes plugged with a transparent material that can be used to shine light through to the user. These holes, akin to a limited-color display, could be used to define the outline of the keyboard, add key glyphs, or provide an alternative touch interface for specific applications.

Apple's reasoning for using the metal contact layer is that it could actually form part of the enclosure for the lower section of a MacBook. By having a seamless surface without large holes or an exposed mechanism, it eliminates any of the debris issues that plagued the butterfly keyboard mechanism. It could also provide a small amount of water resistance, minimizing the damage of spillages.

The system also eliminates any issues from damaged keys, with the loss of keycaps potentially making it impossible for users to properly type on a MacBook. The system doesn't use keycaps or exposed mechanisms,reducing such issues. 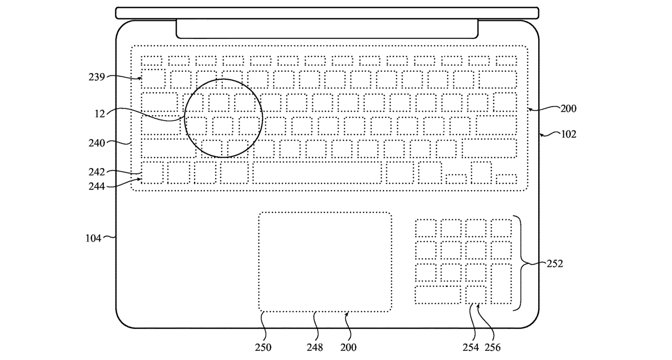 Light holes could be used to show different keyboard configurations on the surface.

The patent lists its inventors as John B. Morrell, Ron A. Hopkinson, Peter M. Arnold, Mikael M. Silvanto, and William F. Leggett, and was originally filed on September 28, 2015.

The filing is very similar to another of the same name that surfaced in October, using the same title, largely covering the same concept, and with the same inventors. Apple does make multiple filings on the same concepts over time to refine them with new ideas and features, and are typically secured as patents long after the previous filings pass through the system.

In this particular situation, the previously-granted October patent was actually filed with the USPTO on July 17, 2017. This is almost two years after the just-granted patent.

The 2017 version of the patent seems to have more of a focus on defining a virtual keyboard using the light holes rather than the mechanics of creating the keys in the first place. While a similar sensing structure is mentioned, the thrust of the patent covers it being used to display the virtual keyboard, and even covers enclosures with non-metallic materials.

Apple files many patent applications on a weekly basis, but while the existence of a patent indicates areas of interest for the company's research and development efforts, they do not guarantee their existence in a future product or service.

The idea of using a touch-based keyboard has been raised previously, such as the use of a hinged OLED screen as a dynamic keyboard. A "keyless keyboard" explored the same idea, using a combination of force sensing and actuators to provide haptic feedback.

Apple has also proposed extra-large and adjustable trackpads, as well as palm rests that could light up and be used as a makeshift trackpad.