AppleInsider
Posted: April 4, 2021 9:06PM
in iPhone edited April 4
The notch of the "iPhone 13" could shrink down considerably, a mockup of what the smartphone may look like proposes, accomplished by moving the top speaker to the edge of the front glass panel. 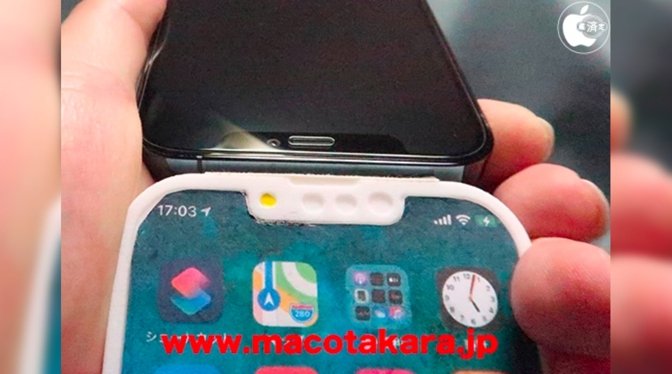 Apple has been rumored to shrink the size of the TrueDepth sensor notch on the iPhone down since the iPhone 12, with the rumors resurfacing for the "iPhone 13." A new mockup of the widely-anticipated 2021 iPhone offers a hint as to what to expect from its arrival.

The mockup acquired by Macotakara is a 3D-printed dummy, which is said to represent the "iPhone 13 Pro" and supplied by "Alibaba Sources." The images show the notch as being slightly different in dimension, but ultimately seemingly smaller than current-generation notches.

The size of the notch itself is said to be 5.35mm in height, up from 5.3mm, while the width shrinks down from 34.83mm to 26.8mm. While slightly taller, the notch will apparently be narrower, due to the shift of the earphone speaker up into the edge of the front glass.

No other major changes to the physical design were noticed in the dummy device.

It is unclear exactly how true to reality the mockup will be, especially given its relatively unknown sourcing. It is plausible that it could be constructed based on other recent rumors about the notch changes, rather than using official design schematics.

In March, the rumor of a smaller notch via a speaker shift appeared, in the form of a trio of glass panels supposedly intended for the "iPhone 13."

Earlier rumors about the "iPhone 13" claim it will have an f/1.5 wide-angle camera in the "Pro Max" model, will ship in new colors with a new fingerprint-minimizing coating, and a redesign of the rear camera system.