AppleInsider
Posted: April 5, 2021 6:36PM
in iPad edited April 2021
Microsoft is continuing in its attempts to claim its Surface Pro 7 is better than Apple's products with another comparison video, putting its tablet against the iPad Pro. 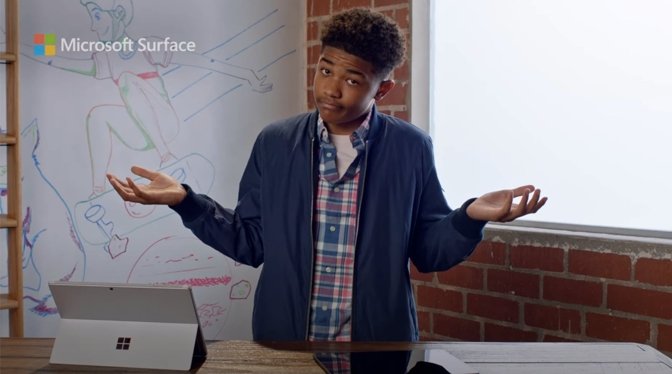 Microsoft launched a marketing campaign in January that compared the Surface Pro 7 against Apple's products, with a video pitting the MacBook Pro against Microsoft's tablet. In April's second attempt, Microsoft is doing the same thing, but this time against the iPad Pro.

Following the same formula as the first video, the second "Still the Better Choice" piece on YouTube takes the form of a tech comparison video. It also follows the same pattern of pointing out perceived benefits of having a Surface Pro 7, in areas that it attempts to show the iPad Pro as weak.

The first segment, "Design," starts off by highlighting the built-in kickstand of the Surface, which the iPad doesn't have. To emphasize the point, despite the comparison being the Surface and keyboard versus the iPad Pro and Magic Keyboard, the actor lets the iPad slam down onto the wooden table surface to demonstrate the lack of stand.

The detachable keyboard argument from the first video reappears, with the Surface Type Cover able to be attached with a click. Holding up the Magic Keyboard, which the actor names as "the iPad keyboard," the comment is that it is "a lot heavier."

On to "Connectivity," the Surface is shown to have multiple ports, while the iPad Pro "has one," discounting the existence of the Smart Connector completely.

To underline the apparent connectivity issue, the actor holds up the iPad with an attached USB-C Digital AV Multiport Adapter and an additional headphone adapter, before asking "You want to be this guy?"

Under the last main section, "Power," the actor states the iPad Pro is "just a tablet," then says the Surface "is a full computer and a tablet."

Lastly, Microsoft compares the price, which it puts the Surface Pro 7 at $880, while the iPad Pro is labeled as $1,348. The small print states "price includes device and keyboard shown."

It seems that the Surface Pro model Microsoft is using to compare is the cheapest-available model, equipped with an Intel Core i3 processor, 4GB of memory, and 128GB of storage for $749.99. the remainder of the quoted price is taken up by the cheapest regular-priced Surface Pro Type Cover at $129.99.

The ad in general seems to try and poke fun at iPad Pro ownership with relatively cheap arguments. For example, the dongle argument ignores that users could be using Bluetooth to connect headphones for audio, rather than going down that awkward configuration of accessories.

You also gain an extra USB-C port for charging the iPad Pro when it is attached to the Magic Keyboard, which the Microsoft video completely omits.

The "just a tablet" comment is also disingenuous, since an iPad can be used for the same sort of tasks as a Surface Pro. Microsoft doesn't quite qualify what it means by declaring that the Surface is "a tablet and a computer," as that would infer the iPad Pro isn't a computer at all.

On face value, the heavy keyboard comment is factual, as the Magic Keyboard for the 12.9-inch iPad Pro is 1.6 pounds, versus the type cover's 0.68lb mass. However, while this does make the iPad Pro and Magic Keyboard combo heavier than the Surface Pro and its keyboard cover, the 12.9-inch iPad Pro alone weighs 1.4 pounds, lighter than the Surface Pro 7's 1.7 pound weight.

It remains to be seen how long the ad will be available to view by Microsoft via its Surface account. The first ad is still viewable, but it is in an unlisted state, meaning it can be viewed with a direct link or when embedded in a webpage.
«12»