AppleInsider
Posted: April 7, 2021 8:43PM
in General Discussion
Electric bike manufacturer VanMoof announced that its new S3 and E3 models will be compatible with Apple's Find My app for location tracking. 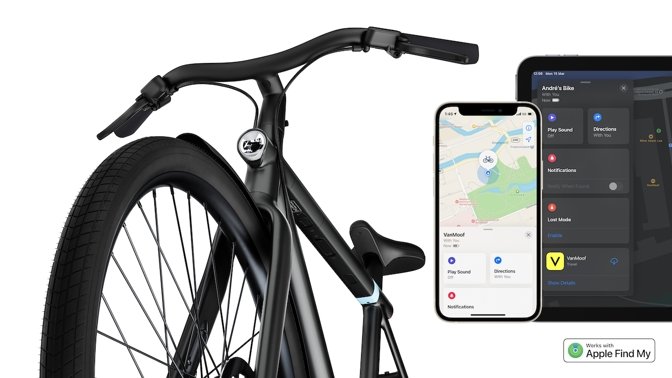 VanMoof's new e-bikes are among the first third-party devices compatible with Apple's Find My network, which the company opened up to non-Apple devices on Wednesday.

Starting Wednesday, VanMoof said that all new S3 and E3 bikes ordered will be compatible with Apple's Find My network. That will allow users to track their bikes in the Find My "Items" tab on iPhone, iPad, and Mac.

The Find My support also includes offline tracking, which leverages Apple's network of millions of devices to relay the location of a lost or missing item to its users. The feature protects a user's privacy and security through built-in encryption.

In addition to the ability to play a sound on a VanMoof bike, users can also place a missing bicycle in Lost Mode. If another person finds it, they'll be able to identify the owner and contact them directly to return it.

Along with VanMoon, Chipolo and Belkin are also among the first third-party manufacturers to offer Find My integration. Chipolo on Wednesday unveiled a new item tracker that works with Find My, and Belkin's Soundform True Wireless Earbuds will also feature support for Apple location tracking.