iPhone recovered from Taiwan lake after biggest drought in 50 years

AppleInsider
Posted: April 11, 2021 12:50PM
in iPhone edited April 11
An iPhone accidentally dropped into a lake in Taiwan has been recovered one year later, after the biggest drought for over 50 years receded the water line enough to spot it. 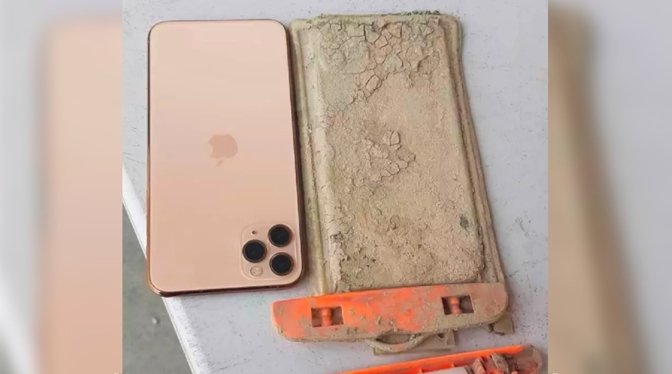 In March 2020, a man identified on the Bao Fei 1 Commune Facebook Group as "Chen" lost his iPhone 11 Pro Max while paddling in Sun Moon Lake, in Taiwan. The man wore the iPhone in a plastic waterproof pouch around his neck but lost it after falling into the water multiple times.

At the time, Taiwan News reports a friend was optimistic, telling the man he would see the iPhone again "in a year."

In early April, Chen was informed that his iPhone had been found. The lake had dried up enough that the iPhone and pouch were easily visible on the dried lakebed.

Enduring what is believed to have been the worst drought in Taiwan for over 50 years, it was a rare occasion for the lake to dry up enough to see the iPhone in its found location. Local residents advised the man that the water hadn't fully receded in between 50 and 60 years.

Shortly after Chen reacquired the iPhone, the water returned to the lake.

While the waterproof pouch was heavily soiled, the iPhone itself was seemingly perfectly intact. After recharging it, Chen said all of the iPhone's functions were normal.

"I can only say that the waterproof case for the iPhone is really great. There's no water in it," Chen said to the publication. "I'm so happy to have recovered my iPhone after having lost it for so long."

Numerous stories have surfaced over the years about people recovering iPhones lost in bodies of water, and for long periods of time.

In late March, a woman retrieved her iPhone from a frozen lake in Saskatchewan after losing it for 30 days, fully functional after being rescued with a magnet. In early March, a diver found an iPhone 11 at the bottom of a British Columbia lake after almost six months of submersion.