AppleInsider
Posted: April 12, 2021 1:37PM
in macOS
In a short video posted to Twitter, an iOS engineer has shown that it's possible to play "Flappy Bird" directly within a macOS push notification. 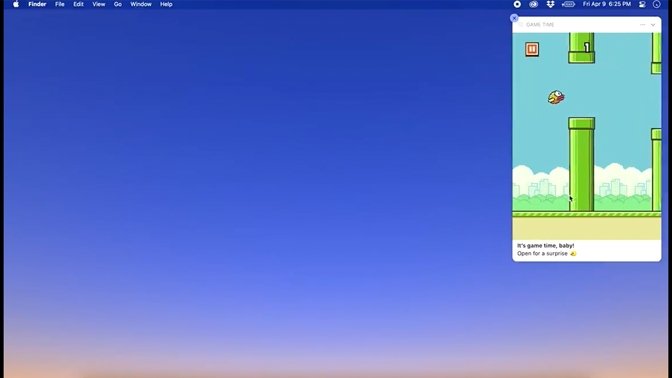 Neil Sardesai posted a short video to Twitter showing a macOS notification that contained a playable version of the infamous "Flappy Bird."

Did you know you can put a whole game inside of a push notification pic.twitter.com/LlMx2AjvHH

"The UserNotificationsUI framework was added to macOS in Big Sur," he said in a follow-up Tweet. "But for some reason there's no Xcode template for Notification Content Extensions on macOS. So you have to make one for iOS and then change all your UI's to NS's."

Sardesai's Twitter account plays host to a number of other interesting macOS tricks, too. This includes a video that shows him manipulating hexagonal windows within macOS and one where he plays The Google Chrome Dinosaur Game in the macOS menu bar.

The "Flappy Bird" notification game isn't available to the public as of right now. It still serves to show that there are plenty of creative things that developers can do with macOS.