AppleInsider
Posted: April 16, 2021 3:58PM
in Apple Watch edited April 16
GymKit syncs Apple Watch and exercise equipment metrics during a workout, a system Peloton did not use correctly for Bike+ Bootcamp. 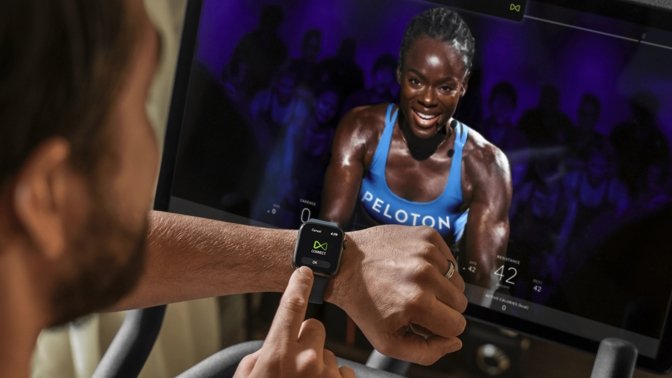 One of the key features of the Peloton Bike+ is the inclusion of GymKit. This is a system that allows Apple Watch owners to track their workouts on select gym equipment with a tap.

On Thursday, reports of users complaining about a change to GymKit surfaced. Users could no longer pair their Apple Watch when taking the Bike+ Bootcamp course.

At first, speculation pointed to competitive reasons since Peloton would soon introduce a wearable fitness tracker. Peloton didn't offer much reason for the feature removal other than it had to comply with Apple's policy.

On Friday, AppleInsider and other venues received a statement from Peloton clarifying the matter:

Apple GymKit is designed to work with equipment-based cardio workouts. However, Peloton recently implemented GymKit with Bike Bootcamp, a multi-disciplinary class type that combines strength and cardio, which the feature does not support. Members can still use GymKit to sync their cycling-only workouts to their Apple Watch from the Bike+.

Apple says the Apple Watch isn't designed to track workouts that change focus mid-workout. During normal operation, if a user wants to shift from cardio to strength training, they have to manually change workouts within the Fitness app.

Apple Watch users can still use GymKit with their Bike+ when performing standard cycling classes. Peloton has stated that it wants to include Apple Watch in more workouts in the future.

Apple has a video workout program similar to Peloton's called Apple Fitness+. It integrates the Apple Watch using on-screen metrics. Notably, the workouts are all single-purpose as well and do not shift types mid-video.