AppleInsider
Posted: April 19, 2021 3:28PM
in General Discussion edited April 2021
Apple has stopped accepting new podcast episodes to iTunes Connect, a temporary measure that could be an indication a big change to how Podcasts function may be on the way 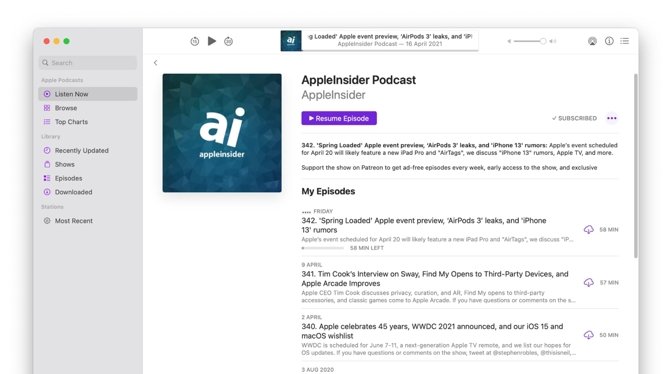 Rumors suggest Apple is planning to announce a premium podcast subscription as part of its "Spring Loaded" special event. While there hasn't been any concrete evidence so far, some downtime the day before Tuesday's events may be a sign of some behind-the-scenes work at play.

AppleInsider has discovered a new error message in the My Podcasts section of iTunes Connect. Editing the HomeKit Insider podcast, uncovered an alert stating: "The ability to submit new shows for review is temporarily unavailable." There was no indication of when Apple would start accepting new shows for review again.

While this may be some form of indication that a major podcast-related change could be on the way, such as a premium subscription option, it may also be an affect of scheduled maintenance. The Apple Developer System Status does list scheduled maintenance for today -- however, it also states that this maintenance has been completed, and the error persists anyway. It's the same with other Apple services, including App Store Connect and Accounts, which may also interfere with its podcast-related tools. All say maintenance has been finished, but the issue remains.

If Apple is to launch a new paid podcast offering on Tuesday, it is unclear exactly what form it will take, but it will likely follow the same sort of pattern as other subscriptions, such as Apple News+ and Apple TV+. Such a subscription may also become part of the Apple One bundle.