AppleInsider
Posted: April 20, 2021 3:45PM
in Future Apple Hardware
Future Apple devices and accessories may use buttons made from fabric, a concept that could help with the design of unique hardware and peripherals, as well as eliminating the need for current styles of buttons and switches. 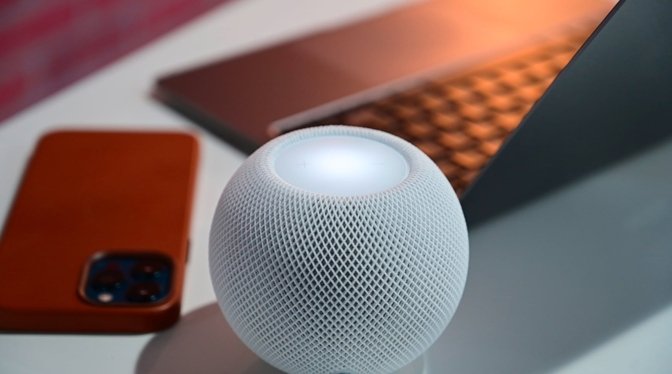 The HomePod mini is covered with fabric, though not fabric buttons.

Practically every electronic device on the market includes at least some form of button or switch. Be it to turn a device on or off, or to interact with an item, buttons have been around for a long period of time, and are unlikely to disappear anytime soon.

However, the current way that buttons operate are somewhat limiting for hardware designers, as they could be quite bulky relative to more important components and elements. This is in part due to a button effectively changing the state of a switch between open and closed, which is monitored by control circuitry.

In the case of the HomePod mini its top surface contains capacitive buttons within a solid panel, something that could easily be removed if there were other interaction methods available that suited the rest of the speaker's design.

In a patent granted by the U.S. Patent and Trademark Office on Tuesday titled "Electronic devices with fabric buttons," Apple suggests those buttons could be built to be slimmer, by removing the formal switch-style element in favor of other fabric-based ideas.

Rather than the fabric buttons being used to affect a switch, the patent offers that the support structures of the buttons could be made from fabric, which can contain elements to determine button presses.

For example, a button could be made from a plastic square, with fabric around the edge connecting it to the rest of the device's external surfaces. When a user presses the plastic square button, it can move down in a form of actuation, due to the flexible nature of fabric. 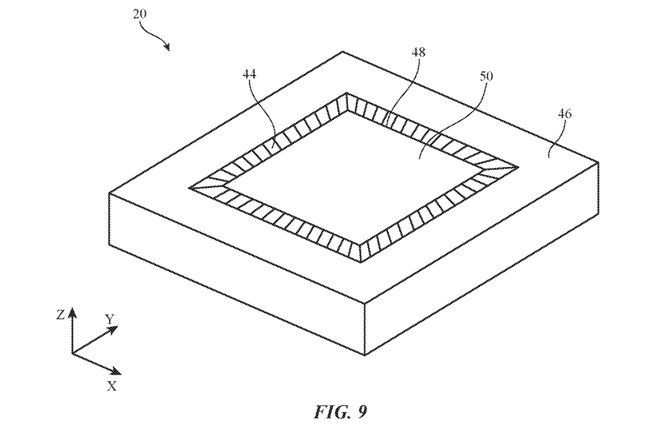 Buttons could be surrounded with fabric on all sides.

The fabric could have a biasing structure and be produced from a knitted fabric, allowing it to support the button in a desired position, and to return to that location after the press has concluded.

The knitted fabric could also include conductive structures, such as metal threads, which can form capacitive sensor electrodes. By detecting capacitance changes between the electrodes, the device could detect a button press once certain capacitance levels are reached.

The strands may also allow for resistance changes as the button is pressed, such as to indicate when a button has been pushed down enough to count as a press to the device. It's also plausible that this resistance could be monitored to detect button presses.

The biasing structures could also include elements that could make the button move in specific ways when pressed. This could be to allow the button to smoothly move how a user expects it to move, as well as to aid its return back to position post-press.

Apple also suggests the inclusion of a haptic actuator attached to the movable button structure, as well as an air bladder to give resistance to a press, and the creation of a "springy rectangular ring" for further support.

The use of multiple layers, optical fibers to illuminate the button, and the creation of a "bistable spring" created with intertwined strands.

Fabric support structures could be used to help return the button to its original position.

The patent lists its inventors as Paul X. Wang, Ian A. Guy, and Karan Bir. It was originally filed on August 13, 2019.

Apple files numerous patent applications on a weekly basis, but while the existence of a patent indicates areas of interest for Apple's research and development teams, it does not guarantee the ideas will make it into a future product or service.

The idea of using fabrics for control structures have surfaced in previous patent filings.

In March 2020, Apple applied for a patent for a "fabric-covered electronic device with touch sensor," suggesting a HomePod or a similar device could use conductive strands to offer buttons to press in the fabric itself. For March 2021, Apple took the idea further with another application suggesting how to add displays embedded into a fabric cover.

There has also been other patents from February 2020 dealing with tension in fabric via magnetic knots, as well as creating fabric dome switches.
Sign In or Register to comment.