Apple Maps to add user reviews and photos in US [u]

AppleInsider
Posted: April 22, 2021 11:19AM
in iOS edited April 22
Following the feature's appearance in selected countries like the UK, Apple Maps appears poised to add user reviews and photos in the U.S. and beyond. 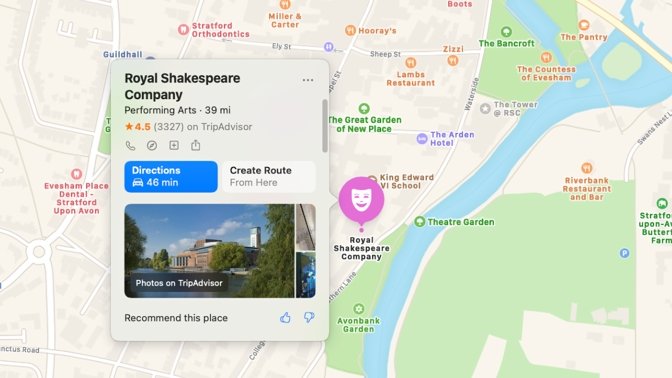 Once enabled, visiting a site such as a theater will include a thumbs up or down icon

Apple Maps has been adding the ability to include a thumbs up or down review, plus photos, to locations and businesses since an August 2020 beta of iOS 14. The "Ratings and Photos" feature has subsequently been included in the public releases of Apple Maps, but only in selected countries.

Now, as spotted by MacRumors, a U.S. location was shown having this recommendation option during a brief moment in the "Spring Loaded" event.

In a Map showing the Joshua Tree National Park, the words "Recommend this place" can be seen, alongside a pair of thumb up/down icons. It's likely, though not certain, that this will be introduced publicly alongside macOS 11.3, and iOS 14.5.

As used in other countries, Apple Maps does not automatically display the option to rate locations like this. Instead, users have to click on a location's icon, scroll to the bottom of the description that appears, and then click to rate.

Apple Maps then explains that the purpose is to help others, and that Siri will now suggest you rate places that you go to. There is also then a privacy notice about how "ratings and photos you share are linked to your Apple ID to ensure a safe experience." 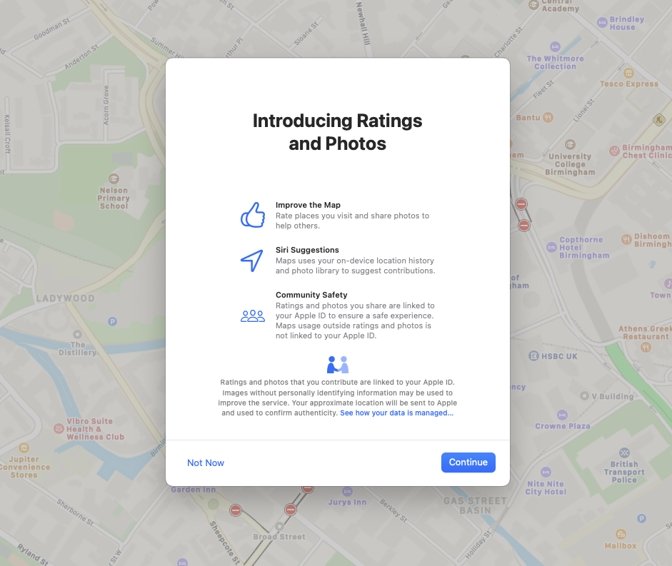 The first time a user wants to add a photo or recommendation, Apple Maps explains how the data will be used

This is presumably in order to provide some accountability, to prevent businesses over-rating themselves. Otherwise, Apple notes, "maps usage outside ratings and photos is not linked to your Apple ID."

Users have to choose a Continue button in order to enable the feature. After they've then add their first photos, or pressed on the thumbs up or down icons, that detail is posted. And now visiting other reviewable locations, such as theaters and restaurants, the prompt to rate is prominently displayed.

Update: Japanese blog Mac Otakara reports the feature expansion is live at select locations in that country, including Apple Stores. The publication notes the image upload service automatically obscures faces, though the same processing is not yet provided for car license plates.

Interestingly, ratings and photos are not made public and remain visible only to original posters. That will likely change once the feature officially rolls out.