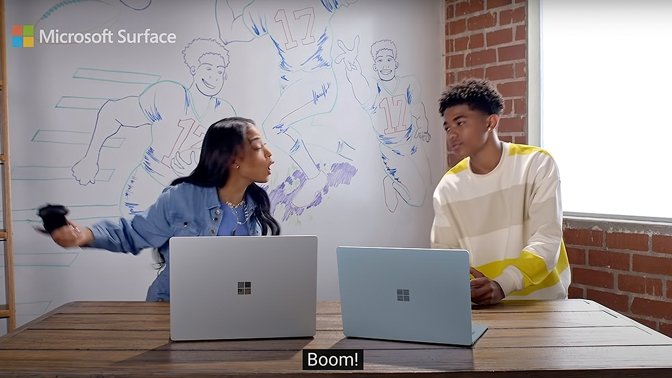 The Microsoft ad follows up on one the company released in January, comparing the Surface Pro 7 to the MacBook Pro. The new ad includes two young actors who say they're siblings, presenting the 30-second "review" in a style reminiscent of YouTube influencers.

Like the first ad, the new spot touches on well-trodden talking points about why the Microsoft ecosystem is supposedly superior to Apple's.

These include a reference to touchscreens. After mentioning the Surface's touch capabilities, the sister asks, "Is the MacBook Air touchscreen?"

"Mmmmm," the brother responds negatively, with a disappointed look on his face. "How can you not have a touchscreen?"

Apple has so far kept the Mac distinct from its touchscreen mobile devices like the iPad Pro. While the iPhone maker has filed patents that include mentions of touchscreen laptops, Apple executives have repeatedly dismissed the possibility, insisting that pro users care more about performance and storage.

The Microsoft ad also takes a dig at Apple's supposed port disadvantages and the dongles that can stem from that.

"Surface Laptop has a USB-C and a USB-A. MacBook Air doesn't have that."

"Better bring your dongle," replies the other actor in an exaggerated monotone, wiggling an adapter like it's a wet noodle.

The Surface Laptop has one USB-C and one USB-A port. The MacBook Air has two Thunderbolt 4/USB 4 ports, which are backward compatible with USB-C. While Apple's setup requires adapters for USB-A accessories, its ports offer significantly faster maximum transfer rates. 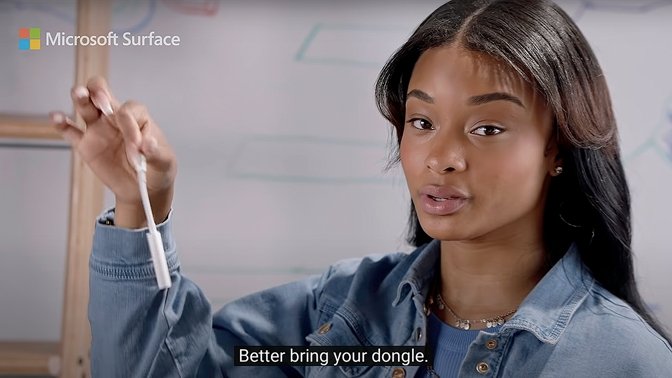 The ad's final beat doesn't mention Apple explicitly, although it highlights one of the Mac's undisputed weak points -- gaming. However, it does so in a potentially misleading way.

"Surface Laptop runs Windows," the actor says. "So I can run all my favorite apps."

"And games," chimes in the other.

It then cuts to the two siblings playing games on the Surface Laptop using Xbox controllers.

The Surface Laptop 4 uses integrated Intel graphics, which won't support AAA games that require a dedicated graphics card. Since the laptop doesn't have Thunderbolt 4, it's doubtful that its USB ports could support fast enough speeds for an external GPU.

The types of casual games one could play on the Surface Laptop 4 aren't on par with the big-name titles one would buy a dedicated gaming PC to play. If Microsoft's ad copywriters were hoping to make a connection between Windows' gaming prowess and the Surface Laptop, it's a misleading one.

Apple's latest MacBook Air launched in November. It adds the M1 chip, the first Apple Silicon for Macs. The processor will also power the 2021 11-inch iPad Pro and 12.9-inch iPad Pro when they launch in May.