Want to protect your new AirTag? Here are the accessories you need

AppleInsider
Posted: April 26, 2021 8:35PM
in General Discussion edited April 2021
If you're buying an AirTag at launch, you'll probably want to acquire a holder for the small tracker. Here's a compilation of accessories for AirTag that you can buy to carry around and attach it to the things you don't want to lose. 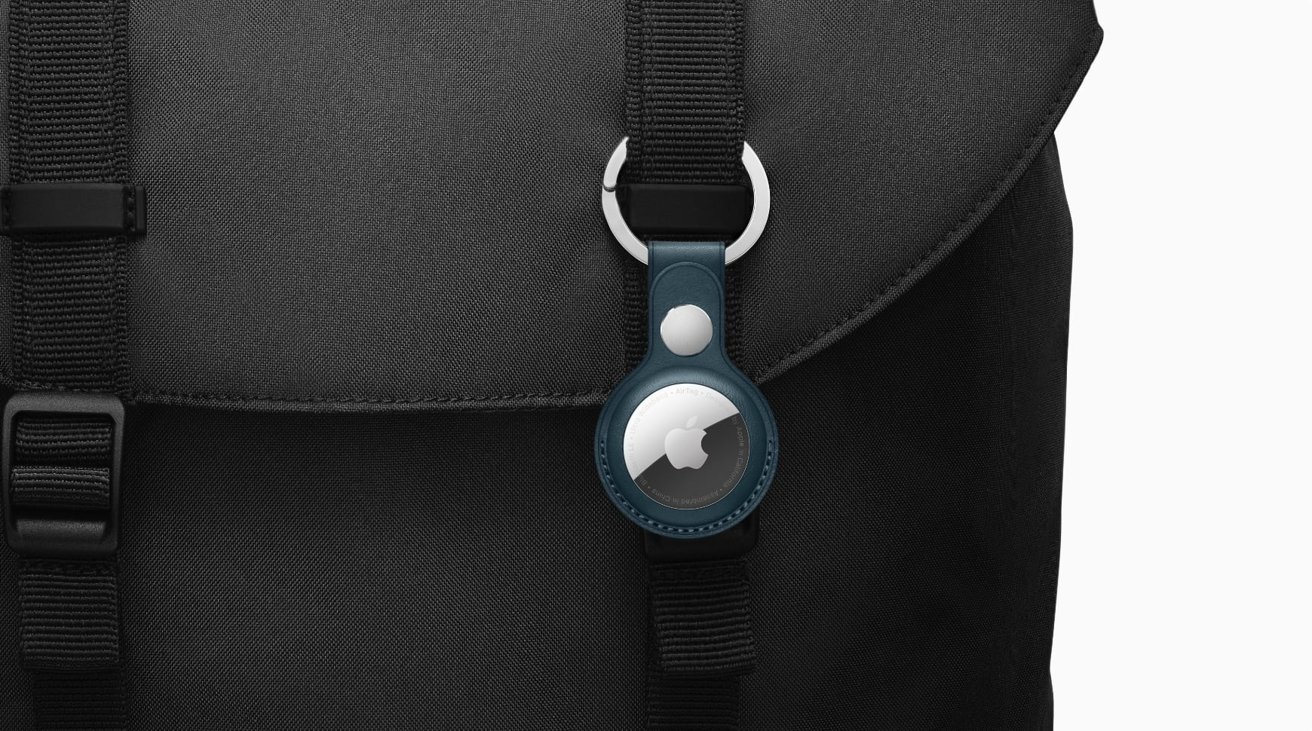 AirTag's design is striking yet simple, consisting of a round tag with a rim. While the coin-like device is beautifully crafted by Apple, it differs from other trackers on the market as it doesn't include any built-in attachment points. Other tags from firms like Tile and Chipolo include holes and spaces to hook or tie the tags onto an item or keychain, however AirTag doesn't offer this capability out of the box.

Naturally for an Apple device, there's a large number of accessories already produced for the AirTag, which can help you attach it to practically anything you want, within reason.

We've compiled a list of accessories for AirTag that you can buy now, to holster that tracker and place it on your prized possessions. 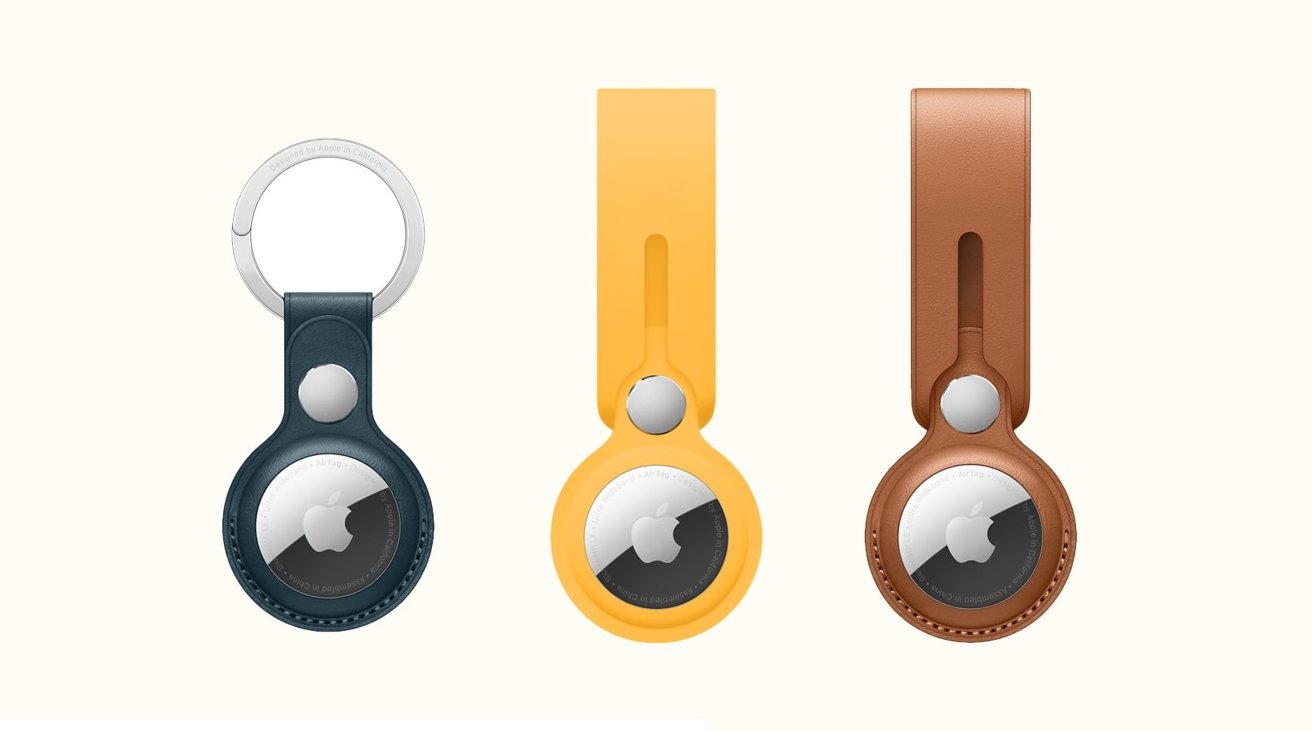 To go with the launch of its own product, Apple has come up with three different styles of AirTag accessories. All largely consist of a small pocket to hold the AirTag, and a looped section for attaching it elsewhere.

The simplest of the three options is the AirTag Leather Key Ring, offered in Baltic Blue, (Product) Red and Saddle Brown. Pairing a European leather holder to hold the AirTag with a stainless steel ring, the key ring sells for $35.

The second version is the cheaper AirTag Loop, a polyurethane strap that has the round AirTag section passing through a slit on the tag's tail to secure it in place. Available in White, Sunflower, Deep Navy, and Electric Blue, the AirTag Loop is sold for $29.

The last option is the AirTag Leather Loop, which uses the same design as the AirTag Loop, but uses European leather. Offered in Saddle Brown and (Product) Red, it is priced at $39. 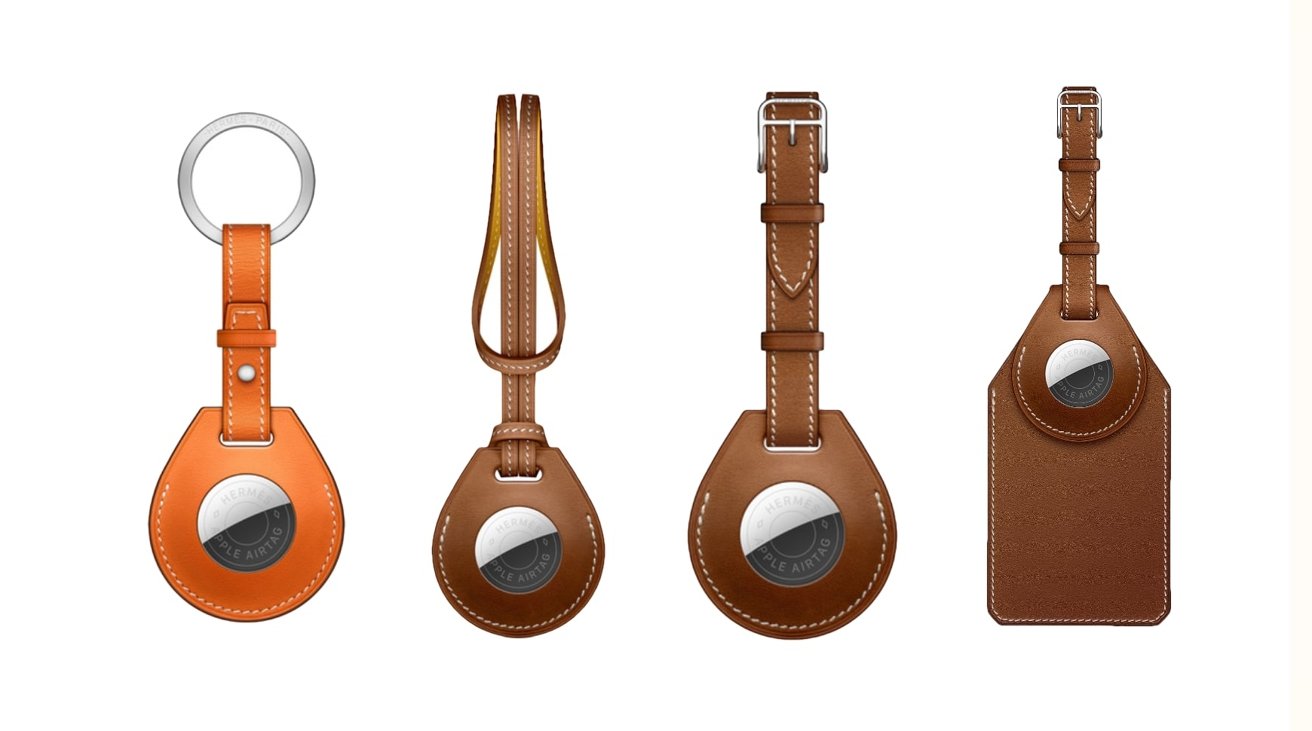 An Apple accessory partner and leather goods producer, Hermes offers a few AirTag accessories of its own, naturally with premium prices. Unlike other accessories, all Hermes versions include a custom-engraved AirTag etched with the iconic Clou De Selle signature.

The AirTag Hermes Key Ring is produced from heritage Barenia leather or smooth Swift leather with contrasting saddle stitching. Offered in Orange, Fauve, and Bleu Indigo, it is sold from Apple directly for $349.

Using the same three colors and stitching style, the AirTag Hermes Bag Charm is designed to be looped onto a bag handle using the long leather strap. The online Apple Store lists the accessory at $229.

The AirTag Hermes Luggage Tag, made from Barenia leather with contrasting saddle stitching, is again designed to hook onto a bag. This time, the leather strap has a buckle, allowing for a simpler attachment to the bag or suitcase. Apple sells the tag for $449.

Hermes also sells another AirTag accessory directly from its website. The AirTag Hermes Travel Tag is made in the same way as the Luggage Tag, except it includes an extra luggage tag section for the traditional hand-written contact details of the case's owner. It is priced at $699. 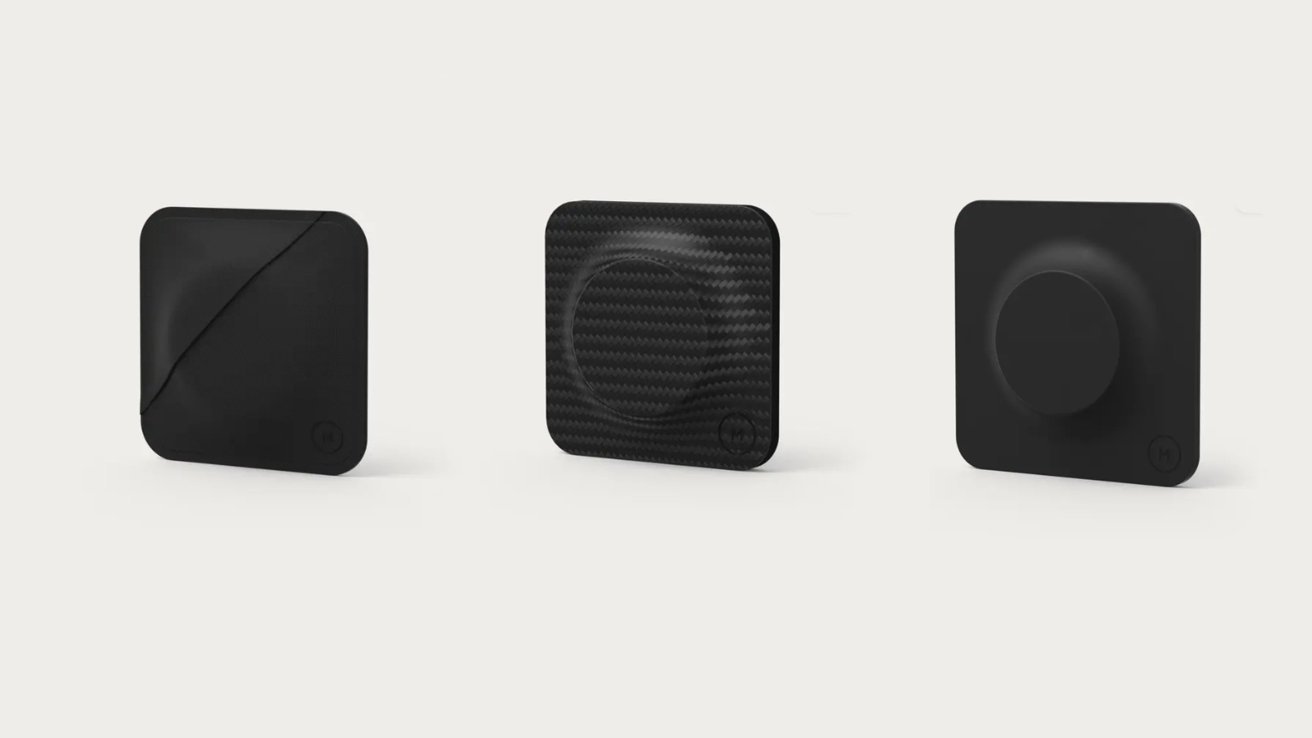 A trio of Mount products from Moment take the route of permanently affixing the AirTag in place on a thing you want to track. The idea is that you can attach the AirTag in a hidden location, making it hard for thieves to spot and remove the AirTag from the goods.

The Stretch Fabric Mount has a double-hemmed closure for a secure fit, a durable powermesh construction, and uses a proprietary adhesive backing that sticks to fabric bags, backpacks, jackets, and hard surfaces. It is priced at $14.99 from Moment directly.

The Hard Shell Mount follows the same idea, this time protected by an aramid fiber shell with a foam lining to cushion the AirTag. The adhesive will stick the mount to any flat hard surface, with the mount becoming watertight once affixed, and is supplied with a second adhesive pad to move the mount at a later time. It is priced at $19.99.

The Curved Surface Mount goes down a similar route in that it can be used to attach the AirTag to a hard surface, but its flexible silicone construction means it can be attached to curved or uneven surfaces. Again, it is watertight once stuck in place, and has an extra adhesive pad for removal and installation onto new surfaces. It is priced at $14.99.

All three of Moment's AirTag accessories are expected to ship by July 20th, but are available to preorder now. 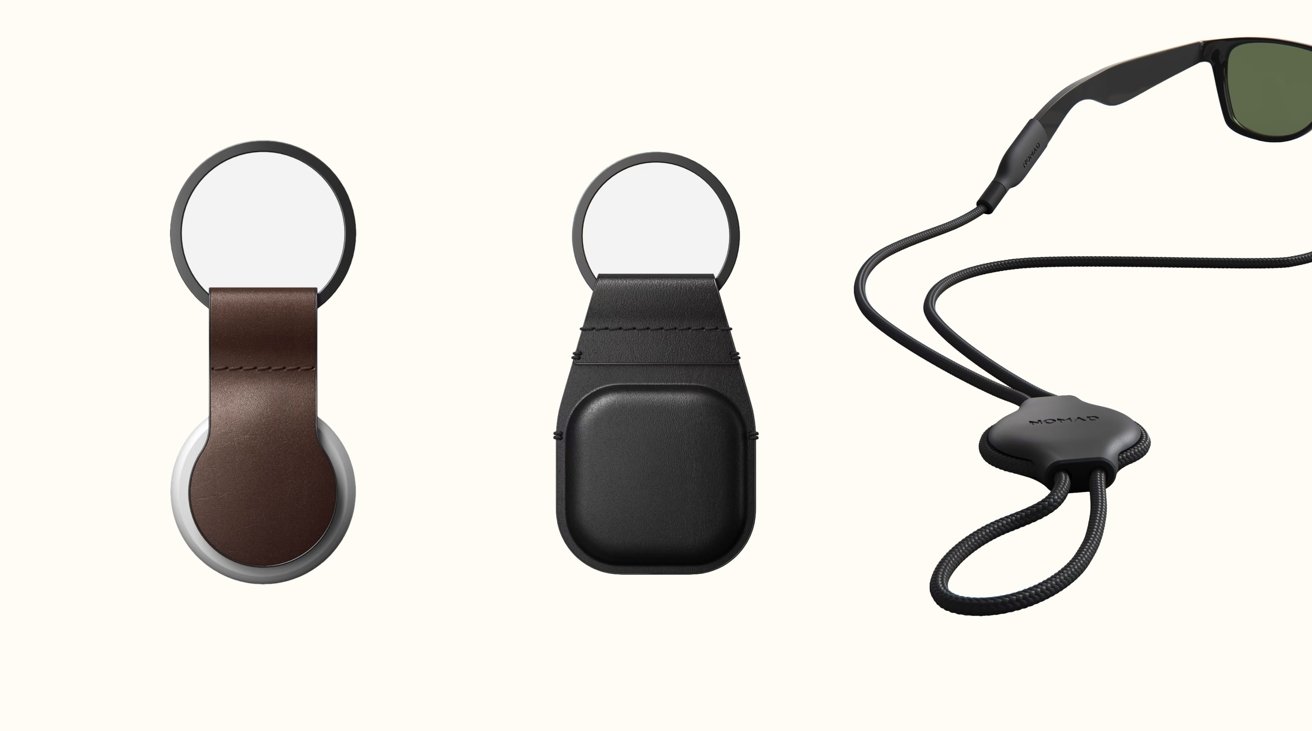 Nomad has produced three accessories for AirTag, with key ring-style tags joined by a tracking holder for glasses.

The Leather Keychain is produced from Horween leather to generate a unique patina over time and thermoformed into an enclosure to safely protect the AirTag from the elements. Supplied with a matching Black stainless steel keyring, and offered in Rustic Brown and Black variants, it is available for $39.95, or $29.95 during its preorder period before July 20.

The Leather Loop takes a more minimalist approach, consisting of a Horween Leather loop that attaches to the AirTag at the front and rear with 3M adhesive, keeping the edge of the AirTag exposed. Attached to a black keyring and available in Rustic Brown, Black, and Natural color options, it is priced at $24.95 normally, or $19.95 under preorder before June 21.

The Glasses Strap is an attachment for your reading or sunglasses, consisting of a cord with elements that attach to the end of the glasses' arms. The AirTag fits into a lightweight TPU capsule midway along the cord, which also acts as a tensioner to hold the glasses tight on the head while exercising. Shipping by July 20, it is priced at $39.95 normally, $29.95 as a preorder. 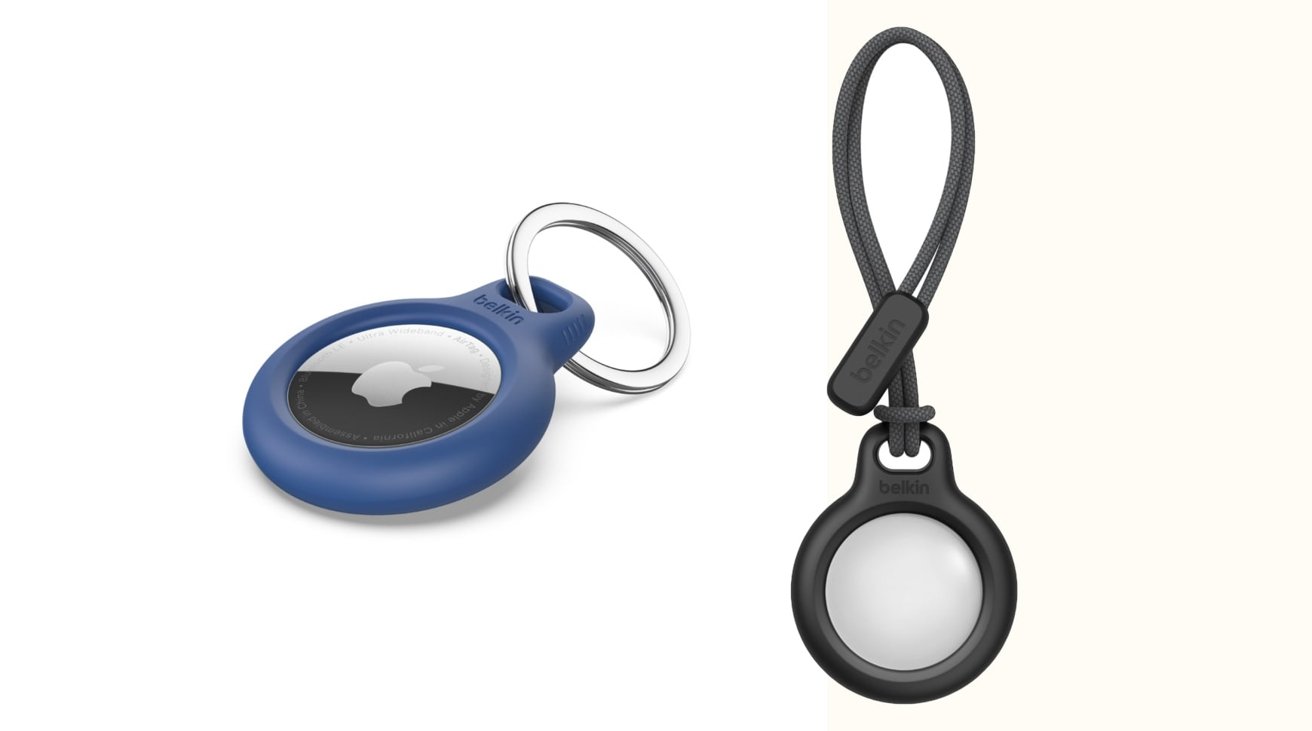 So far, Belkin has produced two accessories for carrying around the AirTag, with both available as a preorder and shipping in May.

The Secure Holder with Strap uses a twist-and-lock design to surround the AirTag at the edge, using an open design to make engravings visible, but with raised edges to prevent the AirTag from being scratched when laid on a surface. A cord loop is also included for attaching it to other items.

Offered in Black, Blue, Pink, and White, Belkin is pricing the Secure Holder with Strap for AirTag at $12.95 on its own website.

The Secure Holder with Key Ring follows the same body design as the Strap version ,but switches out the cord for a keyring. Also available in Black, Blue, Pink, and White, it is priced at $12.95.