AppleInsider
Posted: April 27, 2021 1:42PM
in General Discussion edited May 3
Podcast creators who use Anchor can now submit paid-only podcast episodes to Spotify, initially for no additional cost but with a 5% fee starting in 2023. 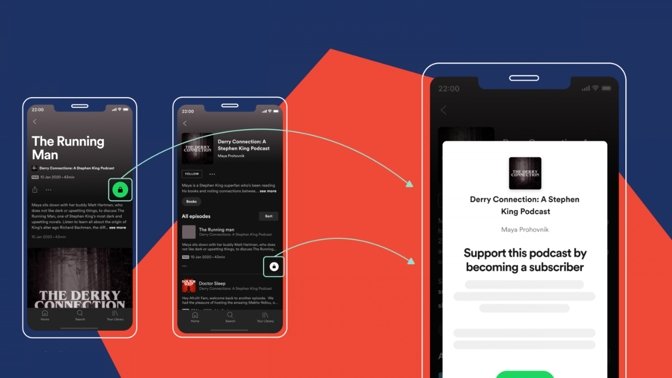 As previously predicted, Spotify has launched paid podcasts on its platform and is rolling out the service to creators and users. It hopes to achieve a competitive advantage over Apple's new podcast offering with zero fees and non-exclusive requirements.

On Tuesday, Spotify announced its new feature to allow users to subscribe to pay-only podcast feeds. It will be using Anchor to process paid subscriptions and manage the content.

Paid-only content will be searchable via the Spotify app, but users will have to leave the app and purchase the premium feed on Anchor. This allows users to subscribe to podcasts without paying Spotify directly, thus circumventing Apple's 30% cut.

Podcasts themselves are set to be able embed payment links within show notes or on the podcast pages, but it is unknown if this will violate Apple's payment services agreement. Usually, app developers are forbidden from displaying external payment options within an app, but asking creators to post the links may be a loophole.

Spotify will not be taking a cut of podcast revenue for the first two years of its service. Starting in 2023, Spotify/Anchor will take 5% of all premium payments but maintains that this is highly competitive compared to others like Apple. Content creators will still be responsible for payment processing fees, too.

Podcasters that already have premium podcasts outside of Anchor will soon be able to integrate their feeds with Spotify as well. The company promises future compatibility in the coming months.

Spotify also announced the Spotify Audience Network (SPAN) for advertising. Free podcasts that want ads can use SPAN to insert ads into the content. Starting May 1, Spotify plans to open up SPAN to advertisers for more variety.

These moves from Spotify do follow the company's previous plans to expand more into non-music audio, but they also come after Apple's announcement of subscription podcasts. Rather than use a separate service like Anchor, Apple will enable creators to host content directly on Apple's podcast platform.

Payments will be integrated into Apple's podcast app, another significant difference between its and Spotify's services. Creators that offer premium podcast feeds on Apple Podcasts will be charged 30% for the first year and 15% after for each subscriber.

Spotify promises that premium podcasts hosted on its platform will remain open for publishing on other apps and services. Apple, however, wants to lock premium podcasts to its app. The two companies have taken very different approaches to podcast services, but only time will tell which will stick with the audience.