AppleInsider
Posted: May 19, 2021 5:36PM
in General Discussion edited May 19
Apple has announced a major new accessibility initiative, including software updates that add new features for people with disabilities and a new service that connects customers with sign language interpreters. 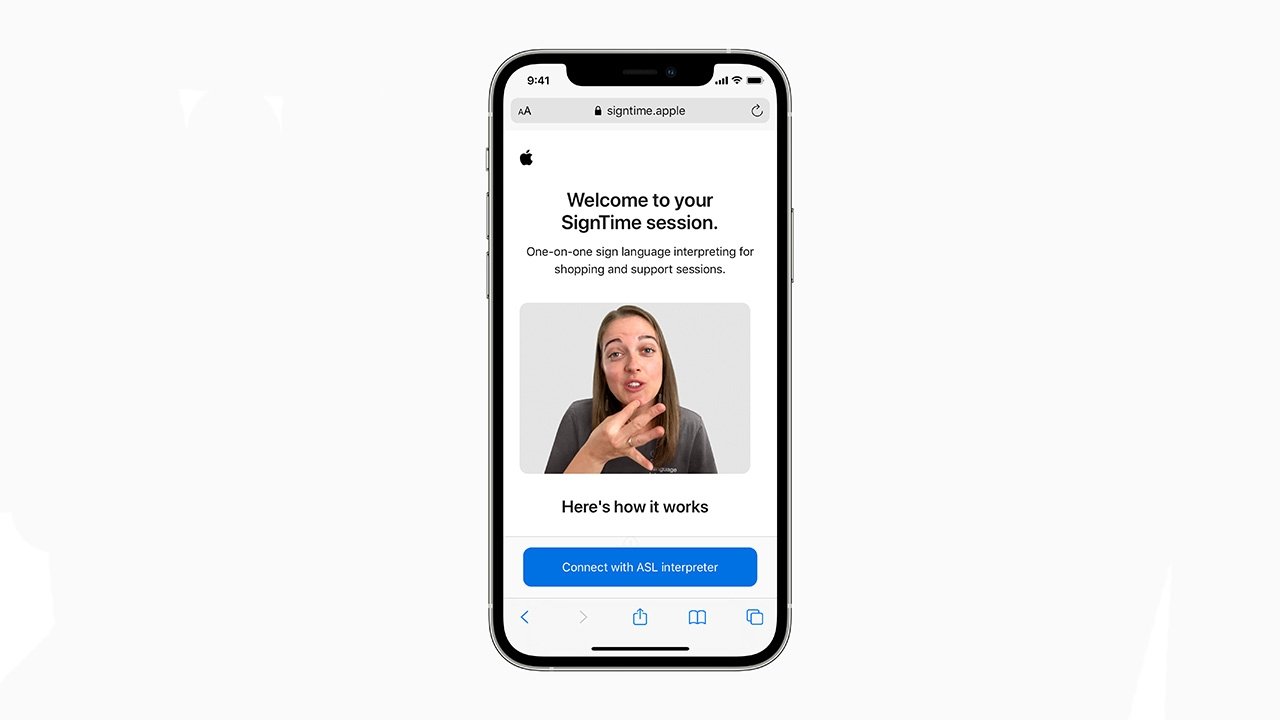 The new software features, which will be released in updates later in 2021, are specifically designed to aid accessibility for those with mobility, vision, hearing, or cognitive disabilities. Apple announced the new features ahead of Global Accessibility Awareness Day on May 20.

"These next-generation technologies showcase Apple's belief that accessibility is a human right and advance the company's long history of delivering industry-leading features that make Apple products customizable for all users," Apple wrote Wednesday.

One of the new features is AssistiveTouch for Apple Watch, which will use motion sensors, the optical heart rate sensor, and on-device machine learning to detect subtle differences in muscle movement and tendon activity. That'll allow users with upper body limb differences to use an Apple Watch without touching the displays or analog controls.

An iPadOS update later in 2021 will also introduce third-party eye-tracking support. That update will allow users with eye-tracking devices to control their iPads with just their eyes.

For iPhone users, Apple is introducing a new feature that will let blind or low vision users explore more details about the people, text, table data, or objects within images. The VoiceOver feature will describe various aspects of an image, and users can also add their own image descriptions via Markup.

Additionally, there will be a new Made for iPhone (MFi) update that introduces support for bi-directional hearing aids and support for audiograms in Headphone Accommodations.

In support of neurodiversity, Apple is also adding new baked-in background sounds to its iOS platform that could help users minimize distractions with various white noise settings or environmental sounds like ocean and rain.

For users who communicate in sign language, Apple is launching a new service called SignTime.

Customers who are shopping in store can also access a remote sign language interpreter without having to book a session in advance.

SignTime will launch in the U.S., U.K., and France initially. Apple says it has plans to expand to additional countries sometime in the future.

Apple is also launching new features, collections, and sessions in honor of Global Accessibility Awareness Day on May 20.

In the App Store, Apple is posting editorial story content highlighting apps like Filmic Pro and recommendations from TikTok influencer Lucy Edwards, who is blind. The Apple TV app will spotlight barrier-breaking characters, which celebrates authentic disability representation in film and TV.

Apple Maps will feature new guides from Gallaudet University to help connect users to businesses and organizations that "value, embrace, and prioritize the Deaf community and signed languages."

The company also highlighted its Today at Apple sessions offered in American Sign Language and British Sign Language, as well as some of the accommodations available in Apple Fitness+

"At Apple, we've long felt that the world's best technology should respond to everyone's needs, and our teams work relentlessly to build accessibility into everything we make. With these new features, we're pushing the boundaries of innovation with next-generation technologies that bring the fun and function of Apple technology to even more people -- and we can't wait to share them with our users," said Sarah Herrlinger, Apple's senior director of Global Accessibility Policy and Initiatives.