Apple Car airbags could save drivers from flying debris

AppleInsider
Posted: June 1, 2021 11:38AM
in Future Apple Hardware edited June 2021
Passengers of the Apple Car could be safer from injury of objects flying through the windshield in a car accident, with Apple considering various ways to block inbound shrapnel and other items from hitting the vehicle's occupants. 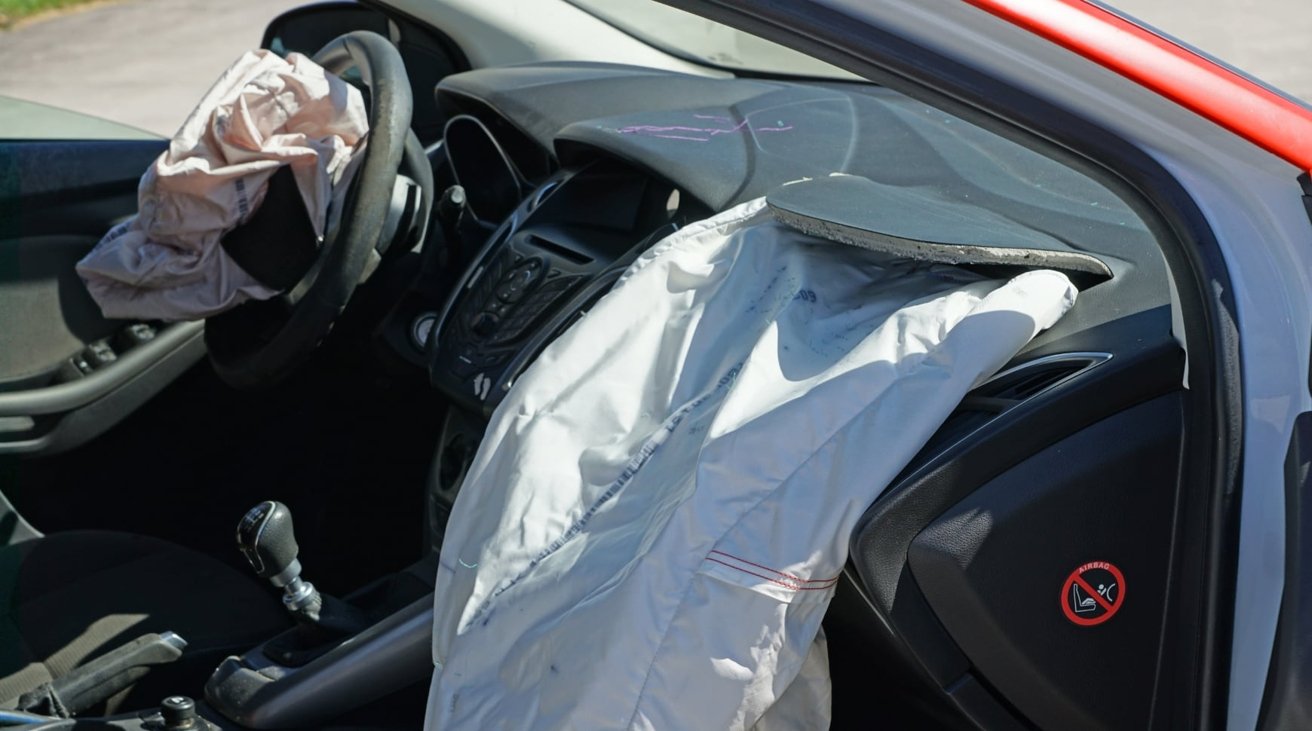 The vast majority of vehicle safety measures surround protecting the driver and passenger during the moment of an impact. From reinforcing the vehicle's body to airbags and seat belts, vehicles are designed to keep the humans inside from being majorly hurt.

However, there is one area that current vehicle safety systems cannot typically account for: flying objects. It's reasonable to assume that items hurled into the air from a crash, such as bricks from a wall or shrapnel from another vehicle, could pass through the windshield and potentially hit someone in the vehicle.

While windshields do deflect some of the debris heading its way, as well as lowering or adjusting the velocity of items impacting it, there is always a chance the windshield can fail and for an airborne item to become a major hazard.

Though the object is a factor, a bigger problem will be the shards of glass from the windshield itself that become airborne from an impact, as they could cut or seriously injure occupants.

In a patent granted to Apple by the U.S. Patent and Trademark office on Tuesday titled "Windshield area intrusion control," Apple considers this very scenario, and how a car could be designed to counter it.

Apple's system largely revolves around a reuse of the car airbag, but in a highly specialized way. Instead of cushioning the user, Apple proposes an airbag wall could be put in place that covers the windshield area completely.

An example of two airbags inflating to create a wall in the vehicle.

By hiding airbag walls in the roof and the instrument panel, airbags of various designs can be produced to fill up the space and block any items heading for the passengers. The airbag walls can take the blow from the airborne hazard, deflecting it or depleting its energy.

Extra structures could also be incorporated into the design, such as a film across the entire windshield that could hold back items stopped by the airbags.

While useful for sudden impacts, Apple also suggests a stronger version of the system, that takes advantage of the instrument panel. In some versions, portions of the solid instrument panel can swing on a hinged element to flip up and into place, covering a large section of the windshield area.

Though you could imagine the use of airbag walls could push the more solid instrument panel into place, Apple also suggests the use of a pyrotechnic or mechanical actuator to move it. While the former is a very quick and responsive method, the latter may allow the system to be reusable.

Examples of a movable section of the instrument panel creating a wall, and another airbag configuration.

Apple files numerous patent applications on a weekly basis, but while the existence of a patent indicates areas of interest for its research and development teams, it doesn't guarantee the idea will appear in a future product or service.

This is not the only patent Apple has secured related to vehicular safety, and not the only airbag-related one either. In May 2020, it received a patent for "Occupant safety systems," which covered the use of airbag-based cabin dividers to encapsulate passengers in a more openly-designed vehicle.

More famously, Apple has also proposed adding lights to car seats to explain its controls and to warn passengers to buckle up. Seats and seatbelts may also feature alternate airbag designs, automatically reconfigure themselves in preparation of an impact, and may even change to warn drivers of nearby hazards.

Rumors of the development of the Apple Car have frequently been bolstered by patents, which surface at a very regular rate. While potentially years away from release, Apple is reportedly in talks with various car producers to make the vehicle into a reality.