AppleInsider
Posted: June 7, 2021 9:52PM
in General Discussion edited June 2021
We recap all of the updates to Apple's major operating systems on the podcast, including Shortcuts coming to macOS, FaceTime and notification updates to iOS, iPadOS multitasking, plus new features for the Home and AirPods. 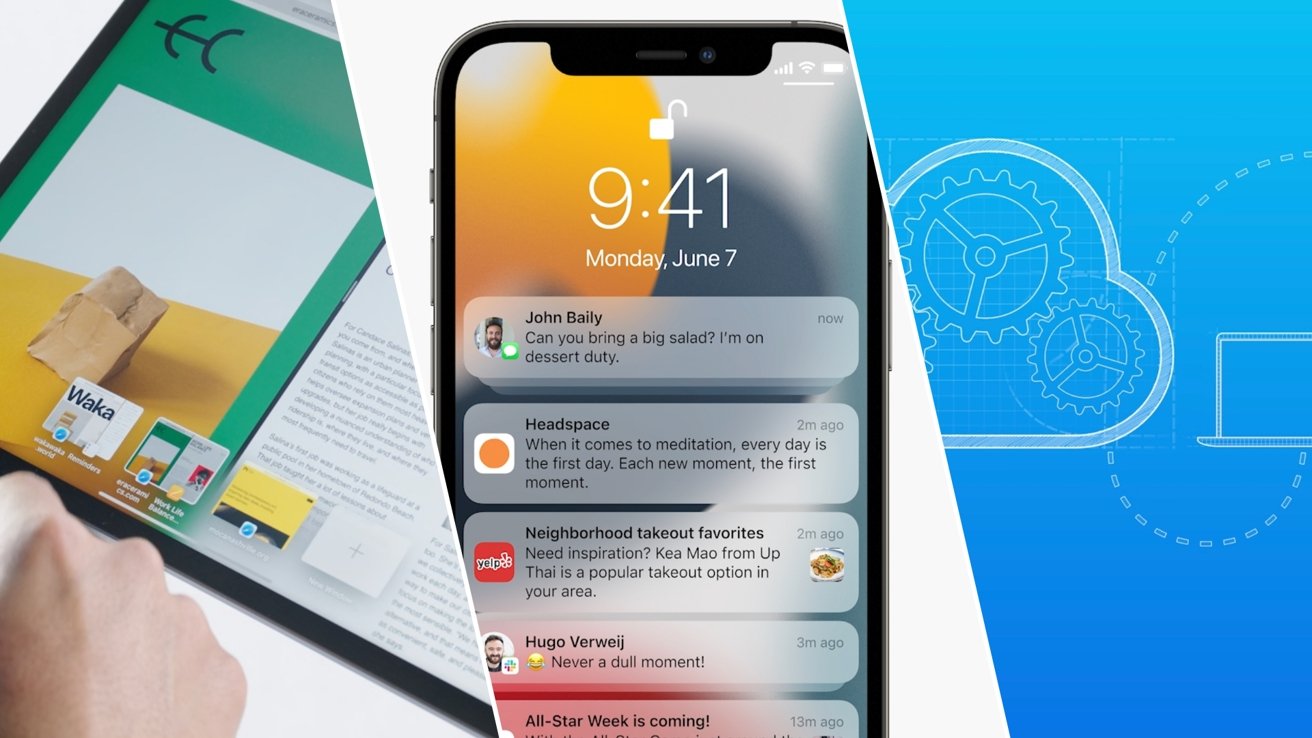 A lot was discussed during Apple's Worldwide Developers Conference keynote, and much more was later revealed in documents posted to the company's website. AppleInsider presents the presentation's highlights.

Apple kicked off this year's WWDC keynote with updates to iOS 15. Notable changes are coming to FaceTime including SharePlay, the ability to listen to music or watch streaming content with others during a FaceTime call. There is also a third-party API available and streaming providers such as Disney+, Hulu, and HBO Max have announced they will support SharePlay.

Notifications will get some design tweaks plus a new feature called Notification Summary. This will allow users to relegate notifications from certain apps to only be delivered in a notification digest, reducing interruptions throughout the day.

Apple also announced Focus, a new feature that will let users set different notification settings on time of day or location. Additional features were added to Photos, Weather, and Maps including live radar weather and a new 3D turn-by-turn navigation view. Wallet will soon support state ID cards including your driver's license that can be used at participating airports.

Many were hoping iPadOS would get significant updates this year to take advantage of the M1 iPad Pro, but that wasn't the case. Users will be able to place widgets anywhere on the home screen and utilize the App Library like on iPhone, but multitasking was only slightly updated.

Side-by-side apps remain the predominant form of multitasking, while a new menu option has been added to assist with opening new apps. A new Shelf feature displays active windows from currently running apps at the bottom of the screen.

Aside from the multitasking updates, Apple did announce new Translate features on iPad with a standalone app and system-wide translation tools. Swift Playgrounds was also updated with new features, including the ability to submit an app to the App Store directly from iPad.

Apple announced several privacy improvements including the ability to hide your location and IP address in emails and while browsing Safari. Using Apple's Mail app will also block senders from seeing whether or not you've opened a message. Siri is also updated to run more commands without an internet connection, and on-device processing should speed up many of its functions.

iCloud has been updated with Account Recovery and Digital Legacy, which allows users to specify family members that can help regain access to a locked iCloud account or take over your data after death. iCloud+ was also announced with Private Relay that obscures your internet browsing from tracking services, and the ability to setup unlimited HomeKit Secure Video cameras.

Health was updated with a new mobility feature that will track walking steadiness and fall risk. Other updates include improved lab results inside the Health app, trend reports, and the ability to share specific Health data with friends and family.

watchOS was updated with new health and workout features including the ability to track respiratory rate while sleeping. New workouts include Tai Chi and Pilates, plus the Messages app has been updated to include photo sharing and sending GIFs directly from Apple Watch.

Apple brought new features to the Home including keys in the Wallet app, and the ability to ask HomePod mini to play something on Apple TV. An improved Home app on watchOS will be coming and Apple is now allowing third-party device manufacturers to utilize Siri. Ecobee SmartThermostat is set to be the first third-party HomeKit device to support Siri.

The next version of macOS is called macOS Monterey and brings new Continuity features, including Universal Control. This will allow users to control multiple Macs and iPad with a single mouse and keyboard. Users will even have the ability to drag files across devices.

Apple is bringing Shortcuts to macOS, including a standalone app to build Shortcuts and the ability to launch them from Finder, the Dock, Share menus, and more. Safari is also getting a design overhaul with a new tab bar, tab groupings, and extensions are coming to Safari on iPhone and iPad.

New technologies for developers were announced including an API for Shared Playback controls, always on apps for watchOS, Concurrency in Swift, and 3D Object Capture.

Apple did not announce a new AirPods product at WWDC, but new features for the platform include Conversation Boost, which will allow users to focus on a person's voice, and ambient noise reduction. Better Find My integration is also coming and Spatial Audio will be supported soon in tvOS and Macs running on Apple Silicon.

The keynote concluded with updates to the App Store, which will allow developers to display different app icons and screenshots to different user demographics. In-App Events can highlight new features and app updates to users when they open the App Store app. Plus Apple announced Xcode Cloud, a new tool developers can use to compile code in the cloud and distribute via TestFlight for speed and collaboration.

If you have questions or comments on the show, tweet at @stephenrobles or email us here. Find us in your favorite podcast player by searching for "AppleInsider" and support the show by leaving a 5-Star rating and comment in Apple Podcasts.

Setapp: Head over to setapp.com and get access to hundreds of incredible Mac and iOS apps with a single monthly subscription! Try it FREE for 7 days at: setapp.com