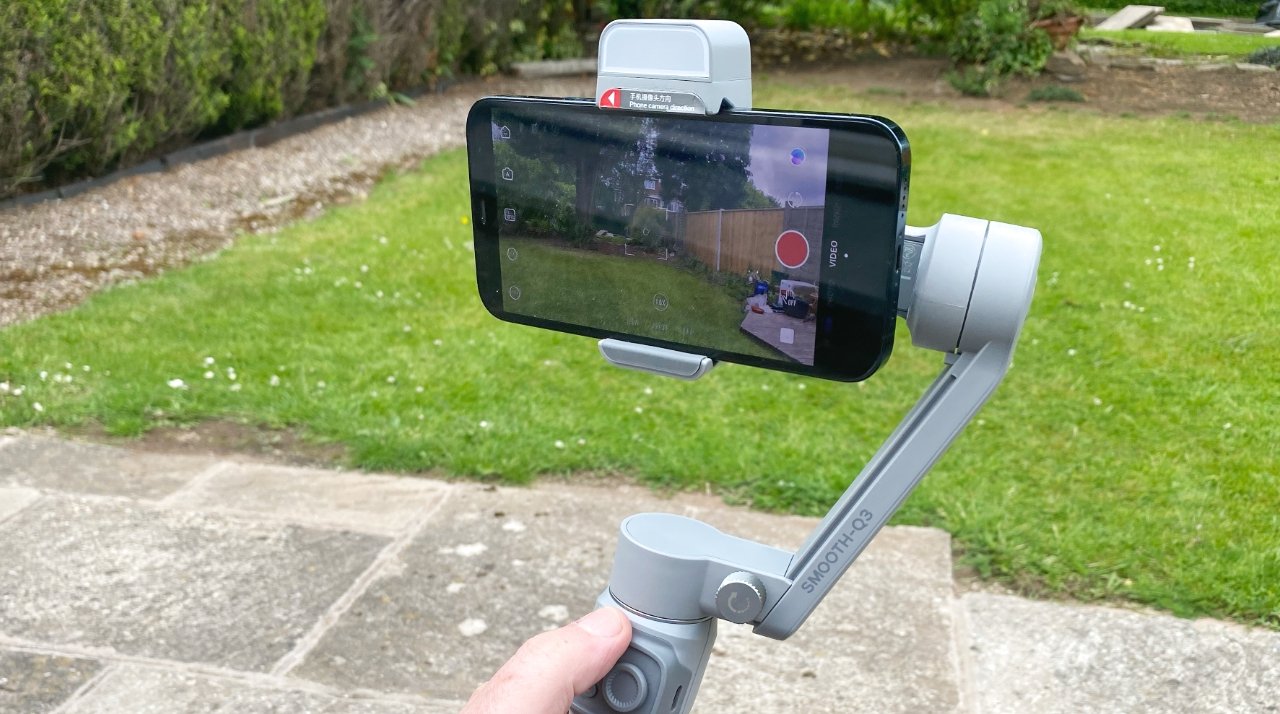 Whether you want to film your surroundings as you walk, or you burn to say, "Wassup guys, welcome to my YouTube channel," the Smooth Q3 gimbal can make you look better. While the iPhone has image stabilization to smooth out the video as you walk and talk, a gimbal does it dramatically more.

Plus, a gimbal like the Smooth-Q3 has a feature that keeps you perfectly positioned in the frame. Unlike Apple's Center Stage which zooms and pans the ultra-wide camera on iPad Pro, the Smooth Q3 physically moves the phone to follow you.

You can quickly tap to choose what you want to be followed, such as your face or perhaps a sports player. After this, unless your subject puts some effort into dodging out of the way, your framing is going to stay focused precisely where you want.

Equally, you're going to get good, long, continuous recordings of anything else you film. All gimbals give your footage a fluid motion and will ultimately improve your filming.

Given that they're all doing the same job, though, it's surprising how different they can be. The differences tend to be in their controls and the quality of their construction.

The Smooth Q3 adds a feature meant to -- and will -- make it explicitly appealing to YouTubers. Specifically, it comes with a light.

It's a fill-in light more than a spotlight, so it won't help in the dark, but it will give an even light to your face. It's such a good idea, and this part works so well that it's surprising that not all gimbals feature it. And it won't be any surprise if they all do in the future.

The Smooth Q3's LED isn't blinding, but it is very good as a fill-in light for filming YouTube videos

This is simply an excellent idea, and it works. There's no control for the light per se, but when the gimbal is on and facing you, you can tap the light to switch it on.

Then you can tap it again and again to cycle through a couple of different brightness settings before turning it off again.

It is specifically a face light. If you're shooting the other direction, it's probably not enough to sufficiently light what you're filming.

But for your face, it's exactly right. It means you can get an even exposure, although it isn't strong enough to be your sole light.

One issue with gimbals is that they can be big enough to be awkward to carry and expensive to protect. One of the Smooth Q3's predecessors, the Smooth 4, comes with a large protective case, where the new one has a soft case that's a bit wider, but maybe half the length.

It's immediately more convenient for carrying around in your luggage. This is possible because the Smooth Q3 is collapsible.

The new Smooth Q3 comes folded down, and even when fully opened, it is a little shorter than the previous model.

Where a typical gimbal is one long device with a grip for your iPhone at the top, the Smooth Q3 is initially a stubby little device that actually won't do anything. Instead, you have to loosen a fastening screw, pull up the gimbal's head to its maximum, then re-fasten that screw.

That head has two angles of motion. One lets an arm rotate, and the other is a grip for the phone which rests at the end of that arm.

With the Smooth Q3, the phone grip is tricky to get used to. There is a label telling you which way to position the phone, which is helpful. However, after relatively little use, the label came loose.

The whole device does feel plasticky and flimsy, at least compared to its predecessor. But it also feels noticeably lighter, and since you're going to be holding it for extended periods, that's overall a benefit. 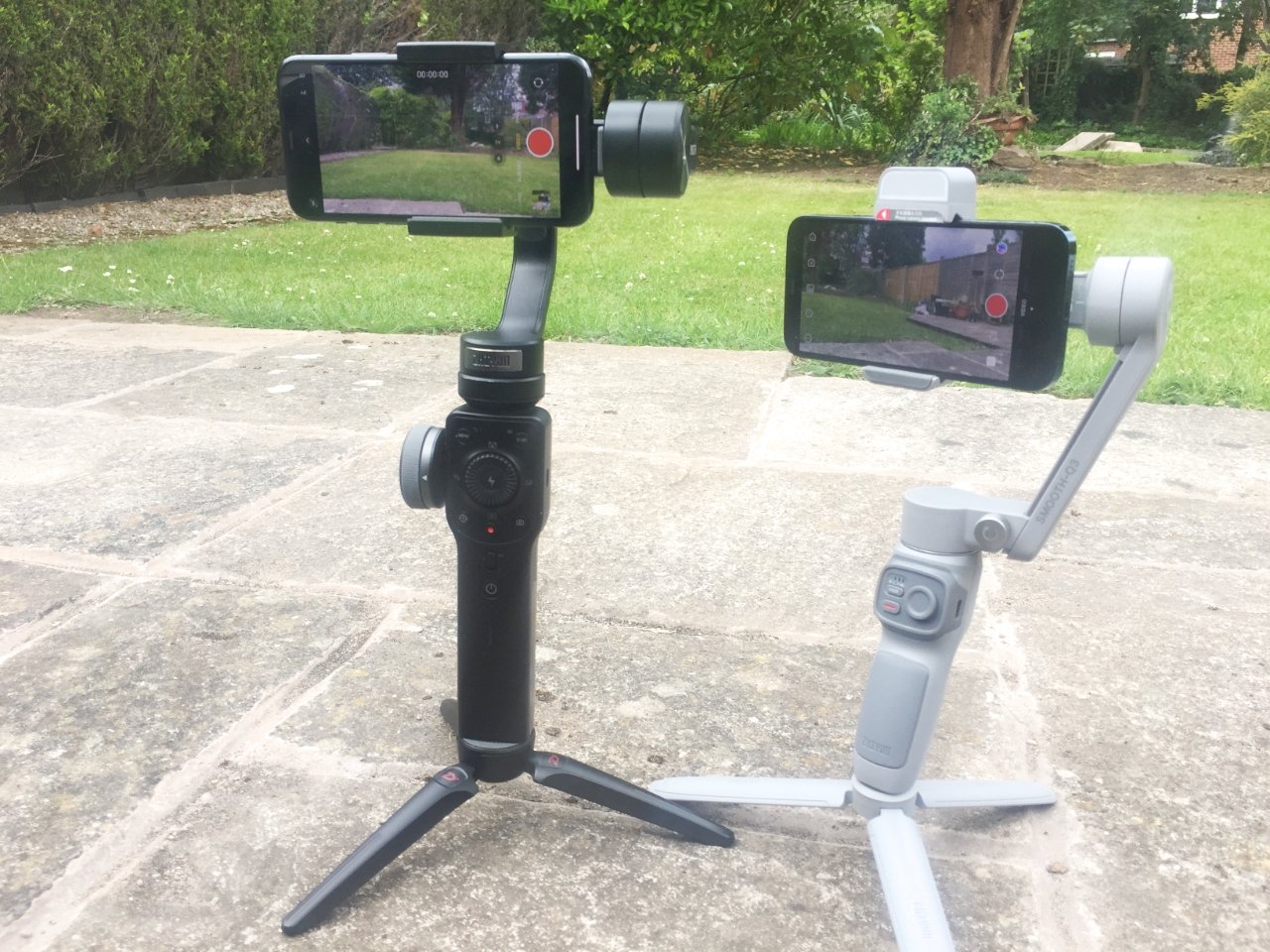 Left: Smooth 4, right: Smooth Q3. The Smooth 4 is a little taller on its stand and in your grip. Plus it does feel more sturdy

Fitting the phone takes getting used to, as well. That's mostly good because it means the grip is extremely tight. Plus, there's also the very nice touch that the molding is angled so that the grip does not press on the phone's side buttons.

That makes it significantly easier to position the phone at any point you need. There should be just one spot where the phone sits correctly, and the gimbal can balance it without using any power.

That position does vary depending on your phone, but if you, say, connect a lapel mic directly to the phone, you'll alter its center of gravity.

Finding that right spot took a lot of fiddling, and it was easier with a lighter phone than a heavier one. It's rated to hold a smartphone weighing up to 280 grams, and a thickness of between 7mm and 10mm.

That means even the iPhone 12 Pro Max should be supported, but it was easier to slip in an iPhone 11 Pro than an iPhone 12 Pro, for instance. However, that could be down to the strength of the grip, which is a good thing when you're putting a thousand dollars' worth of phone on a stand.

As you grip the gimbal, there is a small LED panel in the front with a flattened joystick. There's also a couple of buttons on one side of the gimbal. On the back is both an on/off button and a trigger switch.

That trigger, which is used to turn recording on and off, is positioned well. However, the power button is harder to find without looking. When you do press it without looking, though, you're able to see the LED indicators light up.

Confusingly, though, what happens first is that one of the four green LEDs flashes rapidly. You will automatically assume that it's telling you there's no or low power in the gimbal, but it's just saying it's starting up.

Not only do you need to physically position the phone in the gimbal, but you also have to pair the two devices over Bluetooth. This should be simple as there is a Smooth Q3 app that guides you through it.

There is also an optional associated subscription service called ZY Prime. For $1.99 per month or $19.99 per year, subscribers can perform basic video editing online through the service.

It's also intended to support live video on social media, where it helps with face tracking.

The app has links to all of this, but its chief function is to enable pairing between the Smooth Q3 and your iPhone. The only real frustration with the gimbal, though, was that sometimes the pairing would not work.

This partly down to how fickle Bluetooth can be. Still, on occasion, both the iPhone and the gimbal had to be restarted before they would see each other.

That, plus the way you have to extend the gimbal plus balance the phone, means that it isn't something you'll whip out at a moment's notice. But then no gimbal is.

This isn't like a selfie stick, where the purpose is speed or fun. Instead, gimbals are for making better videos, and if it takes some more time to set them up, the results you get are a price worth paying.

The resetting and restarting to get Bluetooth working isn't. But while that happened a few times, it didn't happen regularly, and it wasn't possible to deliberately recreate the problem. So your mileage may vary -- but we think it's worth it. 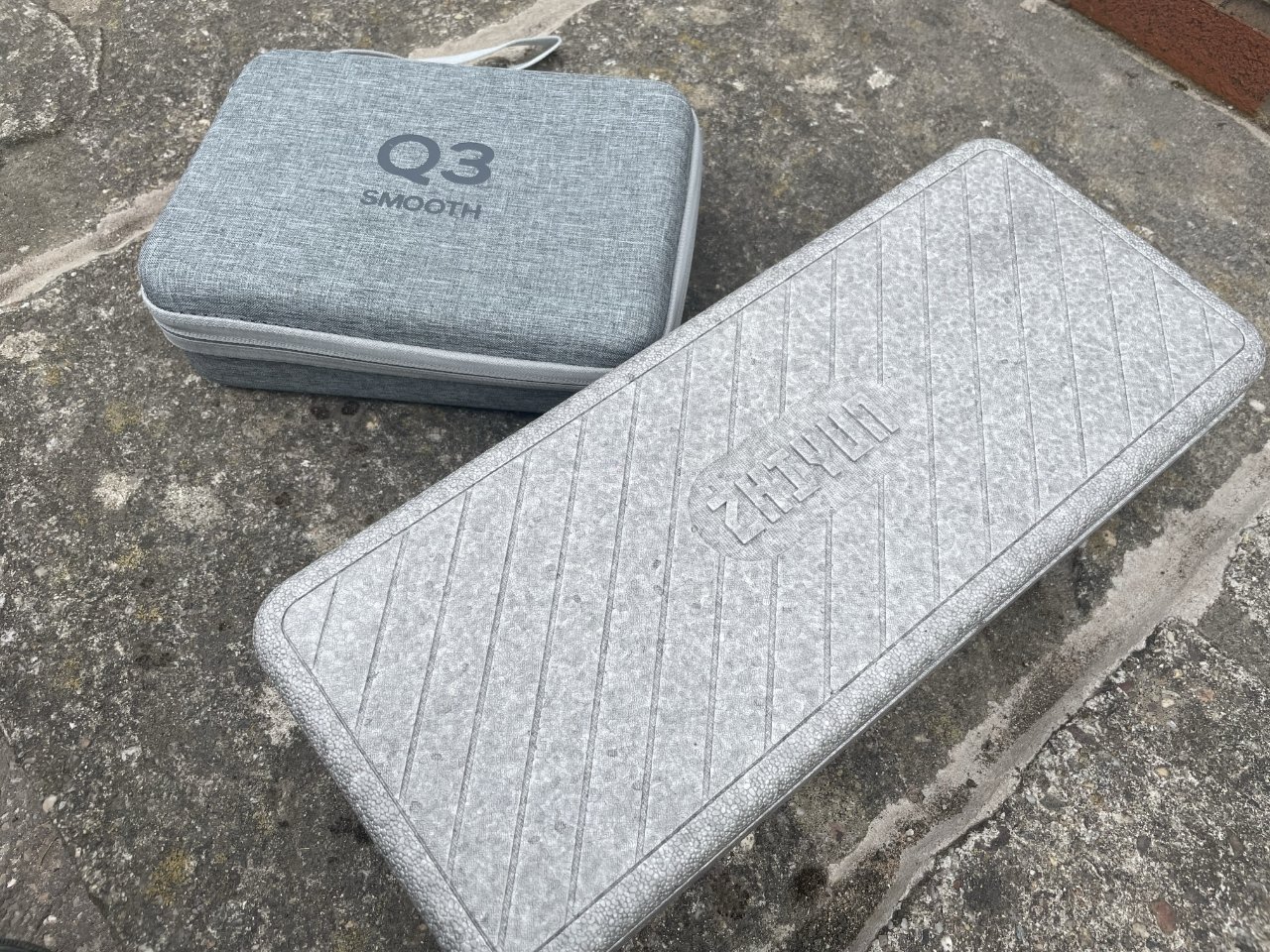 The new Smooth Q3 is much more compact than its predecessor, the Smooth 4

Yes. There are alternatives, and this manufacturer's previous models, such as the Smooth 4, are still available.

The Smooth Q3 offers lightness and, because it can collapse down to half its full length, it also provides portability. That light on the top is either of no interest or of supreme interest, depending on what you're filming.

It's not as sturdy feeling as the previous Smooth 4 model, though. Yet being able to collapse the gimbal down changes how often, how readily, and how easily you will bring it with you on a shoot.