AppleInsider
Posted: July 21, 2021 6:38PM
in General Discussion
A 22-year-old UK citizen has been arrested in connection with a 2020 hack that promised a doubling of Bitcoin promised through high-profile Twitter accounts, including Apple's. 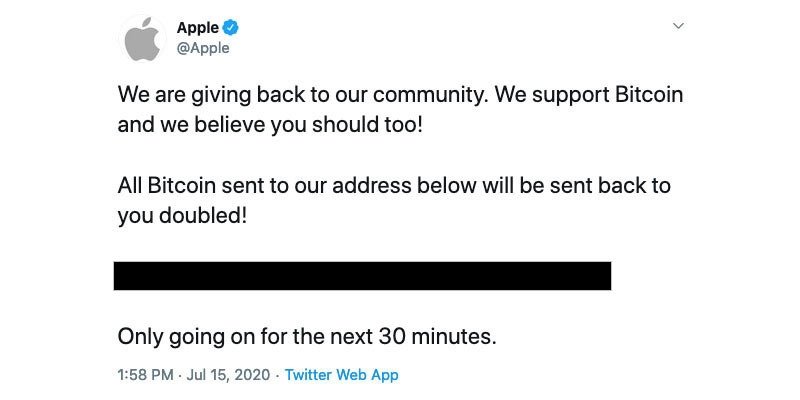 The Department of Justice said that Joseph O'Connor was arrested by Spanish authorities on Wednesday in Estepona, Spain. U.S. officials had sent a request for his arrest, as O'Connor is being charged by a criminal complaint filed in a U.S. federal court in California.

The hack occurred on July 15, 2020, and affected more than 130 Twitter accounts belonging to companies, celebrities, and politicians. As part of the scam, the attackers posted messages on those accounts asking followers to send Bitcoin to a specific cryptocurrency wallet under the pretense that double the amount would be sent back.

The FBI San Francisco Division is investigating the case, along with the IRS Criminal Investigation Cyber Unit, the U.S. Secret Service, and the Santa Clara County Sheriff's Office.

Multiple people have already been arrested in connection to the cyber attack, including a 16-year-old from Massachusetts and a 17-year-old from Florida.

Bitcoin ledgers indicated that people responding to the scam sent a total of 12 Bitcoin, worth about $140,000 at the time. The attackers also accessed the private direct message inboxes of up to 36 high-profile accounts.

In March, one of the teenagers arrested in the scam agreed to three years in prison in a plea deal.