AppleInsider
Posted: August 17, 2021 12:38PM
in Future Apple Hardware edited August 2021
A possible Apple Magic Keyboard could detect which user is typing, and adjust between chiclet and mechanical feel and sound to suit them. 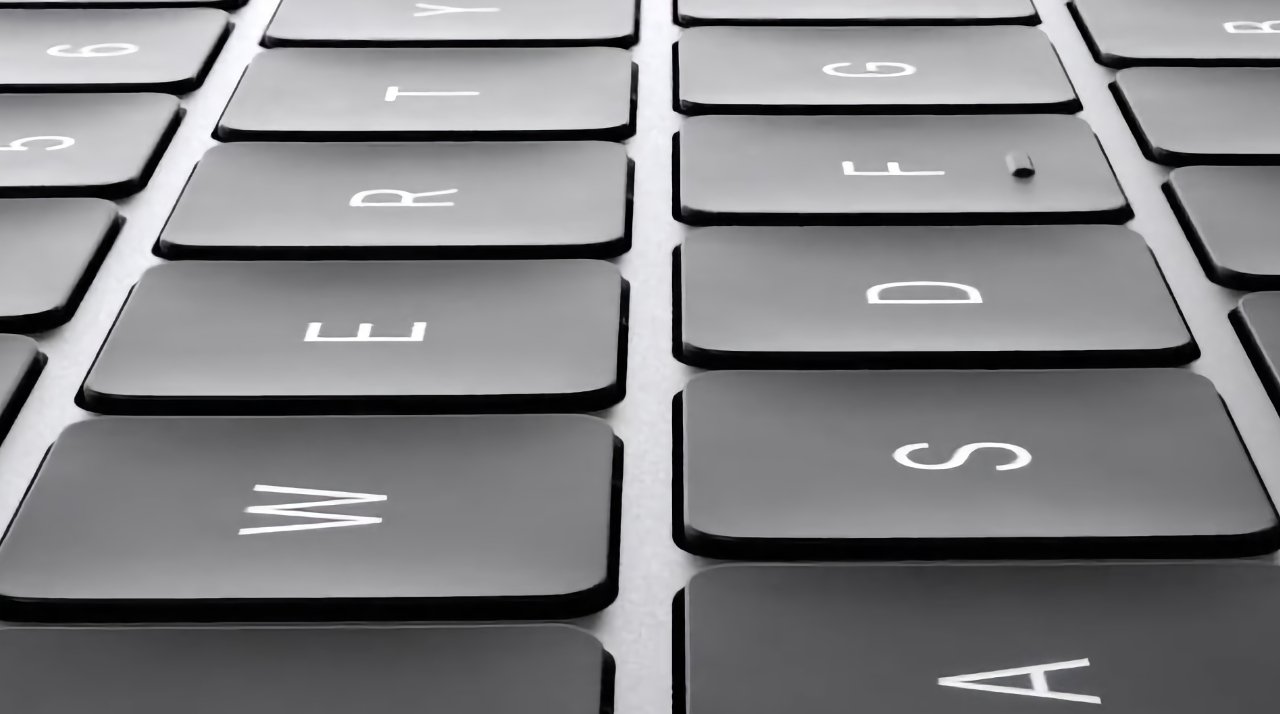 Apple has tried a lot of different keyboards

Previously, Apple gave us all the notorious butterfly keyboard, and then eventually it replaced those with a new scissor-key system. In each case, though, it was all or nothing -- and now Apple looks like it wants its keyboards to be far more customizable.

So you could be happy whether you like the very light touch of the butterfly keyboard, you prefer the low-travel Magic Keyboard, or you just love heavy mechanical keys. A newly granted patent explores how such a vastly adjustable keyboard could be made -- and even how it could help avoid the problems that came with the butterfly keyboard.

"Keyboard with adjustable feedback," is concerned with the design of an adjustable keyboard, but that is specifically for the manufacturer as well as the end user.

"For devices such as keyboards that have interrelated mechanical and electrical parts, testing and prototyping can be excessively expensive and slow," says the patent. "In order to experiment with new technologies or new force feedback profiles for key switches, entire prototype keyboards need to be built and delivered."

"The feel and sound of the interaction of these parts can be unpredictable and can therefore require iterative design techniques with round after round of new prototypes being ordered, constructed, tested, evaluated, and revised," it continues. "Within the fast-paced world of computing device development, these iterative processes can be overly limiting and inefficient."

Apple's patent also recognizes that once a manufacturer has gone through this long process, the user is stuck with whatever they came up with.

"[Most keyboards] are substantially static in their feel and sound once they are in end use," says the patent. "End-users and third party sellers are mostly unable to customize and control those factors."

"What seems like comfortable and satisfying feedback to one user can be deemed completely inadequate (e.g., overly noisy, stiff or mushy) in feel to another," it continues. "Accordingly, there is a persistent need for various improvements to the implementation of keyboards and related input devices for electronic devices."

One last possibility is that some future MacBook Pro could identify different users, based on their typing characteristics, and adjust to their pre-set preferences.

"User identities can be determined while a user types on a keyboard based on the force applied to the keys, the speed of the typing, whether the keys are pressed all the way down to a bottom-out condition, whether user-identifying mistakes are made while typing, and other factors," says Apple.

"These factors can be analyzed in order to determine the identity of a user via their typing characteristics, and the user's identity can then be used to control or change computer functions or to change the nature of the feedback provided by the keyboard."

To achieve all of this, Apple breaks down the components of a keyboard into the keycaps, stabilizers that keep the key even as it's pressed, and then encoders and actuators.

An encoder measures the force of a key press and its distance, amongst other factors. Then an actuator can be made to provide physical feedback to the user.

This patent is credited to three inventors, including Daniel A. Greenberg, and Thomas R. Matzinger. Their previous related work includes a patent for altering a device's feedback depending on environmental conditions.

Apple applies for very many patents every year, and among its other recent ones is an alternative system for keyboards. Instead of this self-adjusting keyboard, future MacBook Pro models could use a deformable touchscreen instead of mechanical keys.