AppleInsider
Posted: September 7, 2021 10:01PM
in General Discussion edited March 4
Twitter on Tuesday activated a "hashflag" for the upcoming "California Streaming" Apple event scheduled for Sept. 14, with the tech giant reserving use of the special #AppleEvent icon until December. 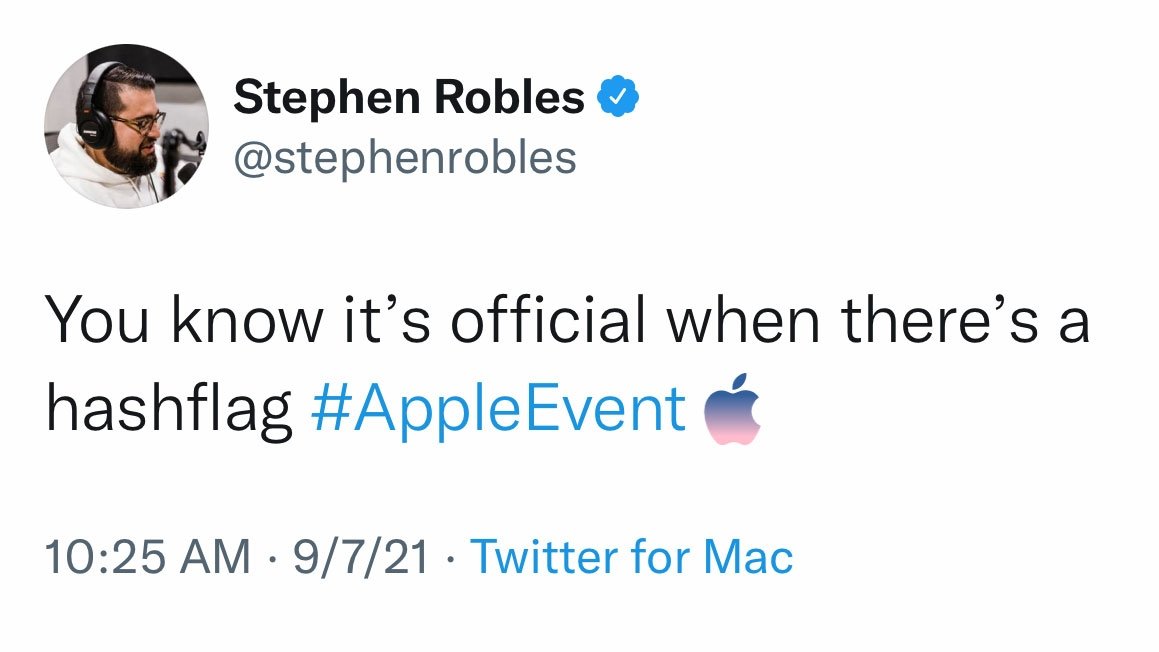 According to researcher Jane Manchun Wong's Hashflag Browser, Apple has reserved use of the "AppleEvent" hashflag through Dec. 6, suggesting the company plans to hold additional online gatherings before year's end. The tech giant's hashflags are typically active for a week -- two weeks for the Worldwide Developers Conference -- before being pulled when the referenced event concludes.

Previous rumors have tipped multiple hardware events this fall, where the iPhone maker is predicted to introduce a slew of products ranging from new Apple Silicon MacBooks to revamped iPad and iPad mini models.

The hashflag went live at around 1 p.m. Pacific and is now appearing next to #AppleEvent hashtags on Twitter.

Apple's first foray into hashflags dates back to the iPad Air and Apple Watch Series 6 launch last September. The company again turned to the feature in promotion of the M1 iMac, iPad Pro, Apple TV 4K and AirTag in April.

Most recently, a rotating cast of hashflags was dedicated to the Worldwide Developers Conference in June. The effort borrowed images from iMessages' Tapback feature, which lets users quickly react to messages using a heart, thumbs-up, thumbs-down, "HAHA," two exclamation points or a question mark icon that appears as a response bubble atop texts.

In addition to the hashflag, Apple is promoting its Sept. 14 event with an AR Easter egg and the usual Siri teaser.

Apple is expected to introduce "iPhone 13" and "Apple Watch Series 7" next week, potentially alongside an AirPods refresh. AppleInsider will be covering the event live from 10 a.m. Pacific.