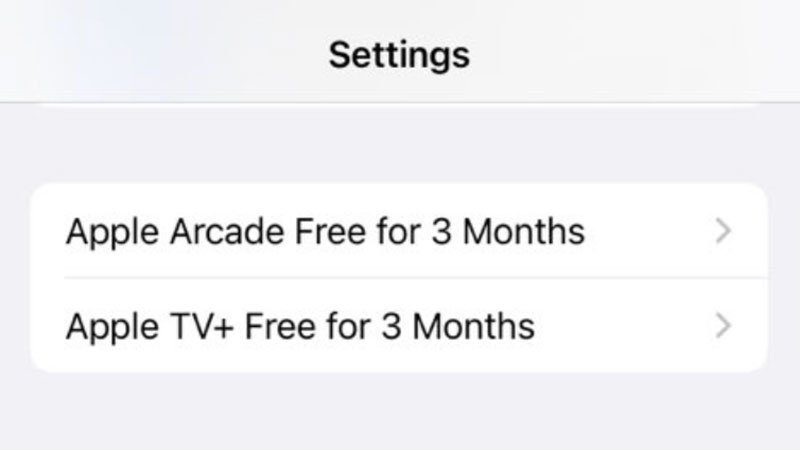 The selections, which appear just below a user's Apple ID and above all system settings, invite users to take advantage of free trials for Apple's various services. Users have reported seeing three- and six-month trials for Apple Music and a three-month trial for Apple Arcade, though advertisements for other services might also be in effect.

It appears that the options are displayed only when a device user is not a current subscriber, meaning Apple is likely referencing its services database to activate the ad on a per-user basis. Some users have been able to dismiss the ads by interacting with them, according to reports on social media.

When the advertisements began to appear is unclear, but online reports detailing the promotions date back to at least Oct. 4.

For Apple, which acts as a platform operator and competes with service providers on said platform, the promotional placement could prove problematic as it navigates a string of antitrust complaints both at home and abroad.

As noted by Epic Games CEO Tim Sweeney, who is currently embroiled in an international legal battle over App Store policy, the option to place advertisements in prominent areas of iOS is unavailable to competing services. In a tweet on Wednesday, Sweeney implied that the Settings app offers are an abuse of power.

The static ad spots comes amid intense scrutiny of Apple's business practices, which have been called anti-competitive by developers, government agencies and lawmakers. The App Store, with its up to 30% commission rate and restrictions against third-party app stores, has been of recent interest, but Apple is also under the microscope for a range of potential issues including platform dominance, restricted hardware access and a walled garden approach to apps and services, among others.

In efforts to appease critics without dismantling a lucrative source of income, Apple is making piecemeal concessions to slowly reshape App Store policy. In August, the company reached an agreement to settle a class action lawsuit that opposes App Store fees and commissions. If granted, the deal would create a $100 million fund for small developers and allow app makers to contact customers about alternative payment methods.

A more recent concession saw the tech giant announce a modification to App Store policy that will allow "reader" apps to link out to the web for account management purposes. The change, which will take effect worldwide, was made to close an investigation into App Store policy conducted by the Japan Fair Trade Commission.