AppleInsider
Posted: October 21, 2021 9:07AM
in General Discussion edited October 2021
On October 21, 1991, Apple launched the PowerBook and every other laptop and notebook computer from that day forward to today's MacBook Pro was changed because of it. 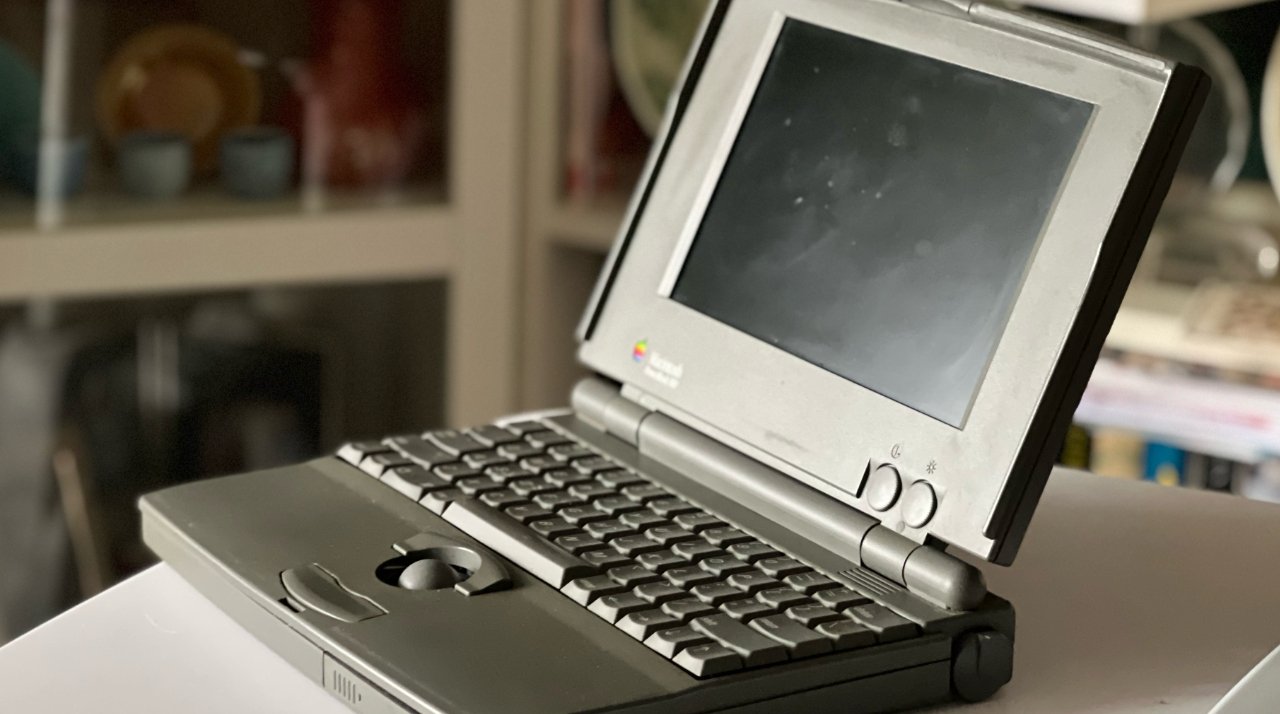 Steve Jobs was not responsible, or even present, for every Apple success back in the day. He had nothing to do with the PowerBook, a laptop computer that had Apple's typical way of taking a well-established industry, and completely changing it.

To be fair, though, Apple could have done with Jobs at the launch of the PowerBook 100, PowerBook 140, and PowerBook 170. Perhaps October 2021's MacBook Pro launch was a little overblown with hyperbole, but 1991's PowerBook launch should have been.

Then as now, the new machines had features that were genuinely impressive. Arguably, though, it was the 1991 launch that was the most startling as it was the PowerBook that introduced a built-in mouse, and pushed the keyboard to the back.

At the time, all PC notebooks and laptops had the keyboard at the front so that when you were in a confined space, the typing angle on your fingers resembled a ballet dancer's feet tapping away.

When you were at a desk, the typing angle meant you held your wrists high until they hurt. The only break you would get is when you reached around to plug in a cable mouse or, so much worse, a kind of Rube Goldberg-machine which clipped a trackball onto the side of the machine.

All of which did give PC notebooks a wide, open space between the keyboard and the screen that was used for... nothing at all.

What Apple did was what Apple famously always does. It thinks through the way that a real person will use a device. It designs the whole thing, the company does not treat design as paint to be slapped on later.

Consequently, there cannot have been any rival notebook manufacturer who saw the launch and didn't immediately wonder how they missed this.

Yet perhaps it's a sign of just where Apple was in the industry, and in its fortunes, at the time. Because where Steve Jobs would have given the launch audience a claptrap - a moment where you are instinctively drawn to applaud -- the 1991 presenters were practically apologetic.

It was as if they were saying look, honestly, this is big, and paradoxically that just made it all seem small. That said, a great part of the presentation was about showing how much smaller PowerBook components were to the previous Macintosh Portable.

Reviews at the time all referred to that Portable's shortcomings as a computer and advantages as a boat anchor. They also praised the PowerBook's keyboard and trackpad design, but back in 1991, it must have still seemed possible that DOS laptops were the future.

"If you use a GUI [Graphical User Interface] to keep your computing tasks sorted out, the Mac does it best, especially for notebook computing," said Byte magazine's review. "The PowerBook's centrally located, built-in trackball favors neither hand and avoids the bolt-on headaches that plague most PC pointing devices."

"The integration of applications with the communications software has no equal," it continued. "I expect PC notebooks, which have already mimicked the Mac's GUI with Windows 3.0, to imitate many PowerBook features."

That reference to communication software is another aspect that now seems trivial, but then was enormous. Apple's PowerBooks made it point-and-click simple to dial in to servers, or desktop Macs, or other PowerBooks, and have full access to the hard drives there.

"But before you start thinking that Apple has captured nirvana in gray - make that 'granite' - plastic," wrote MacUser magazine, "be advised that the PowerBooks do have a few limitations. For instance, there is no built-in support for Ethernet -- nor is it available as an option. This could make connecting to Ethernet networks a problem or be, in Apple-ese. a 'third-party opportunity.'"

MacUser also pointed out that Apple shipped the PowerBook 100 with 2MB of RAM and that this was simply inadequate to run the then-current System 7.0.1. 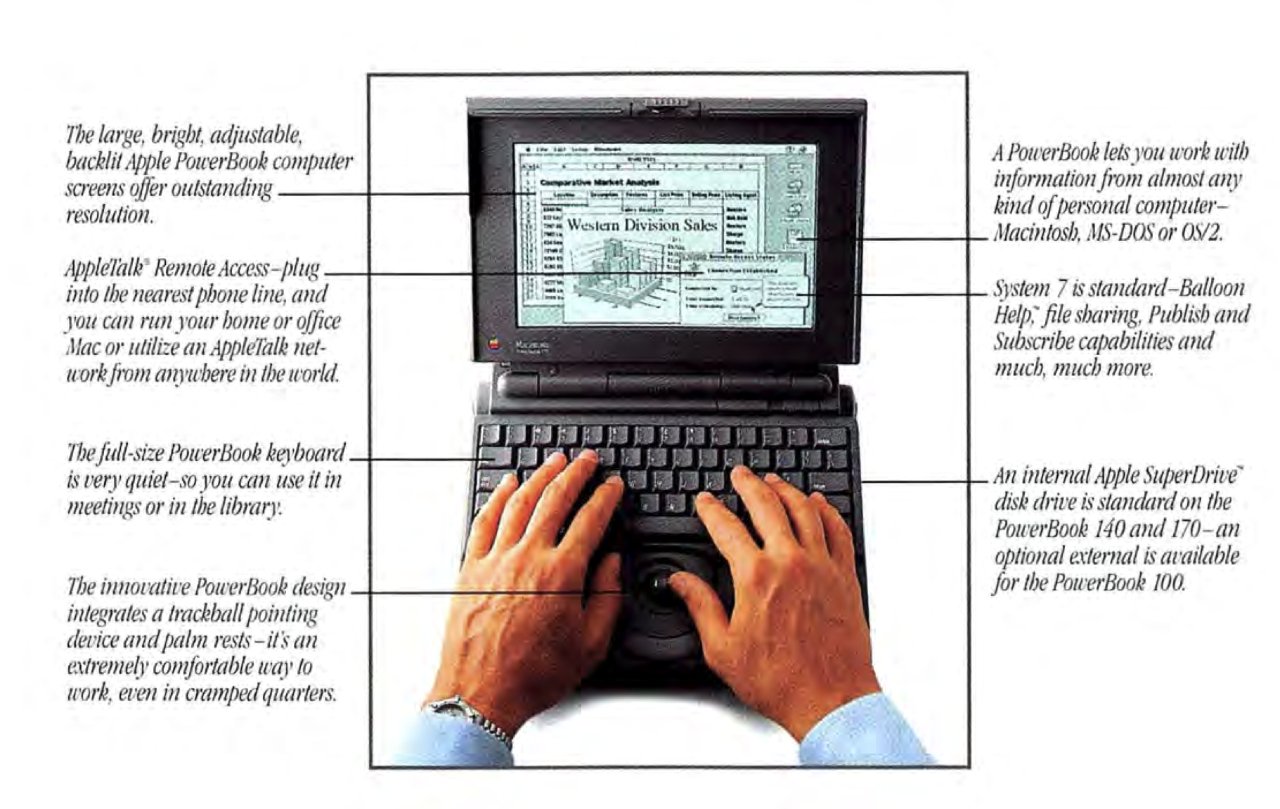 Original print ad for the PowerBooks in 1991

As genuinely industry-changing as the PowerBook 100, PowerBook 140, and PowerBook 170 were, it's not as if they were without problems, or that they escaped criticism.

Not surprisingly, they were expensive. Although at the time, all notebook computers were costly enough that Apple was not occupying the highest end.

Today the most costly MacBook Pro, the most maxed-out 16-inch MacBook Pro, costs $6,598.98 -- and that's if you also include the Final Cut Pro and Logic Pro that Apple always tries to push you into getting. 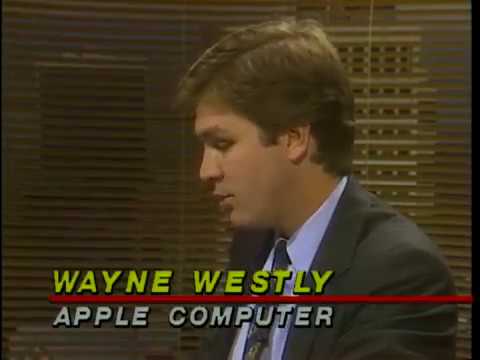 Problems with the original PowerBooks

All of these differences are of course less about criticizing the original PowerBooks and more about marvelling at how far things have gone. Yet there were actual problems with these first machines, problems that were recognized at the time.

A serious one concerned the PowerBook 100, designed for Apple by Sony, which saw a recall in 1992. Some 60,000 PowerBook 100 units were recalled because an electrical short meant a small hole could be melted in the casing.

Over time, though, people also found that the little plastic door covering up all of the ports on the back would snap off. The little rotating feet on each model weren't the strongest, either.

But in day to day use, there was also the screen. Except for the PowerBook 170, which had an active matrix display, the screens on the PowerBooks were passive.

This meant that if you moved the cursor too quickly, it would disappear, then reappear when you stopped moving it. Some people at the time called this a feature instead of a bug, describing it as a game of Submarine Commander.

Moving on from the originals

All PowerBook screens improved over the 1990s, and added color too. There were models that remain classic favorites to this day, and there were ones that hardly seemed to register even when they were launched. 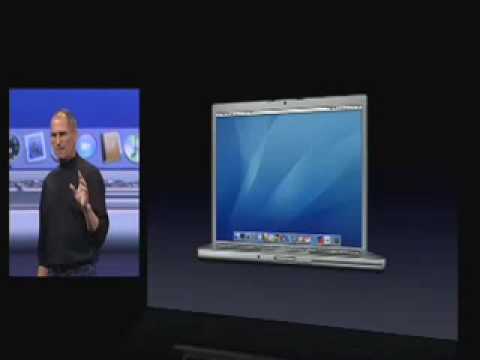 By then, Steve Jobs was back at Apple, and he said, "it's a new name because we're kind of done with 'power,' and we want Mac in the name of our products."

Jobs made every moment sound like a triumph and he got applause at every step, but compared to 1991, the new features launched were good, not industry-changing.