AppleInsider
Posted: October 22, 2021 6:45PM
in Current Mac Hardware
Ahead of the official release of the new 14-inch and 16-inch MacBook Pro models, images of the devices in the wild are starting to appear online. 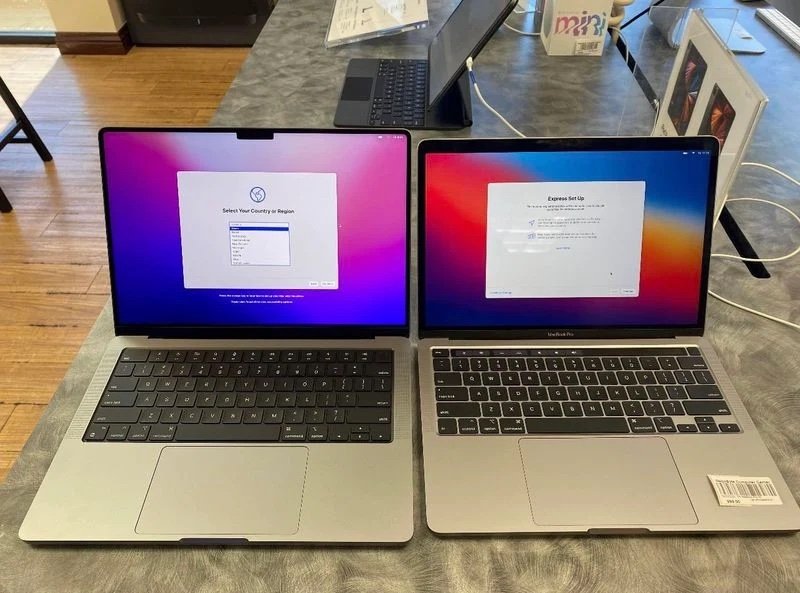 One Reddit user, for example, shared an image of the 14-inch MacBook Pro next to a previous-generation 13-inch MacBook Pro. The image underscored the differences between the two models, including the notch, slimmer bezels, and all-black keyboard design.

The comparison image between the 14-inch MacBook Pro and 13-inch MacBook Pro has since been deleted, but AppleInsider obtained a copy of the image. It appears to have been taken inside either an Apple Specialist shop or similar, and was in all likelihood deleted because the source of the image could be easily hunted down by Apple itself.

In addition, another Reddit user shared a brief unboxing of a 14-inch MacBook Pro model, in what also appears to be a computer shop.

The unboxing clip shows off the thicker chassis of the device, as well as Apple's signature packaging style.

Apple's new MacBook Pro models are powered by upgraded M1 Pro and M1 Max chipsets. The 14-inch model starts at $1,999, while the base 16-inch model retails for $2,499. Both models officially launch to the public on Tuesday, Oct. 26.