AppleInsider
Posted: January 4, 2022 2:53PM
in General Discussion edited January 4
OWC has introduced a number of storage products for photographers and content creators, including the Atlas FXR CFexpress card reader and a number of high-performance memory cards. 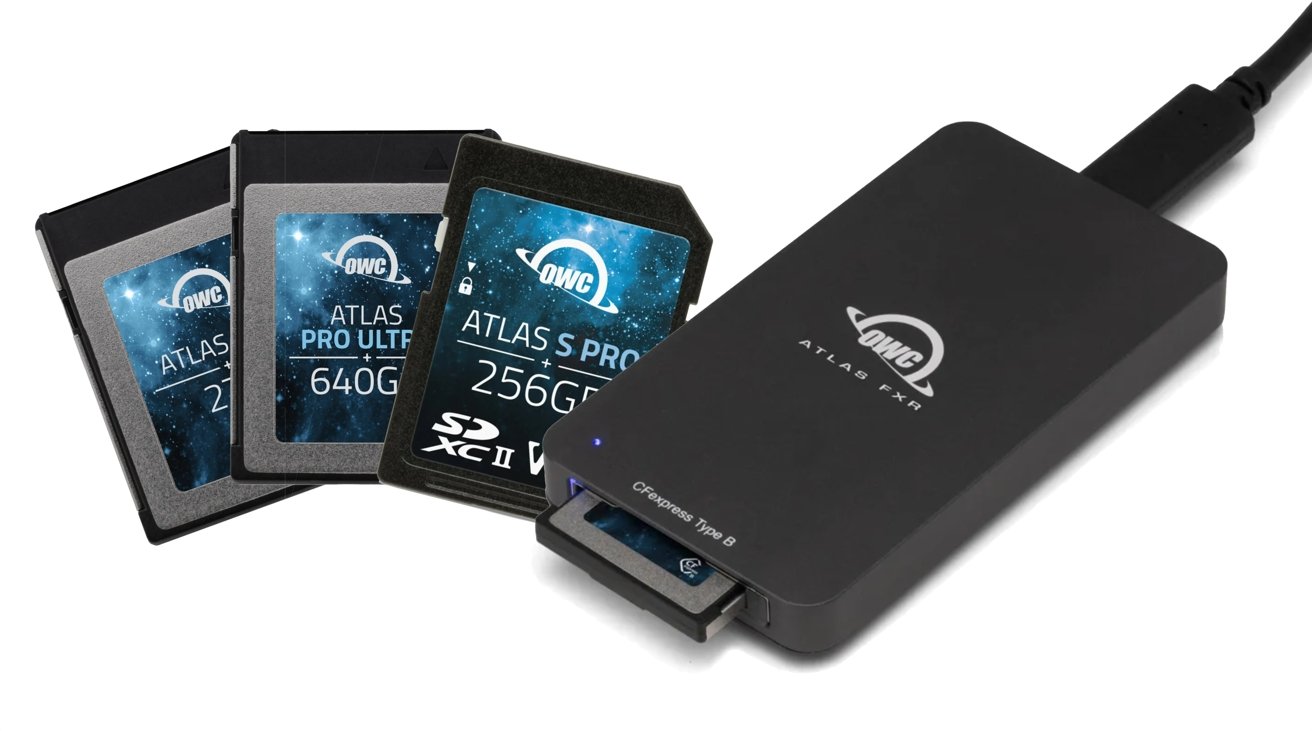 The OWC Atlas Pro range is said to provide photographers shooting RAW images and videographers working in 8K to get the highest workflow efficiency possible. The collection consists of memory cards with high data rates, as well as a similar high-speed but also small card reader.

OWC claims the Atlas FXR is the smallest CFexpress card reader that can work with a Thunderbolt connection, though it operates on 10Gbit USB-C. Similar in size to a credit card and roughly a seventh of the size of similar readers, it is extremely compact and able to be carried around at ease.

Bus-powered, it can connect to any Thunderbolt or USB-equipped Mac, PC, or tablet, using its included Thunderbolt cable with tethered USB-A adapter. and is capable of transfer speeds of over 1,500MB/s.

OWC aims to release the Atlas FXR in early 2022.

The OWC Atlas S consists of SD UHS-II V90 cards, offering speeds of up to 276MB/s for writes and 290MB/s for reads. It does so with pseudo-Single-Level Cell (pSLC) flash memory for 10-times the durability of other SD cards, along with the high speed.

OWC is selling the Atlas S Pro SD card ranges in capacities from 32GB to 256GB, starting from $49 on its online store.

The Atlas Pro and Atlas Pro Ultra CFexpress Type B cards are aimed at the more professional end of the market, with the cards offering extremely high transfer speeds. The Ultra models are capable of sustained 1,400MB/s speeds for burst modes and 8K capture, with peak write and read speeds of 1,500MB/s and 1,700MB/s respectively.

They're also rugged, including impact, bend, shock, UV, and x-ray resistance. They are fully compatible with modern Canon, Nikon, and Panasonic cameras, will work with XQD devices, and fully meets CFexpress Type B 1.0 and 2.0 specifications.

OWC will be releasing both Atlas Pro and Atlas Pro Ultra CFexpress cards in the second quarter of 2022. The Pro will be offered in 256GB, 512GB, 1TB, and 2TB capacities, while the Ultra will be in 320GB and 640GB varieties.