AppleInsider
Posted: April 29, 2022 2:17PM
in iPhone
Any iPhone or Apple lover will appreciate Grid Studio's nostalgic art pieces that are made of vintage devices such as the original iPhone or Apple Watch. 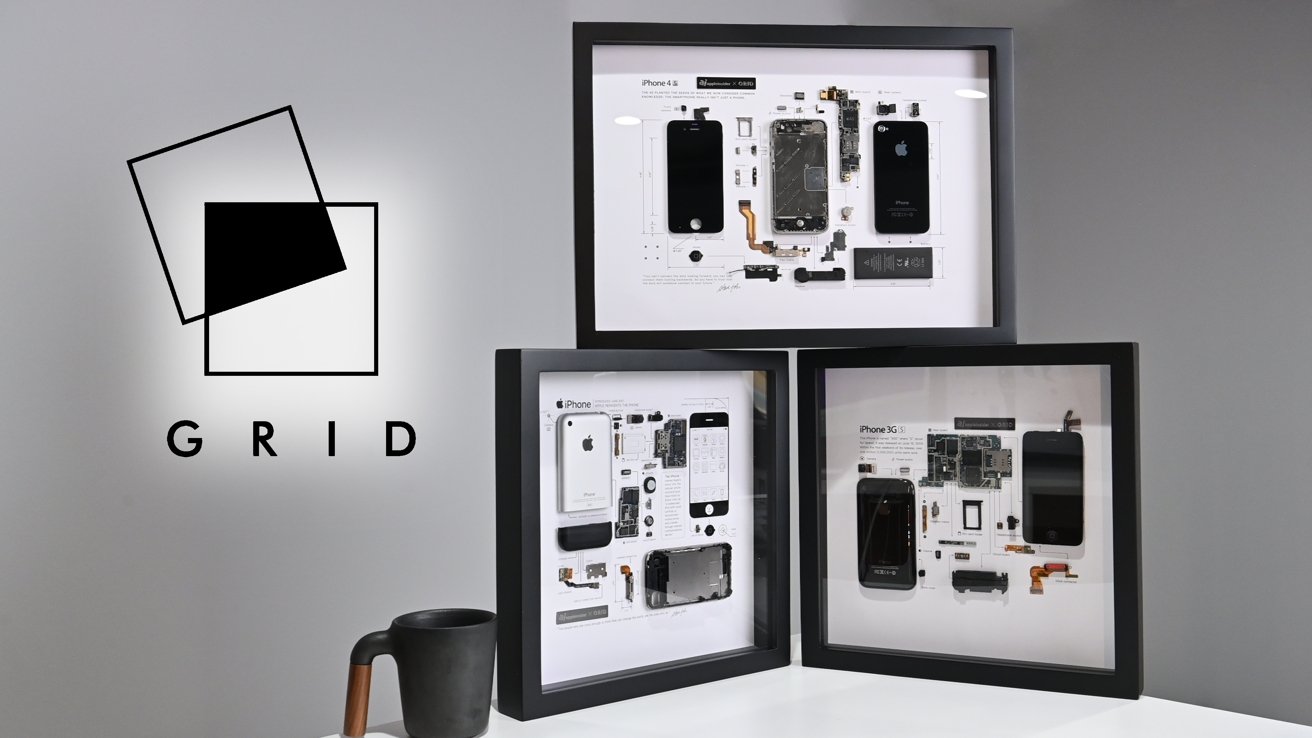 Grid Studio has put a ton of effort into all details of its artwork. Each frame arrives, handsomely wrapped in matte black paper. This not only protects the art, but gives you that feeling of opening a gift when they arrive.

Instead of a paper receipt or packing slip, you'll then see a wax-sealed envelope. You break past the custom-stamped wax seal to gain access to the documents within. 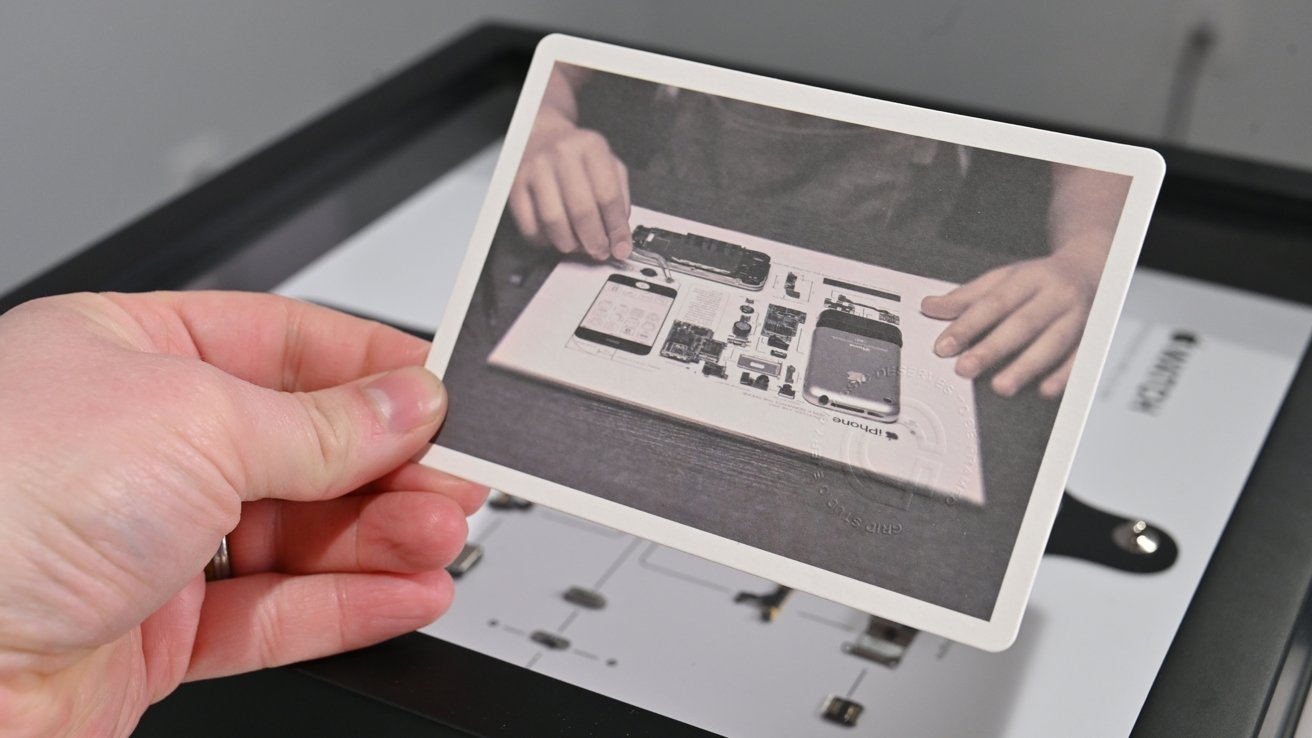 Inside the envelope, you'll find a thank you card, a QR code for a chance to win a giveaway, as well as two pieces worthy of display. One of those is a cream-colored photo showing a Grid frame being assembled. It's embossed with the grid logo. 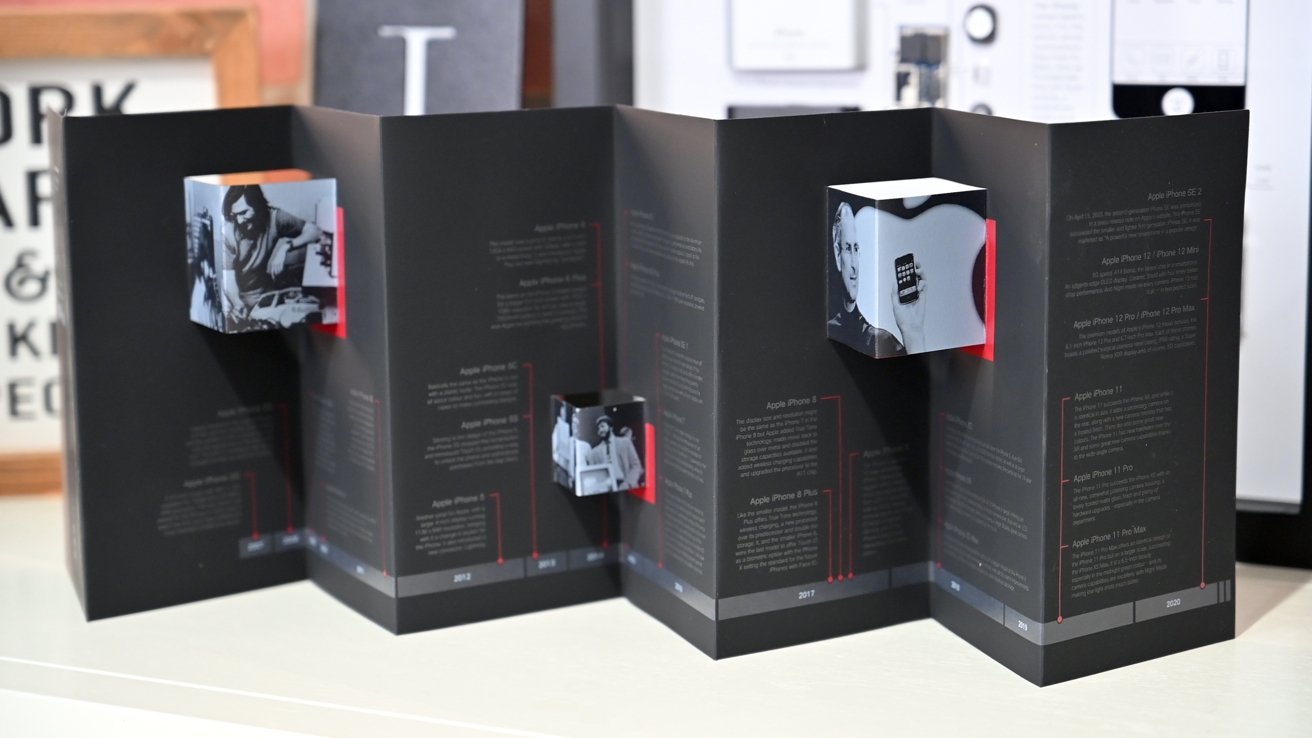 The timeline of iPhone

The second piece for display is an accordion-folded timeline of the iPhone. It's a high-quality, thick paper with a soft-touch matte finish on one side. It expands to show the iPhone's history -- from the original launch in 2007 to the iPhone 12 in 2021.

We'd love to have an updated timeline to incorporate the iPhone 13, but it will surely get tedious for the company to create new ones each year yet -- let alone the added length. The way it's folded allows these vintage images to stick out in 3D. It feels like something we'd see in a museum.

Apple Watch is one of the most personal devices Apple has ever created and it holds a special spot in our hearts. Throughout the day, we check in with our Apple Watch more than our iPhone. It has helped us stay up to date, stay healthy, and stay connected more than any other device.

With that, we were beyond excited to own the original Apple Watch preserved in this unique piece of art. 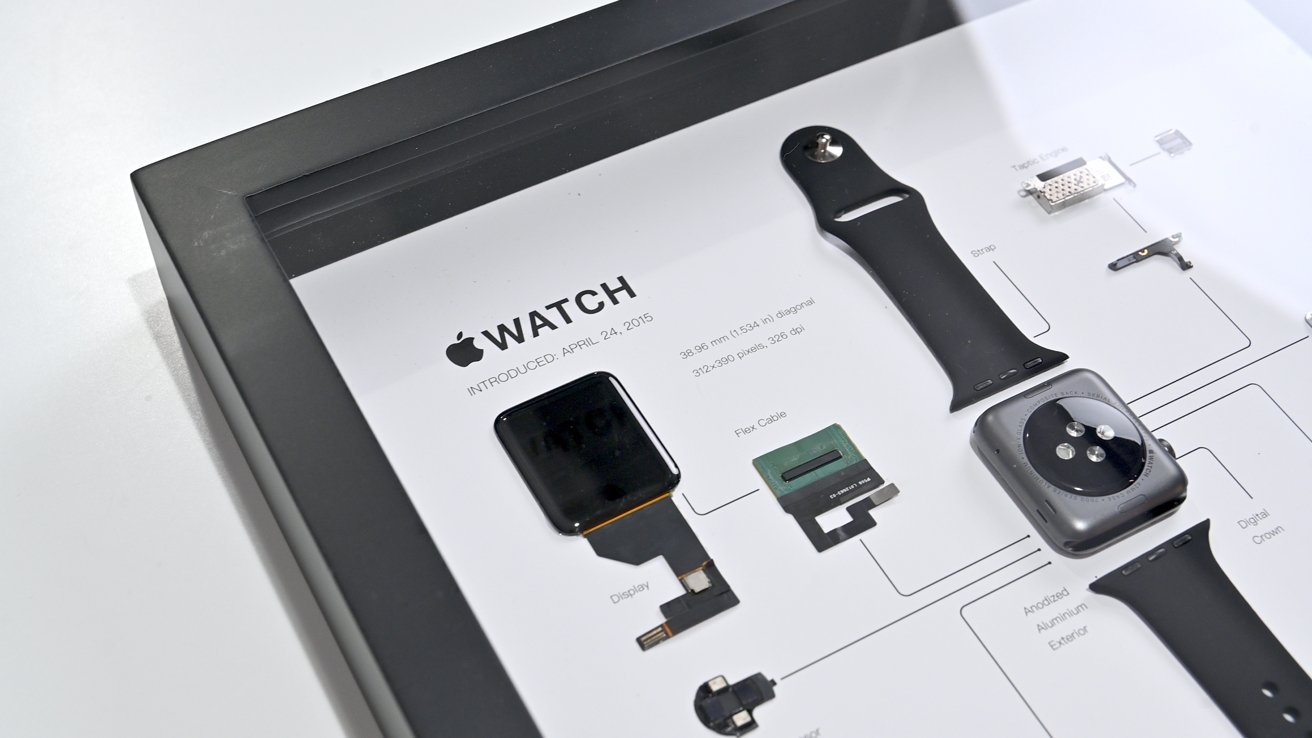 Released in 2015, the original Apple Watch was a marvel. Despite its capabilities, there are shockingly few components to see. 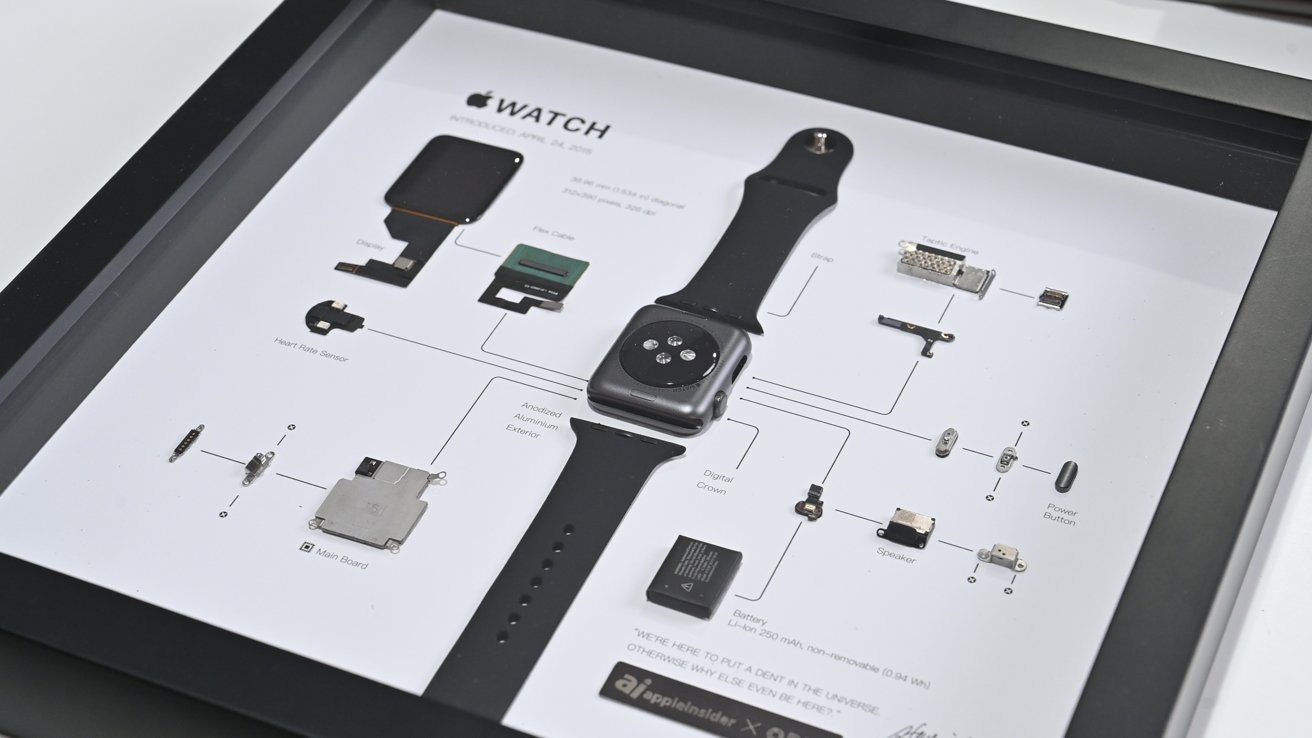 Closeup from the original Apple Watch

The largest pieces include the band, the aluminum body, and the display. Other interesting components include the heart rate sensor, the Taptic engine, The S1 processor, and the speaker.

Grid lays out the components neatly with clean lines showing how it all goes back together. One minor thing with our particular frame -- the lower strap isn't straight. It isn't parallel with the body and it's just off enough to bother us, but not big enough to be an issue.

In frames, such as this Apple Watch model, that include a battery, a fake battery is used so it is safe to store, display, and ship. However Grid creates the fake batteries, they look identical to the real deal.

Our model also was bestowed with a custom-milled AppleInsider X Grid placard. It's a nice touch to make this piece more unique.

Arguably the most sought after piece from Grid's lineup is the original iPhone. It's incredible to see where this phone started. 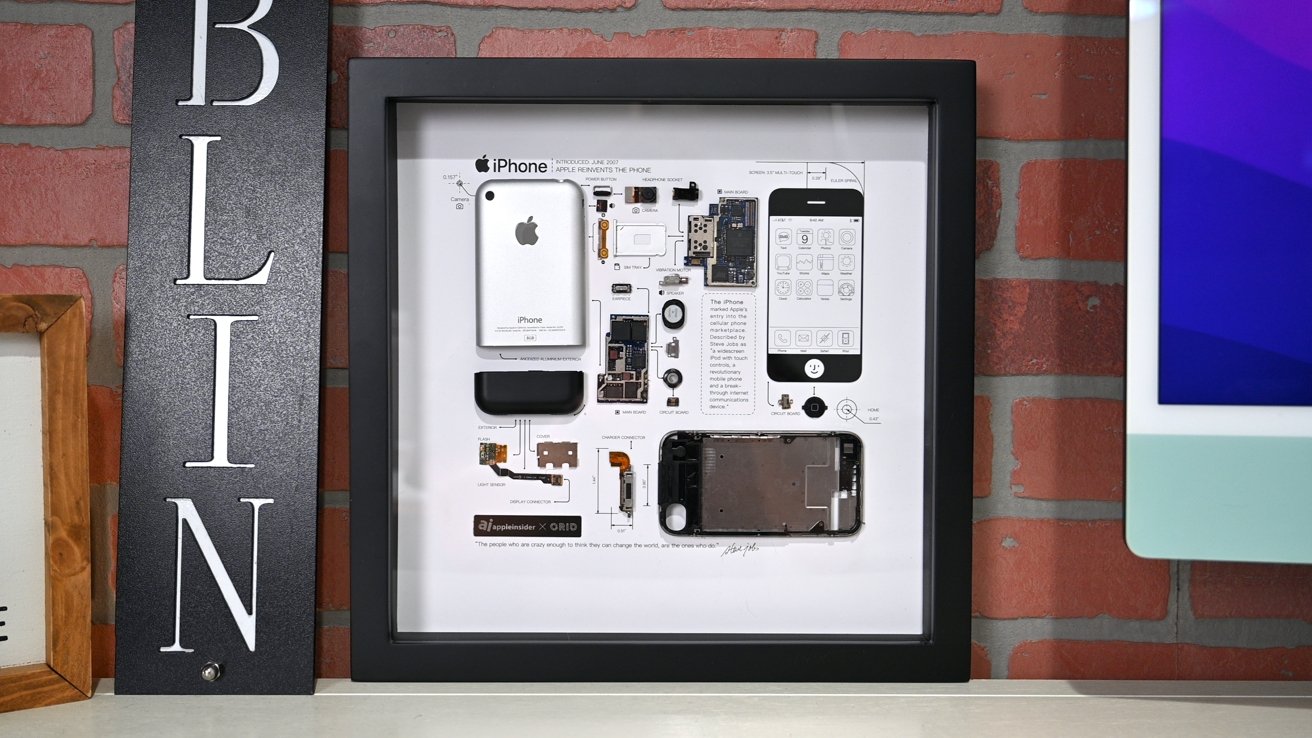 This model has its own little touches that we love. There's a Steve Jobs signature just below a quote that reads "The people who are crazy enough to think they can change the world, are the ones who do."

Back then, the iPhone used full-sized SIM cards and the circuit board was split into multiple pieces. 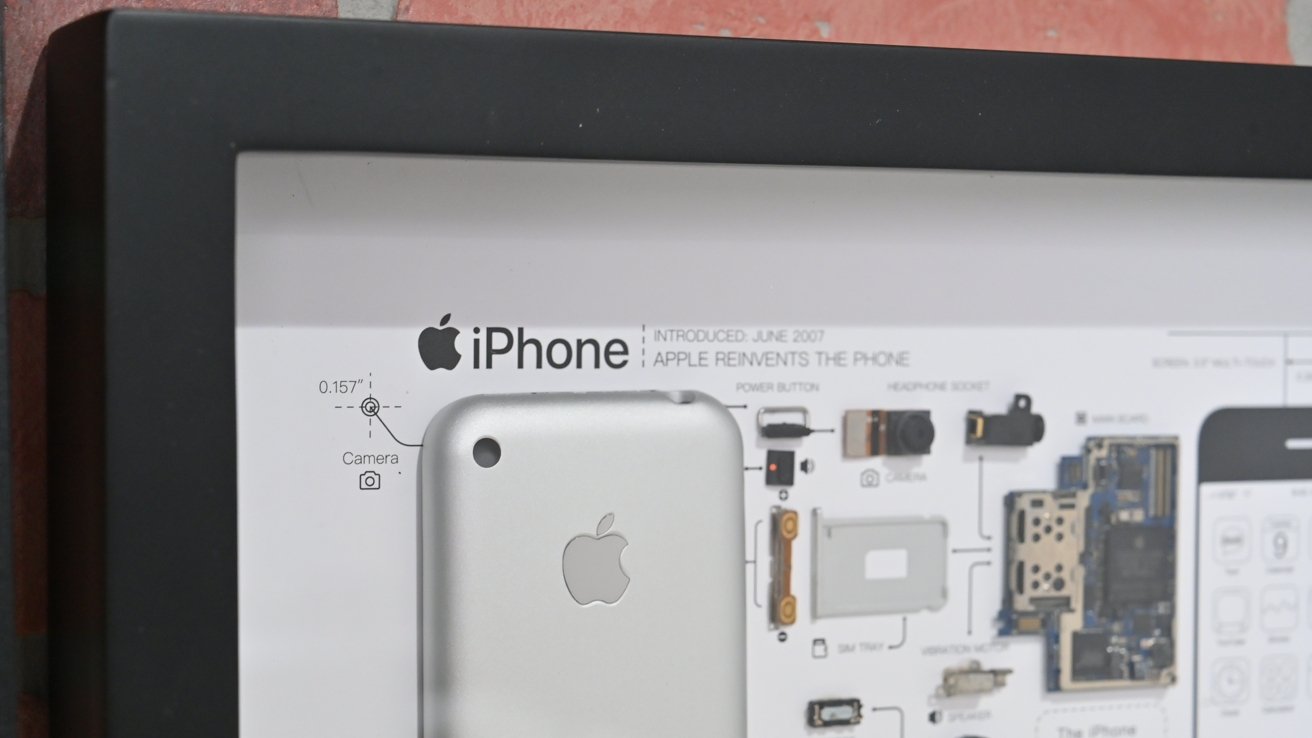 You can peep at the old-school 30-pin dock connector that was used when placed into the charging dock -- the one Apple graciously included with every iPhone. The camera module is also adorably tiny, capable of only 2MP photos.

This will surely be the ultimate collector's piece for any Apple fan.

The iPhone 3GS was the third-generation iPhone and was unveiled back in 2009 at Apple's WWDC conference, then held at Moscone West Center. As Phil Schiller put it, the S stood for speed.

Apple had yet to debut its A-series processors and instead was still relying on a Samsung-made chip. Even so, it was said to be twice as fast as its predecessor. 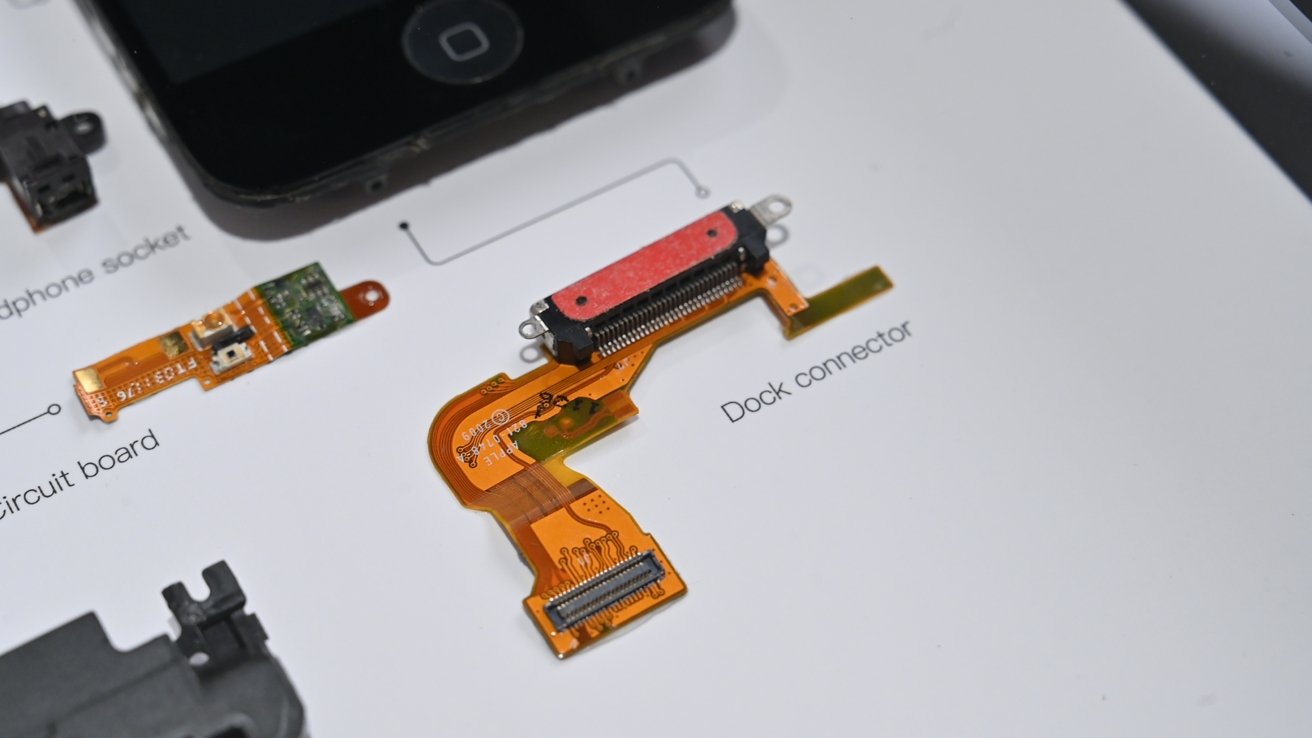 The processor is visible on the large mainboard featured in the frame. 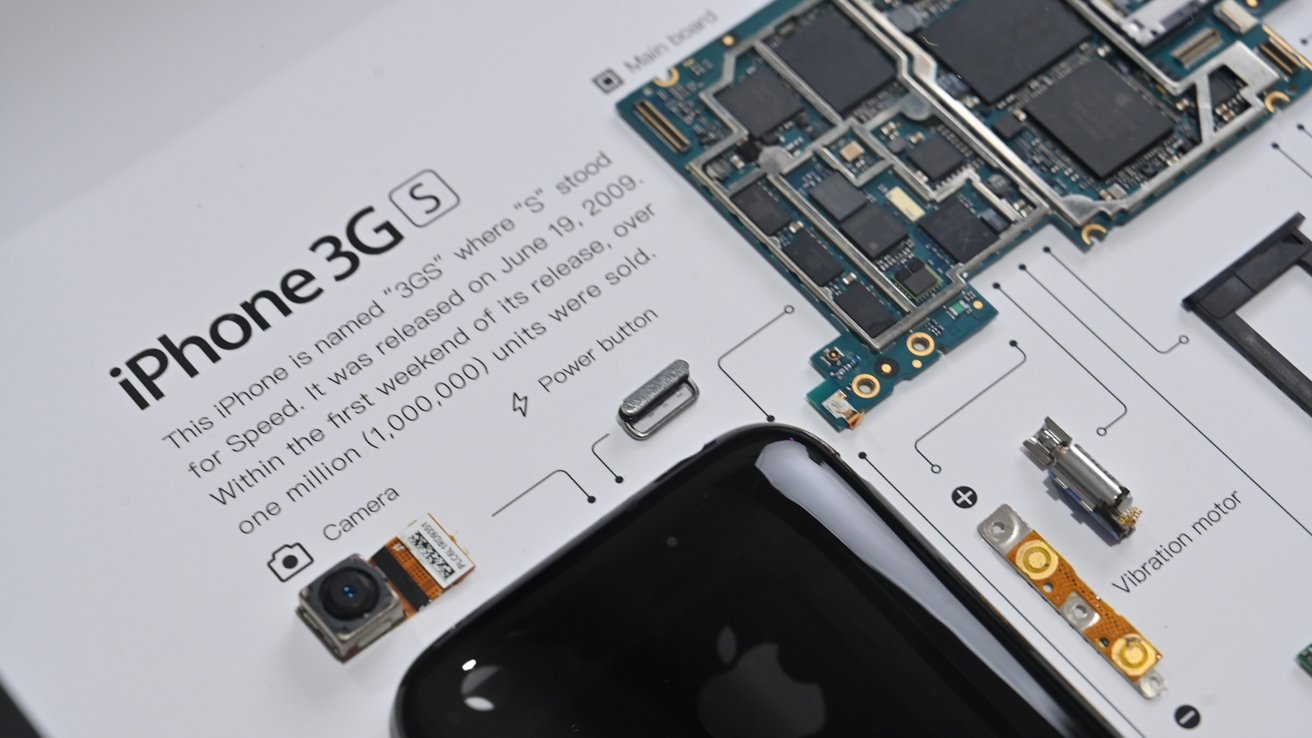 You can also see the improved 3MP camera that could shoot video for the first time, as well as the continued use of the 30-pin connector.

Our last framed piece is of the iPhone 4S. This time, the S stood for Siri as it was the first device to include Apple's virtual assistant. It was announced on Apple's campus in 2011, only a day before the passive of Steve Jobs. 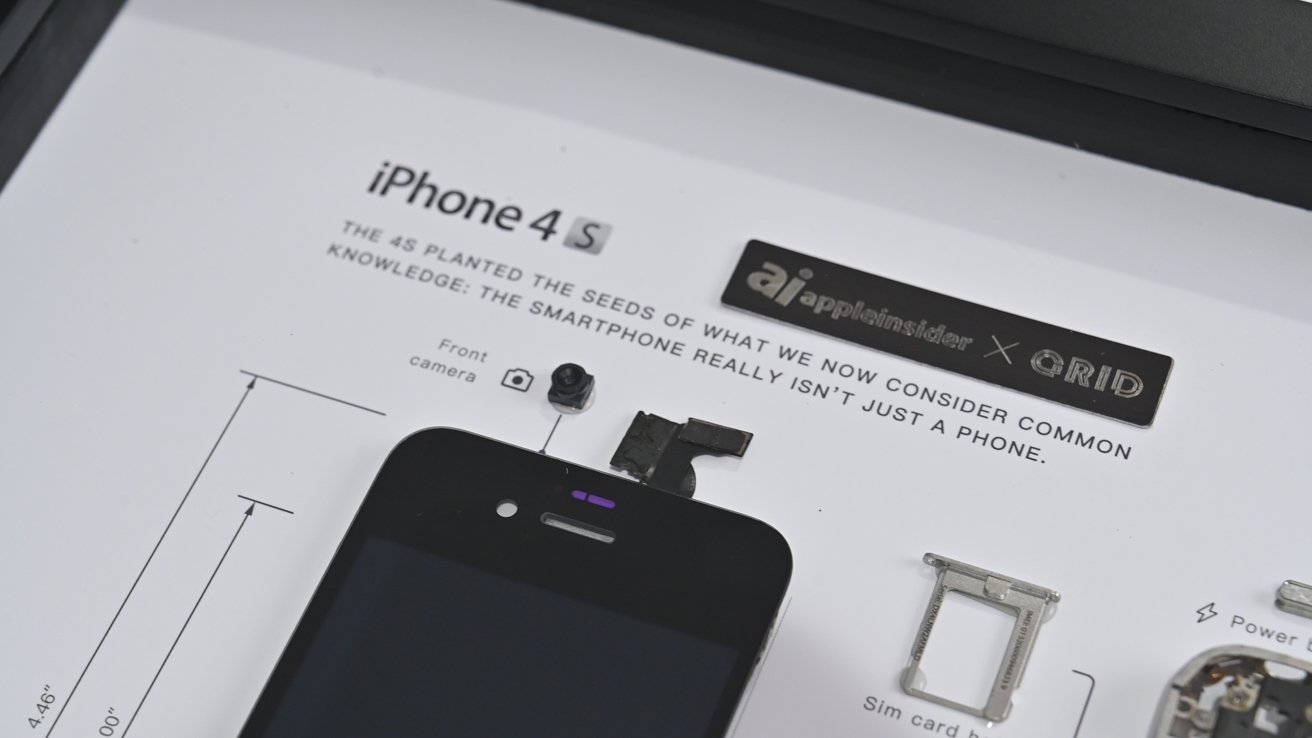 It was powered by Apple's A5 chip which can be clearly seen on the board. It's stamped, to make its provenance abundantly clear. 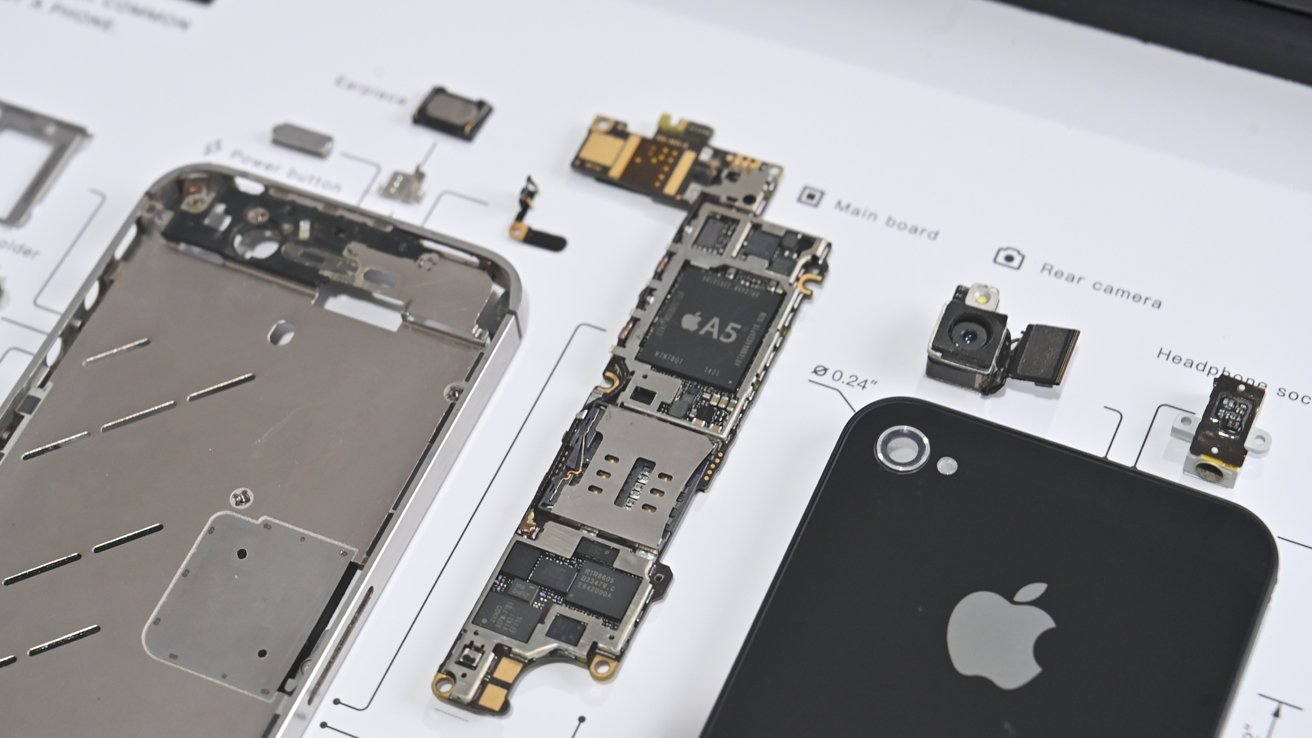 Apple's iPhone 4 and iPhone 4S design is similar to what Apple is using today on the iPhone 13 with flat sides and glass on the front and back. It still had the Home button and 30-pin though that wouldn't disappear for a bit longer.

This iPhone has an 8MP camera that looks notably more complex than the one seen in the iPhone 3GS version. 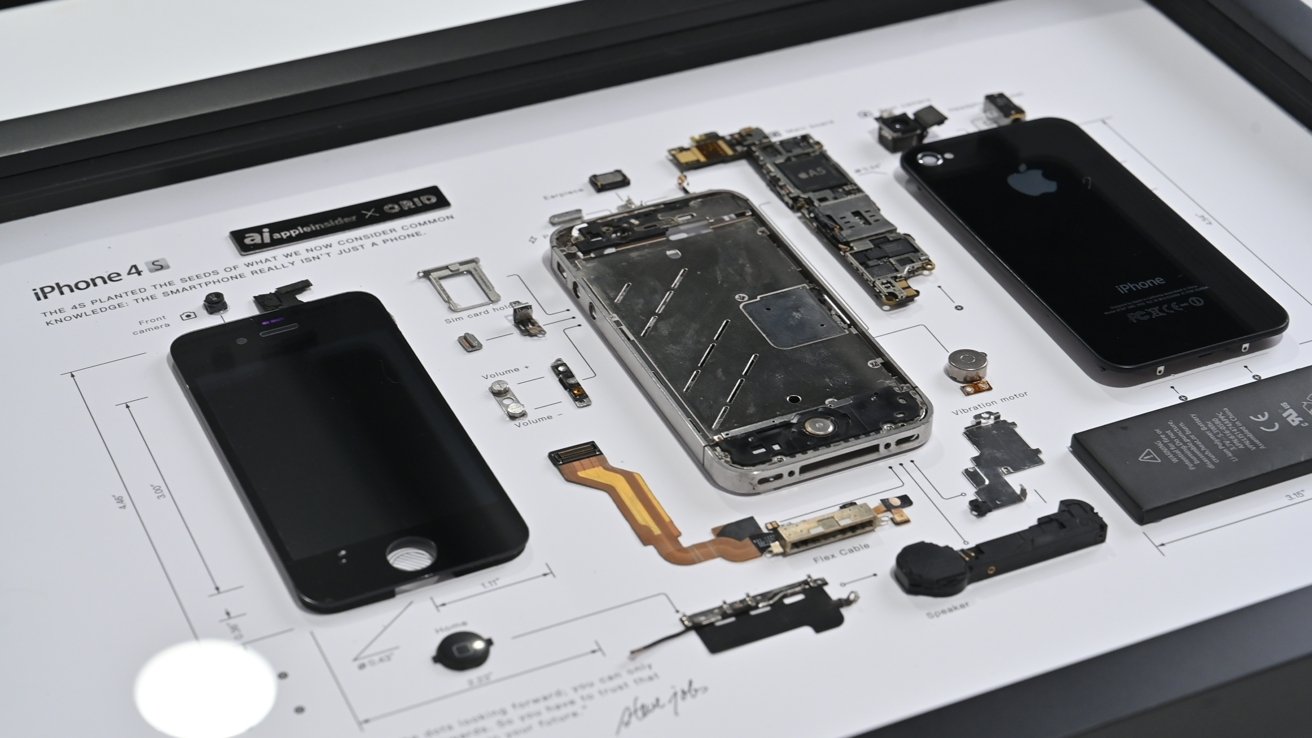 Should you buy a Grid Studio frame?

It is easy to recommend any of the Grid frames to any collector or Apple fan. They have a wide variety of models from over the years, up to the iPhone X.

There is so much detail in the work with each piece hand-placed. We love how much effort has gone into not just arranging the pieces, but the printing.

The frames themselves don't feel like the highest quality and they do use plexiglass instead of actual glass but it wouldn't be hard to slide this into a different frame should you so choose. This is the only negative we have for the pieces of art.

Just be careful, because once you pick up one, you're likely going to want to pick up another.