AppleInsider
Posted: May 23, 2022 10:51AM
in Future Apple Hardware edited May 23
Apple is working on a "Network Adapter," FCC filings reveal, a mysterious add-on that has unusual properties, including a built-in battery and that it probably runs on iOS. 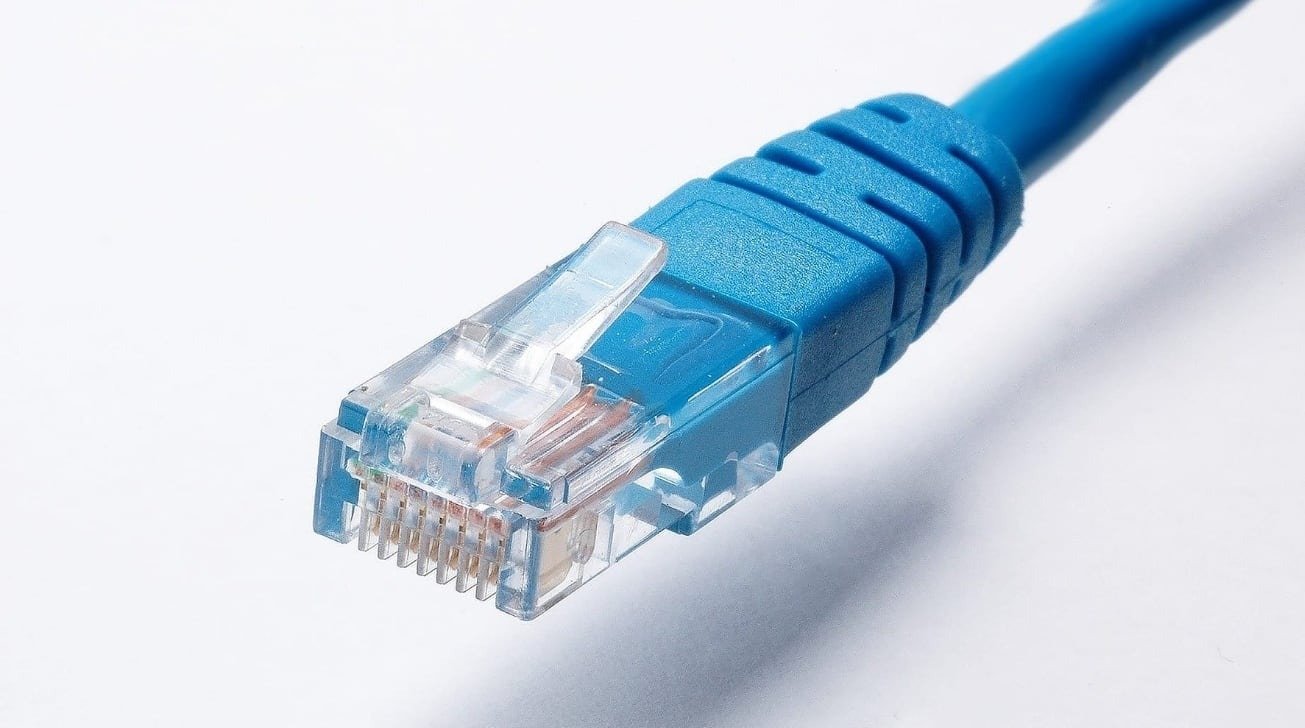 Filings with the FCC that were published on May 19 describe an unusual device that Apple is testing. Put through tests for Wi-Fi, NFC, and Bluetooth, the unnamed hardware is named "A2657" and as a "Network Adapter."

While there are no images to see in the report that would hint at what the Network Adapter looks like, a description of the hardware's connectivity is included.

The description defines it as a "Network Adapter," but includes an integral battery, two Gigabit Ethernet ports, a USB-C connector, USB-A port, and an antenna. On the wireless side, it supports up to 802.11n Wi-Fi but notably not 802.11ac. It also has an unspecified Bluetooth radio and NFC. 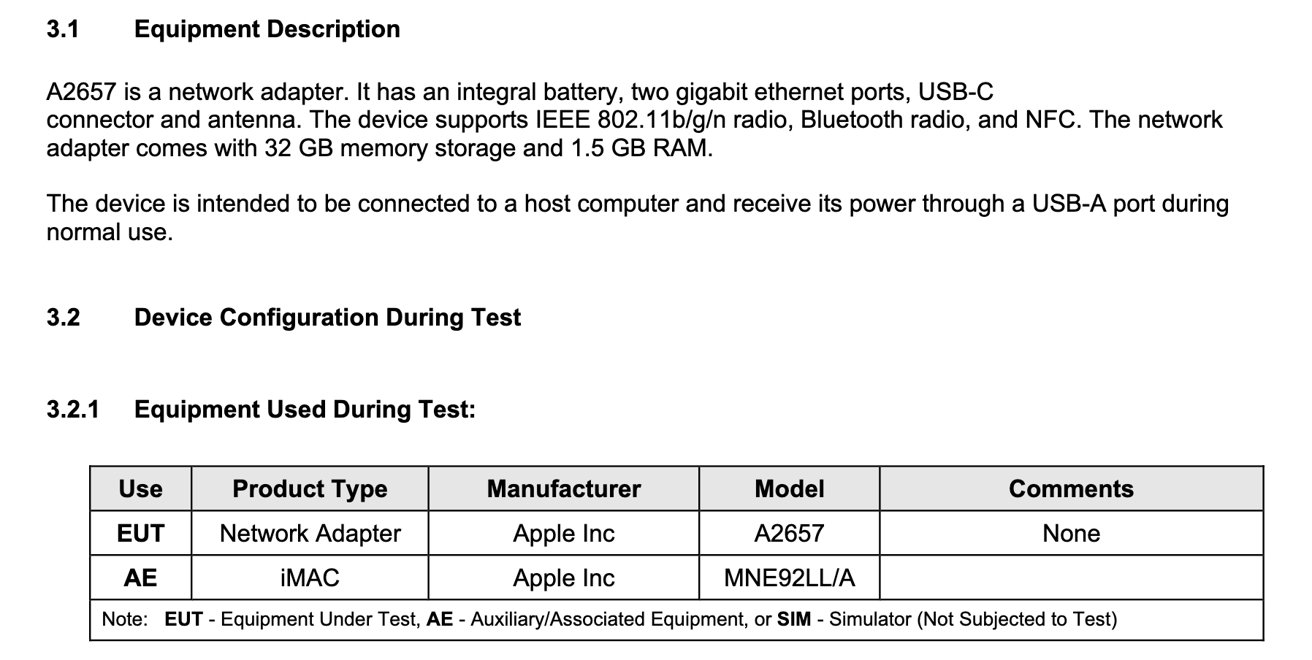 The description of the hardware in one FCC filing.

While it includes a battery, the device is described as needing to be "connected to a host computer and receive its power through a USB-A port during normal use." The test report added that the test required the use of an iMac.

Intriguingly, and first spotted by 9to5Mac, the hardware also has 32GB of storage and 1.5GB of memory. It also used firmware "19F49" which could be a version of iOS, borrowing a concept used by the Studio Display.

It is plausible that the device could be some form of connectivity add-on for a Mac, but the selection of connections seems odd, since Apple's Mac lineup usually has Wi-Fi and Bluetooth, though not NFC. The iMac used for testing may be an Intel model, or USB-A adapted from USB-C. However, if intended for a wide array of presently-shipping Apple devices, USB-C is more ubiquitous, and it's not clear why the power would be supplied from USB-A.

Apple has used external hardware to offer wired networking, such as the Ethernet port in the power brick of the 24-inch iMac, but certainly not with this amount of extra connectivity. 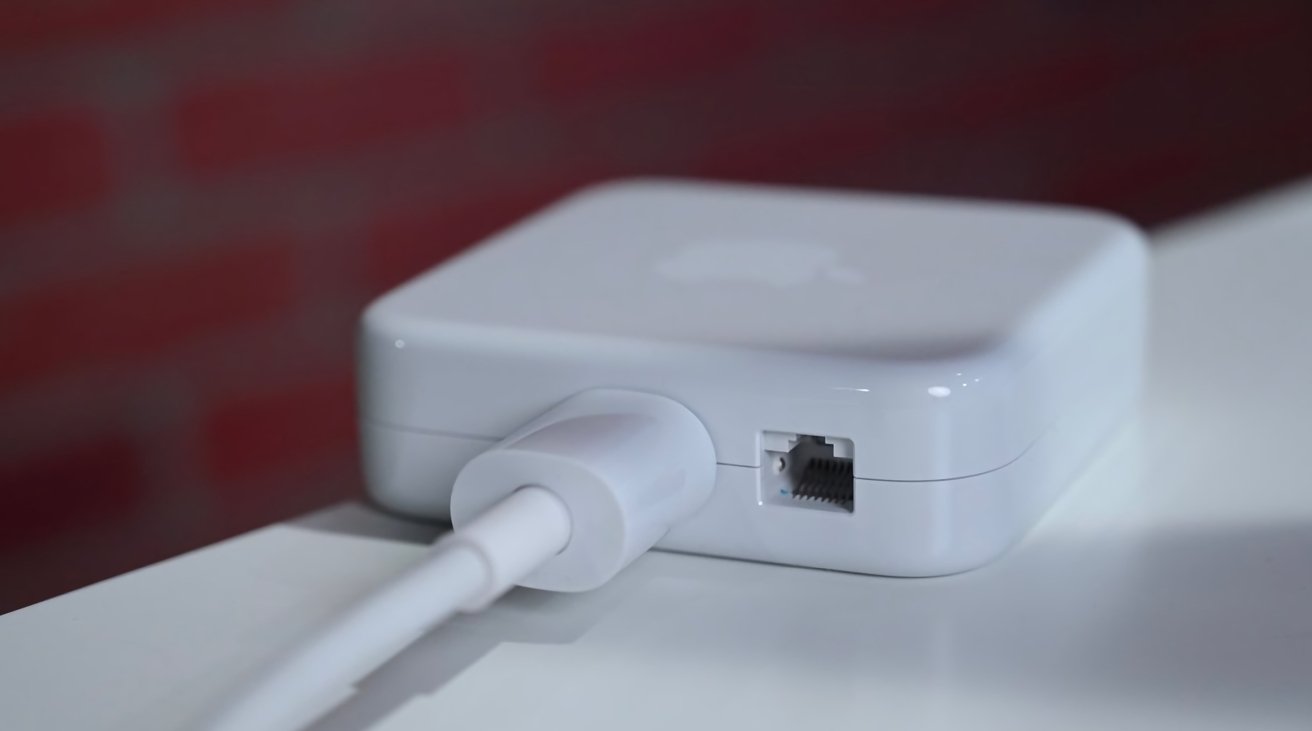 The power brick of the 24-inch iMac can include an Ethernet connection.

The selection of connections may mean the device is intended to provide those elements where the host doesn't offer them, or that it is intended for a highly specific situation. Rather than being a consumer-oriented device, this has more chance of being internally-used hardware, most likely for Apple's in-store service department, or retail displays.

While Apple does submit hardware for testing as per regulations, there is no guarantee that the device will ever enter production, or even be introduced to the public at all.