Hands on with the new Apple Watch faces in watchOS 9

AppleInsider
Posted: June 15, 2022 8:38PM
in Apple Watch edited June 2022
Even without third-party faces, watchOS 9 is still set to deliver some new face designs for Apple users. We're going hands-on with all of the new faces, as well as the newly-updated faces. 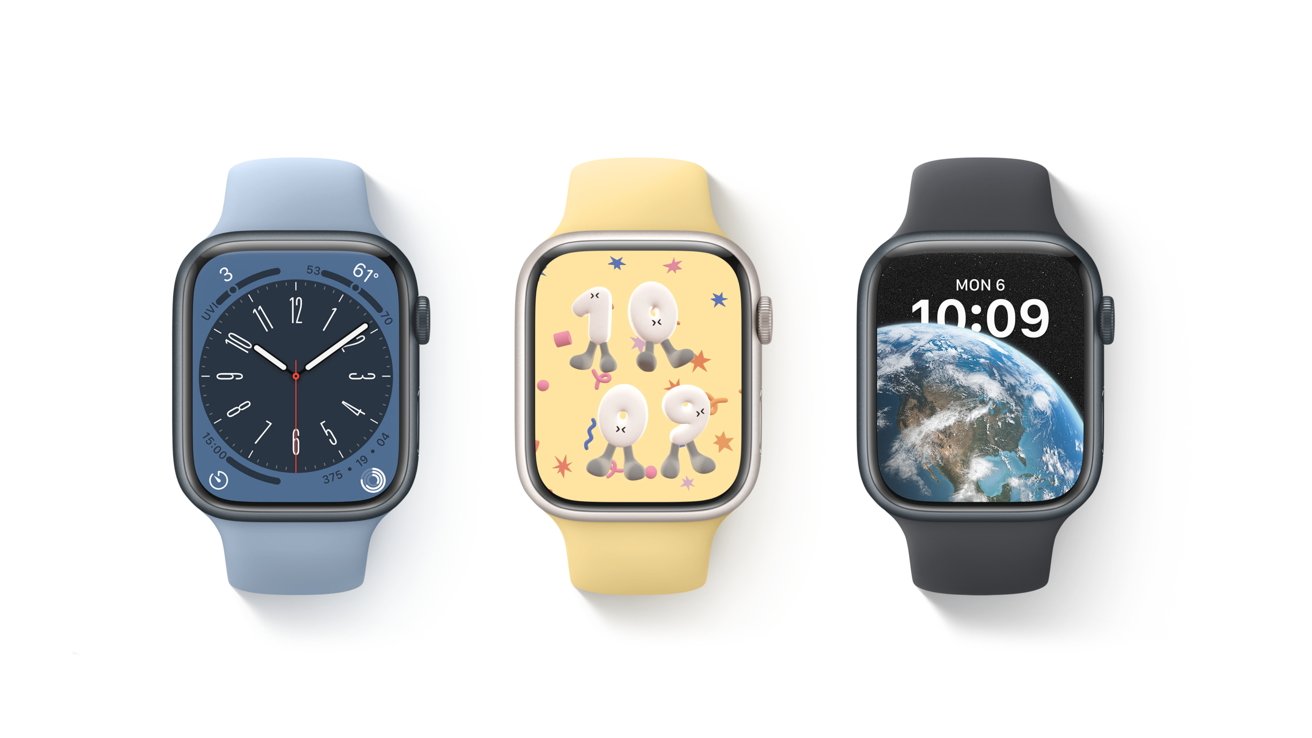 Some of the new faces in watchOS 9

We installed the initial developer beta of watchOS 9 on our Apple Watch to test the new faces for ourselves. It's been about a week and we love some of the improvements Apple has made. 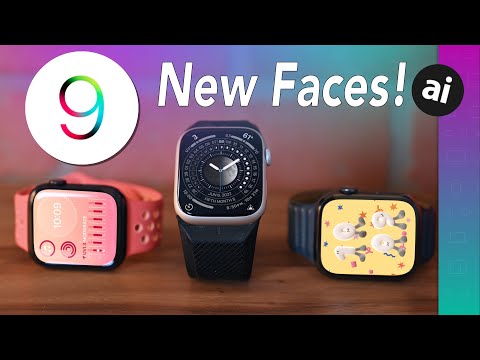 One of the most touted by Apple is its new Lunar watch face. This new face "depicts the relationship between the Gregorian calendar and lunar calendar." according to Apple. The moon is highlighted atop a field of subtle stars.

You're able to choose between the Chinese, Hebrew, or Islamic calendars. This will depict the calendar around the face in relation to the phase of the moon. As you rotate the Digital Crown, the dates will rotate around the moon as the light moves across its face. 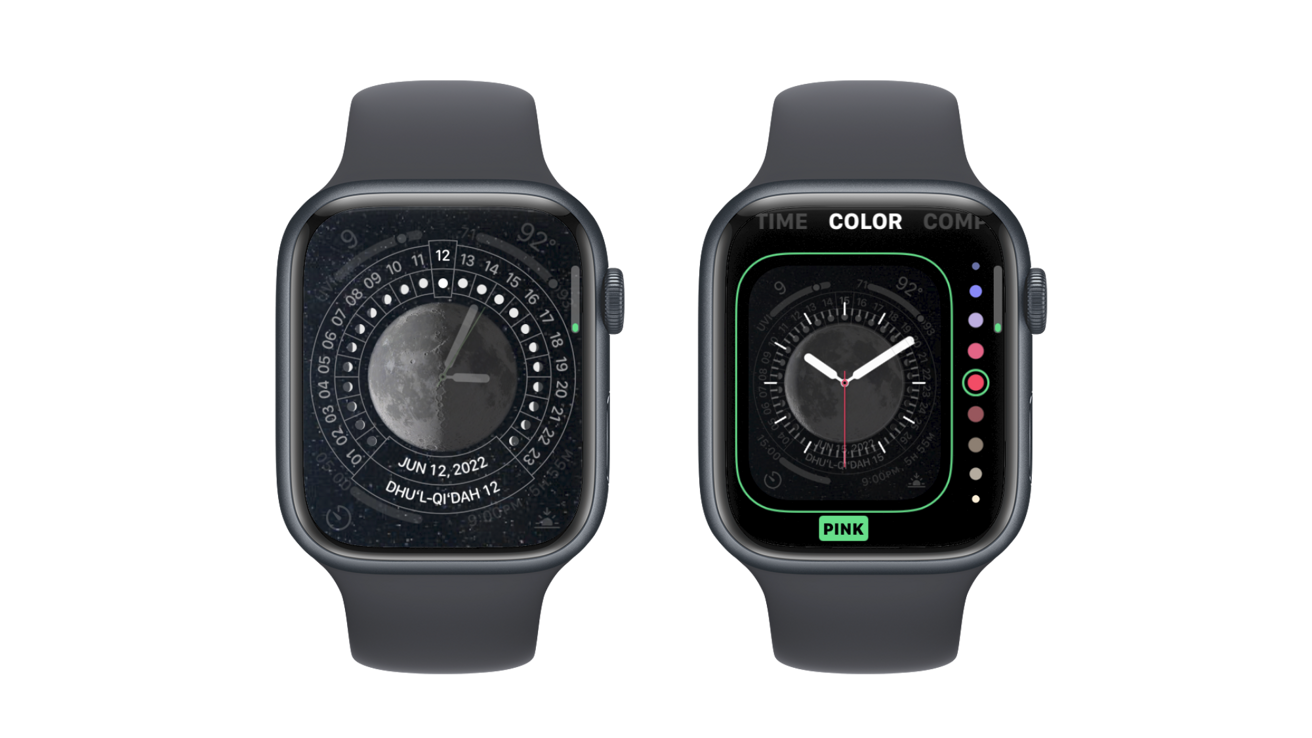 The Lunar face on Apple Watch with watchOS 9

This face supports four complications, one in each corner. The date is perpetually denoted at the bottom of the face so it does not need to occupy one of the dedicated complication slots.

Further customization includes color options for the second hand and the choice between analog and digital for the time-telling method in the center of the face.

For a more lighthearted face, there is the new Playtime choice. This is a collaboration between Apple and famed artist Joi Fulton.

This face features four characters hovering on-screen. Each character is shaped like one of the numerical digits in the current time. 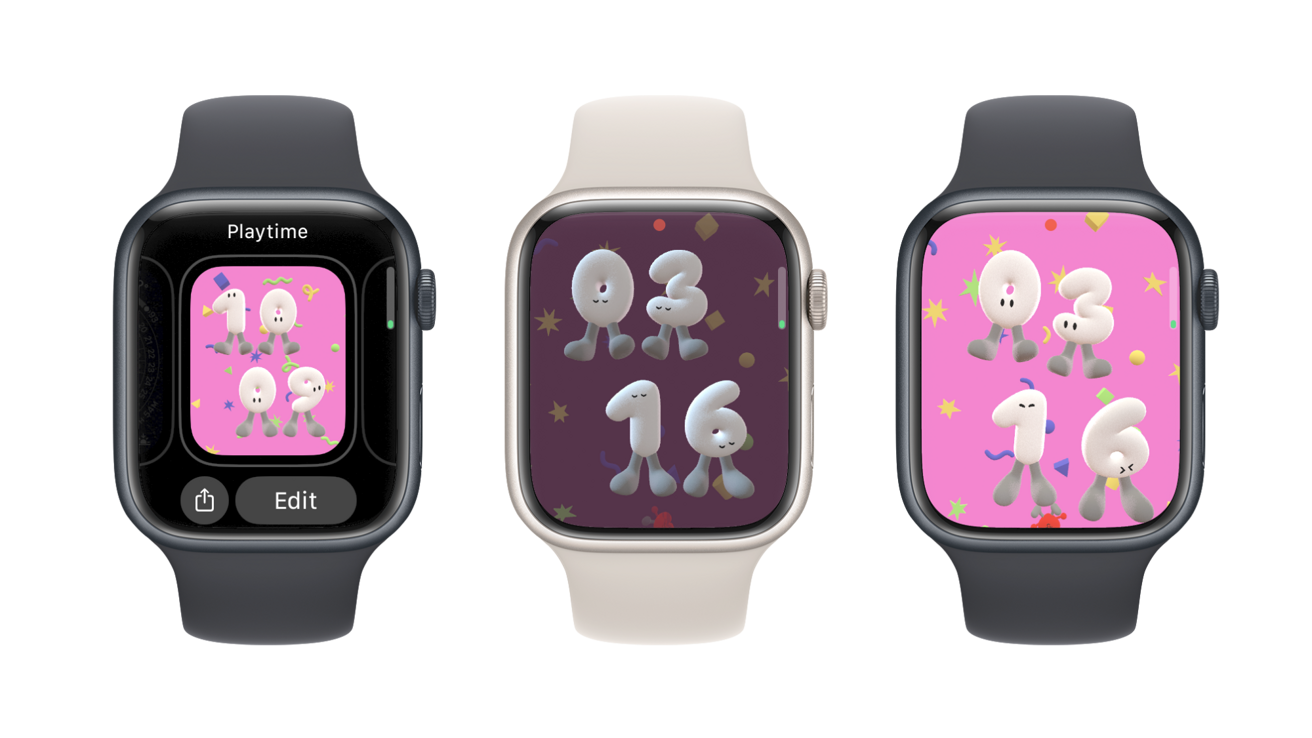 The Playtime face, including when dimmed (center) and when they bump into the glass (right)

The characters float, dangling little feet as they sway. When tapped, they react by bouncing back. As the characters come swinging back towards their original position, they "bump" into the glass of your Apple Watch, causing them to go cross-eyed for a moment.

If you have an Apple Watch with an always-on display, when it goes idle and dims the brightness, the characters fall asleep. The screen goes dark with just a bit of blue moonlight cast across the dozing characters with their eyes closed.

Customization for this face includes your choice of background colors and your on/off preference for the confetti hovering behind the characters. Unfortunately, no complications are supported.

Possibly our favorite of the new faces is Metropolitan. This face has been inspired by traditional timepieces and looks like a more typical watch face. 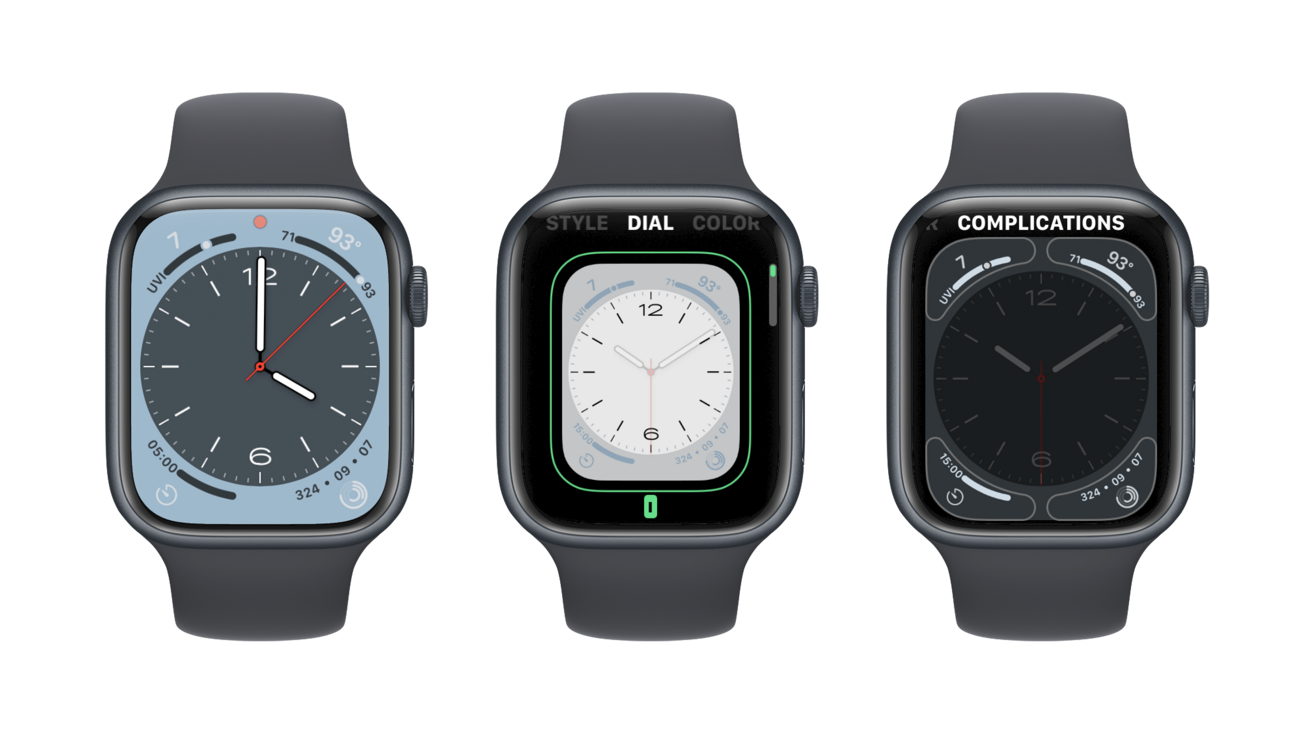 There's a circular face with tick marks at regular intervals. You can choose whether to have no numbers, some numbers, or all 12 hours displayed. The dial has four looks, combining a white center, dark center, light background, or dark background. You have your choice of colors as well.

When your watch awakes from sleep, the numbers animate in. During sleep mode, they are just lines, but the lines rotate to reveal the hour as it awakens.

Like others, it supports four complications, one in each corner. There's no option for a center complication.

Some faces Apple has tweaked, bringing improved graphics, more color choices, and other enhancements. For example, some faces now support rich complications for the first time which can display more information.

The biggest updates are coming to Astronomy, Portrait, Modular, Modular Compact, and X-Large.

This popular face has all-new visuals that are much more detailed than in years past. Both the Earth and the moon look incredible and more realistic. The dark side of the Earth for example has tiny little lights in the populated areas. 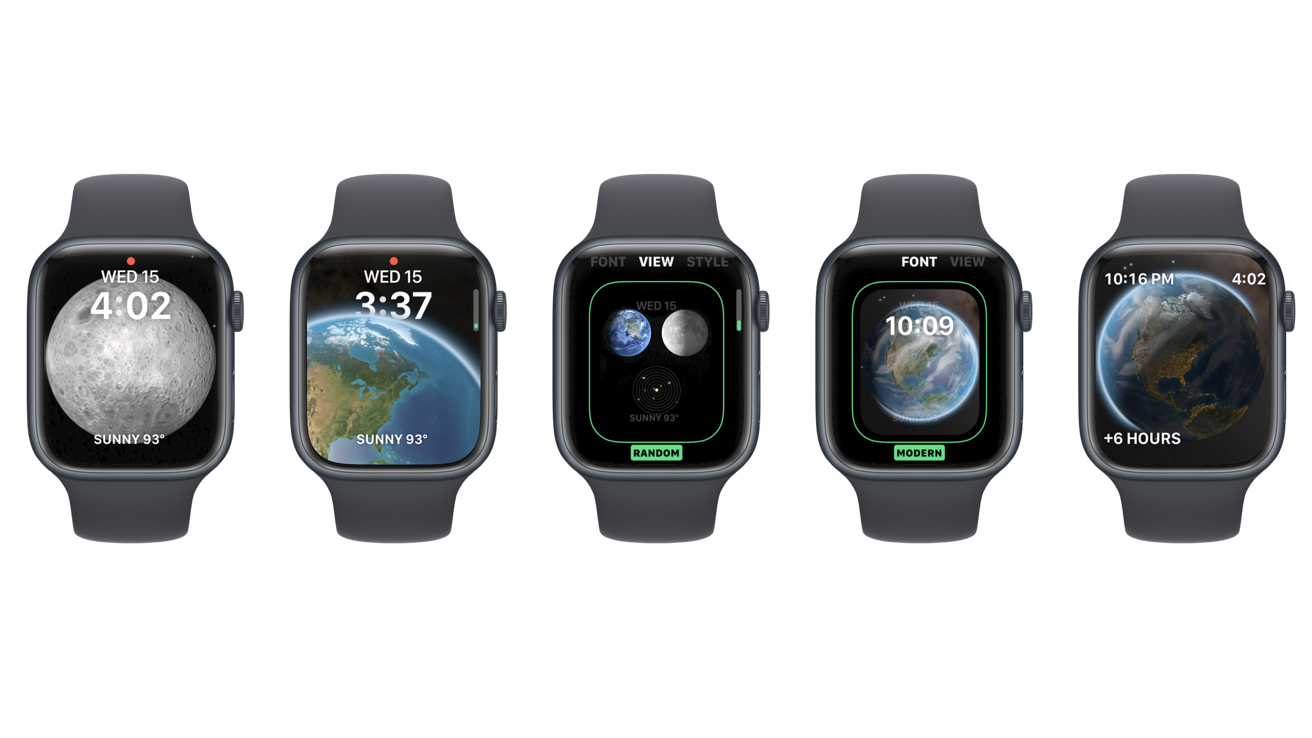 For the first time, you can choose the font for the time and you can opt for a random view between earth, moon, or the solar system.

Other features are still here such as the ability to spin the planet with your finger and see it over time by rotating the Digital Crown.

All three of these faces -- Modular, Modular Compact, and X-Large -- were updated with watchOS 9 to support background colors. You can choose from the huge array of colors Apple continues to add. 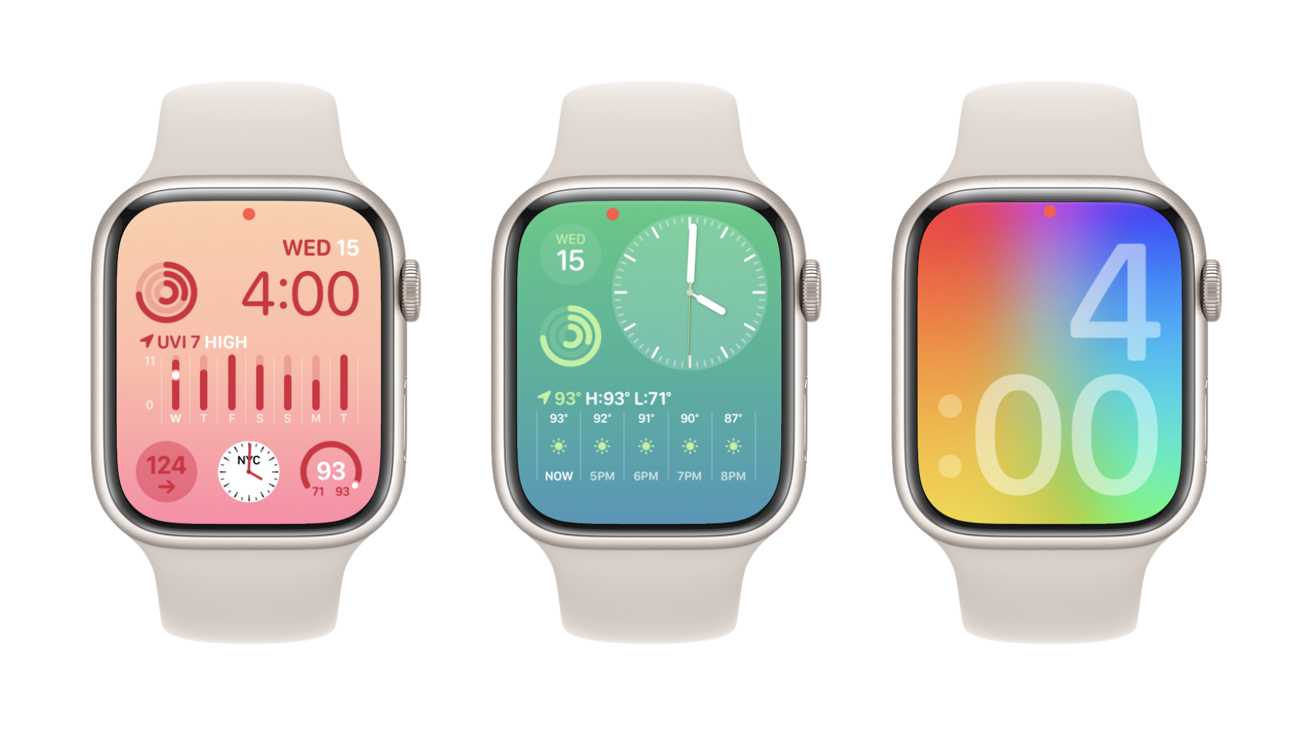 So now instead of just black, the background can be rainbow, solid-colored, or gradient. The gradients look especially good. Color choices are red, clover, Abyss Blue, orange, Starlight, green, and blue.

These colors will fade away when dimmed and will slightly tint the icons and widgets on the screen. 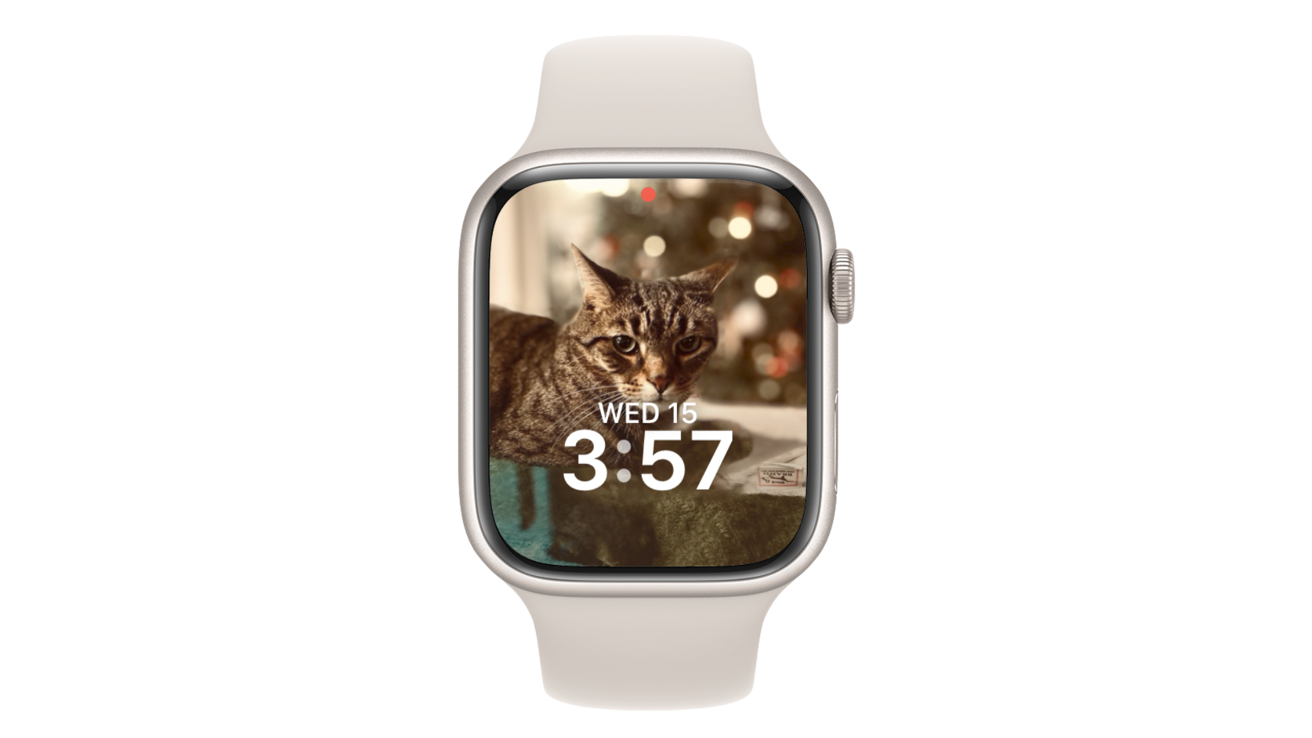 If you'd like, you can edit the photos to tint the background layers. This brings more focus to the subject and helps pull them from the background.

When you rotate the Digital Crown, your pet's face will increase in size over the background, enhancing the depth effect further.