AppleInsider
Posted: June 21, 2022 6:01PM
in General Discussion edited June 21
Apple's pair of dual-output USB-C are shipping, and are well-suited for many of your daily devices. 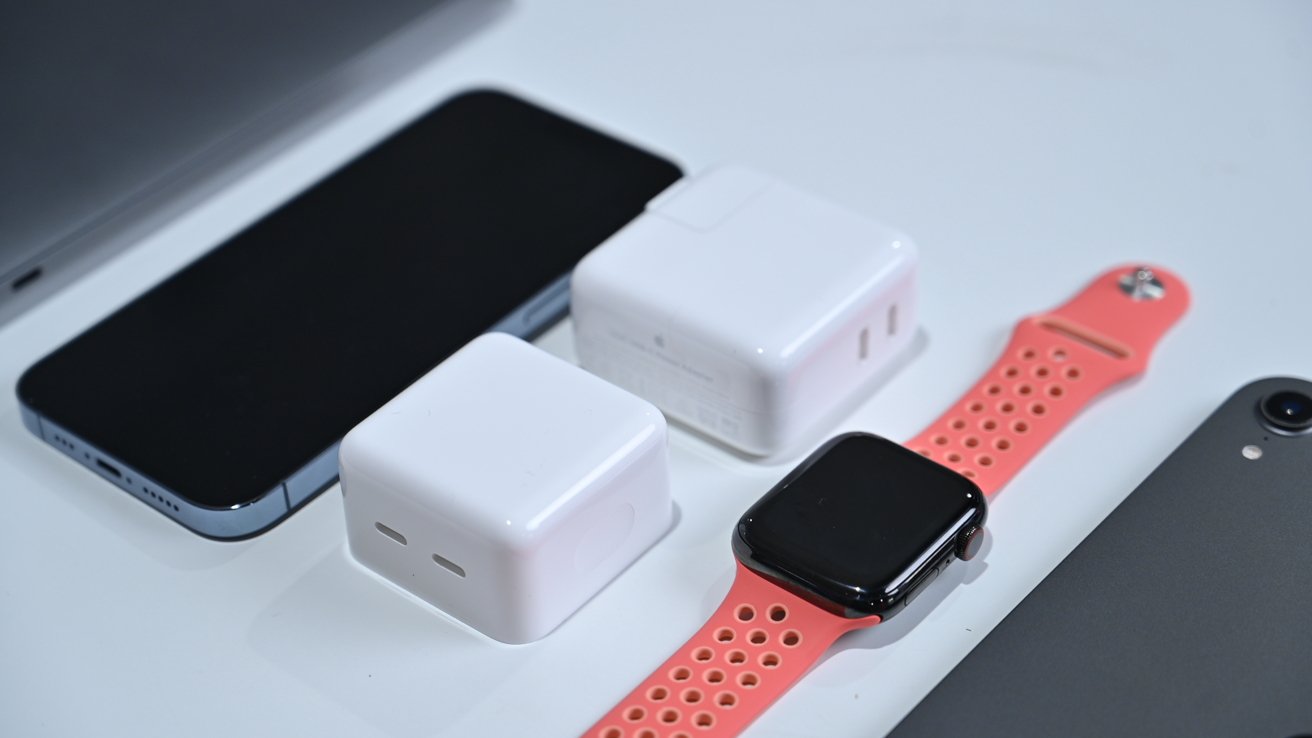 Surprisingly, Apple had a few hardware announcements up its sleeve at WWDC this year. Most attention fell on the M2 MacBook Pro and the redesigned MacBook Air, but it also released a pair of new USB-C chargers.

Each of these chargers has two USB-C outputs to charge a pair of devices simultaneously at a maximum of 35W. Despite the slightly different design, both chargers support the same amount of power.

Regardless of which version you pick up, you are getting a 35W charger. If you plug in a single device, it will receive the full 35W of power, assuming it is able to accept it. This will be larger devices such as a MacBook Air. 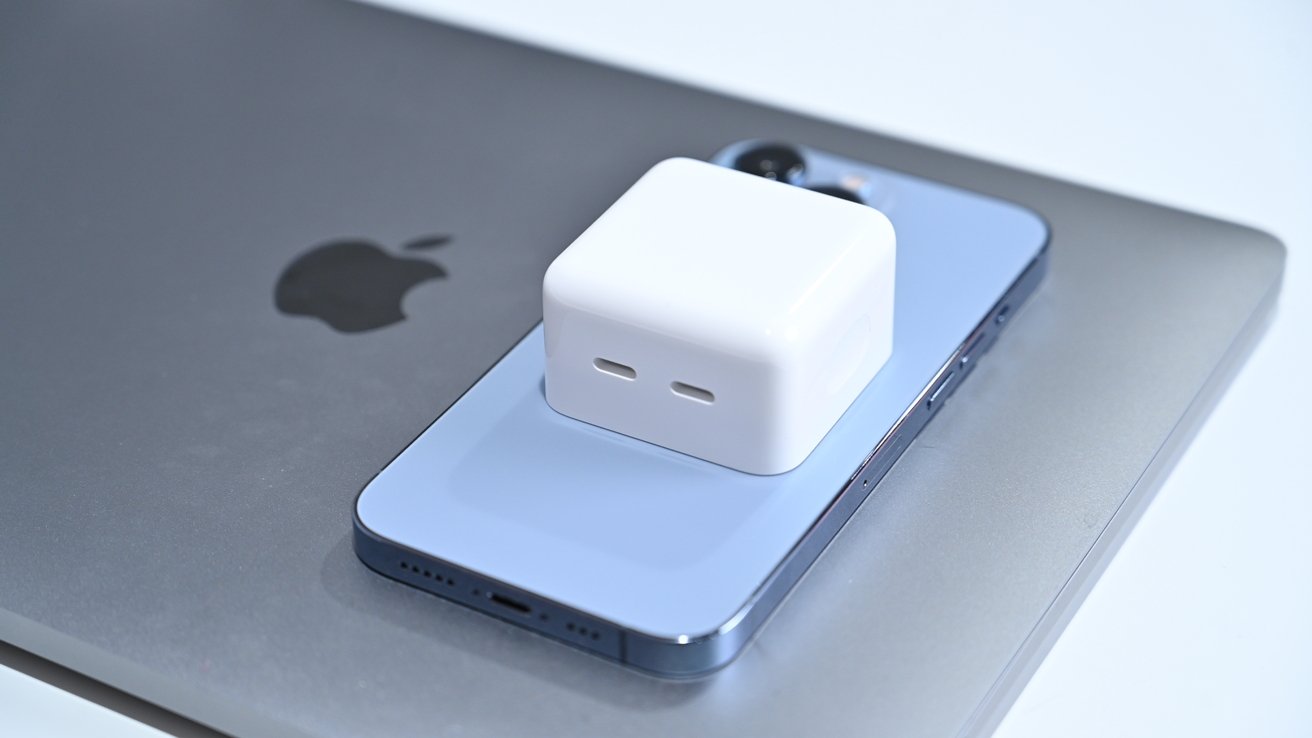 When you have two devices connected at once, their power draw will depend on what the devices are. If you are connecting to higher-wattage devices, both will get up to 17.5W equally. 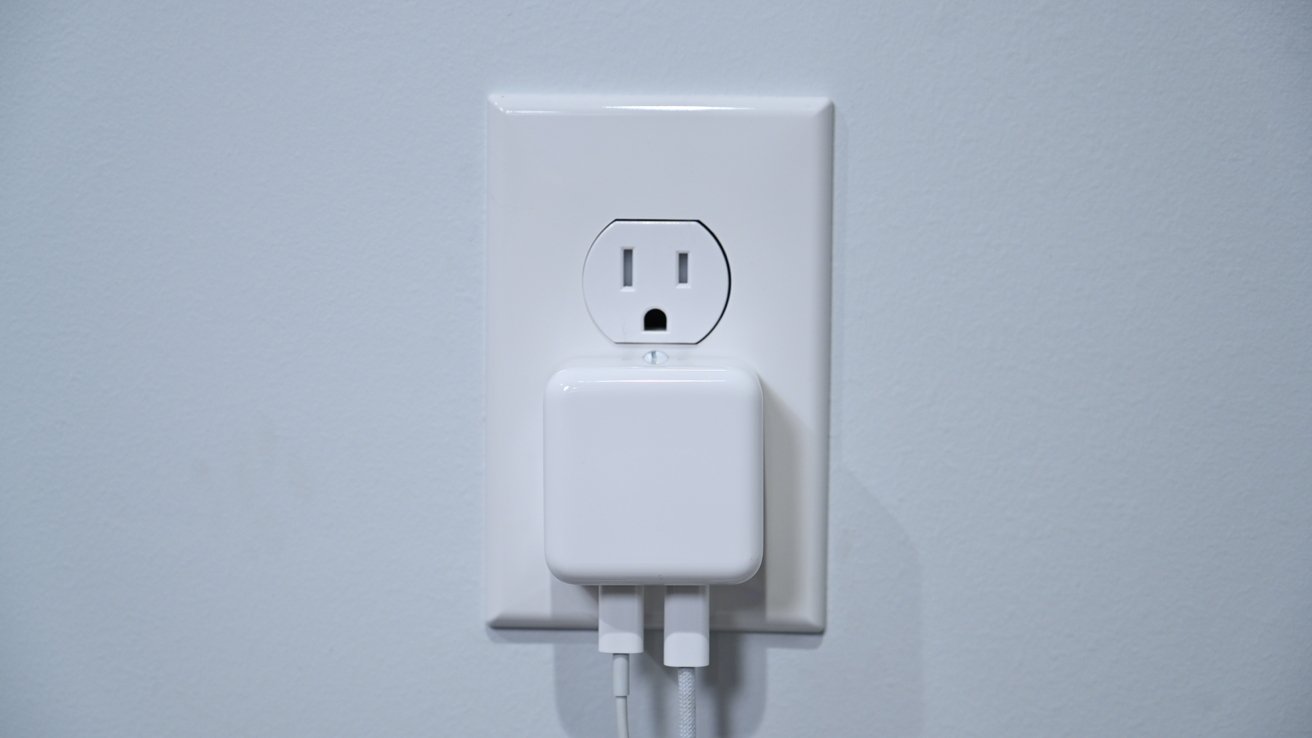 The compact USB-C charger in wall

This includes connecting a portable Mac alongside an iPhone or iPad or both an iPhone and iPad together. Any combination of those and they'll max out at 17.5W apiece.

When you connect a device with a lower power draw, then the equation changes. AirPods or Apple Watch will draw up to 7.5W while your Mac, iPhone, or iPad will draw up to 27.5W -- device depending.

The global version of the dual-output charger is slightly larger but is available worldwide. It is the one that looks most familiar to Apple's standard line of high-output chargers.

It's slightly larger than Apple's 20W USB-C brick but has two USB-C ports instead. There's no Apple logo on either side but it retains the ubiquitous all-white appearance Apple is known for. 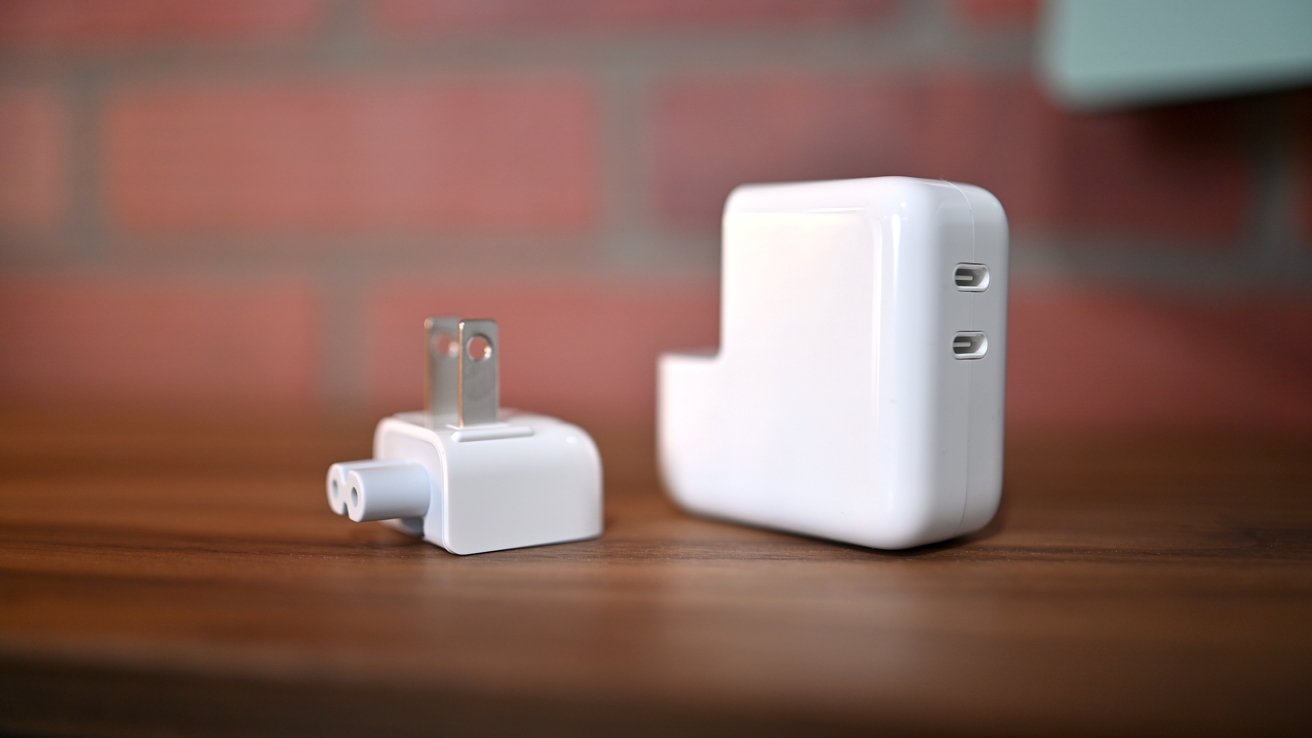 What makes it unique for global availability is its duckhead design. This style charger allows the plug piece to be removed, which can look like the head of a duck with the plugs open.

With the plug removed, you're able to swap it for international plug heads or extension cables.

Apple limits the availability of the compact version of the charger to countries that support the common Type A plug because it isn't interchangeable. Only those in the United States, Canada, Mexico, China, Japan, and select other countries are able to purchase Apple's compact dual USB-C charger. 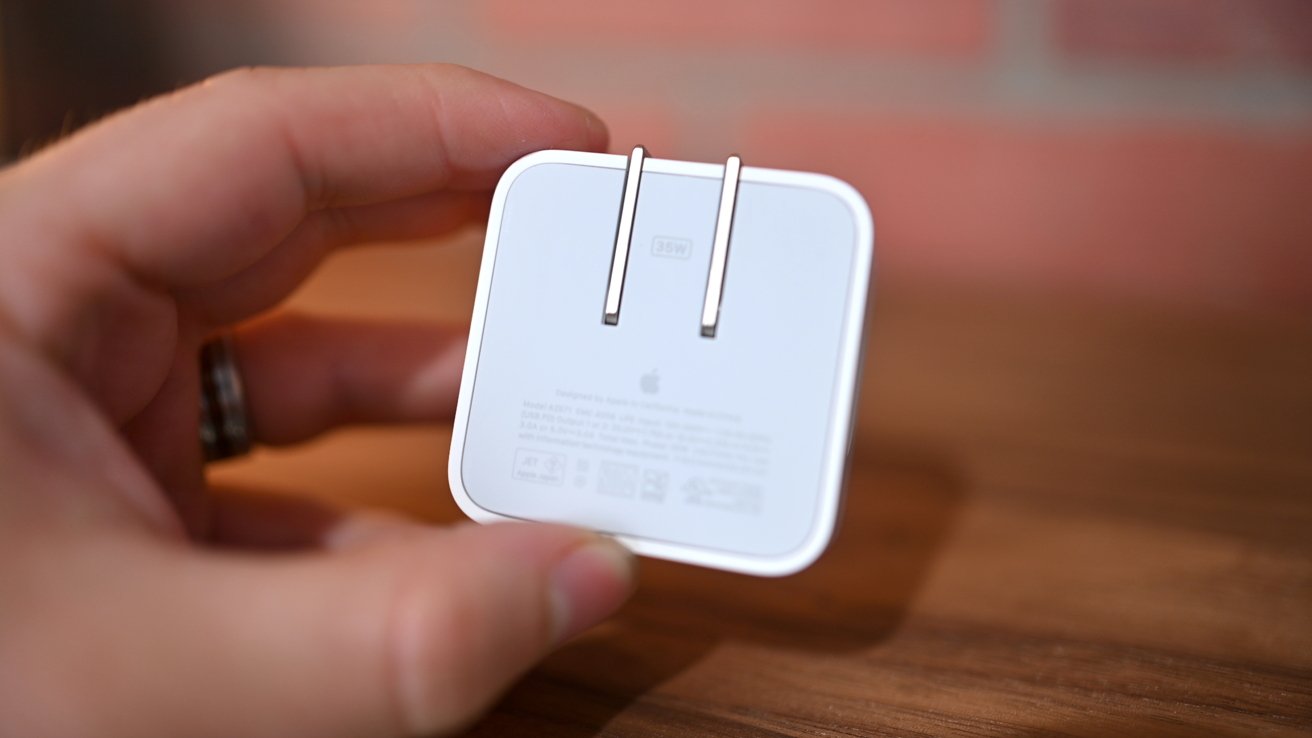 Wall side of the compact USB-C charger

Without the duckhead design, it's very similar in size to Apple's 20W charger but with an all-new design. This compact charger has a perfectly-flat grey back that sits against the wall. 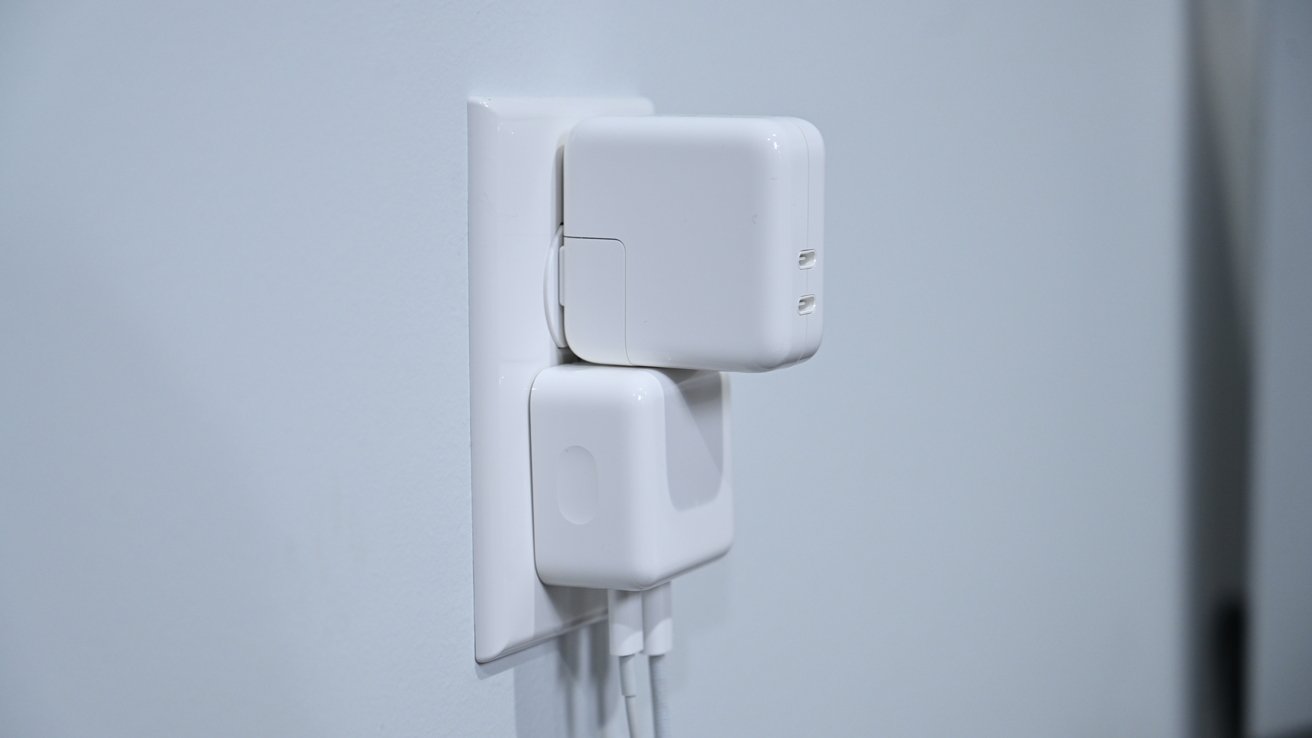 It's much more squat, sitting close to the wall versus protruding from it. On the two sides of the charger are small dimples which make it easier to pull the device from the wall.

Which version of Apple's dual USB-C charger is best will most certainly depend on your use case and location. For us, we were more partial to the compact model but the tried-and-true universal version will certainly have its fans. 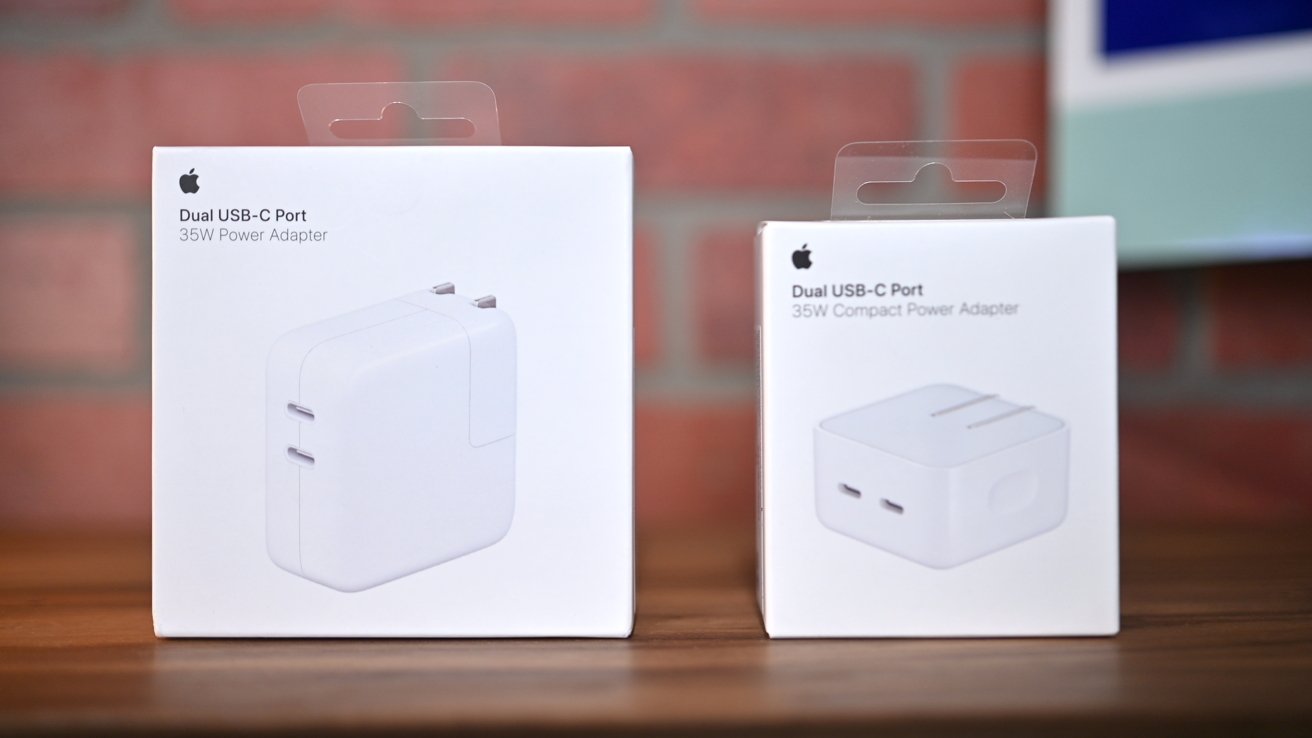 You're able to buy either of these chargers now for $59 each but they'll also be bundled with specific versions of Apple's new MacBook Air. That said, there's also a wealth of third-party multi-port GaN chargers that are more affordable or outfitted with more ports, and we'll be talking about them soon.