AppleInsider
Posted: October 10, 2022 3:38PM
in iPhone
Google has updated its Pixel line for fall 2022, with the Pixel 7 and Pixel 7 Pro sporting 50-megapixel cameras on the rear and improved performance. Here's how they compare against the similarly-priced iPhone 14 and iPhone 14 Plus. 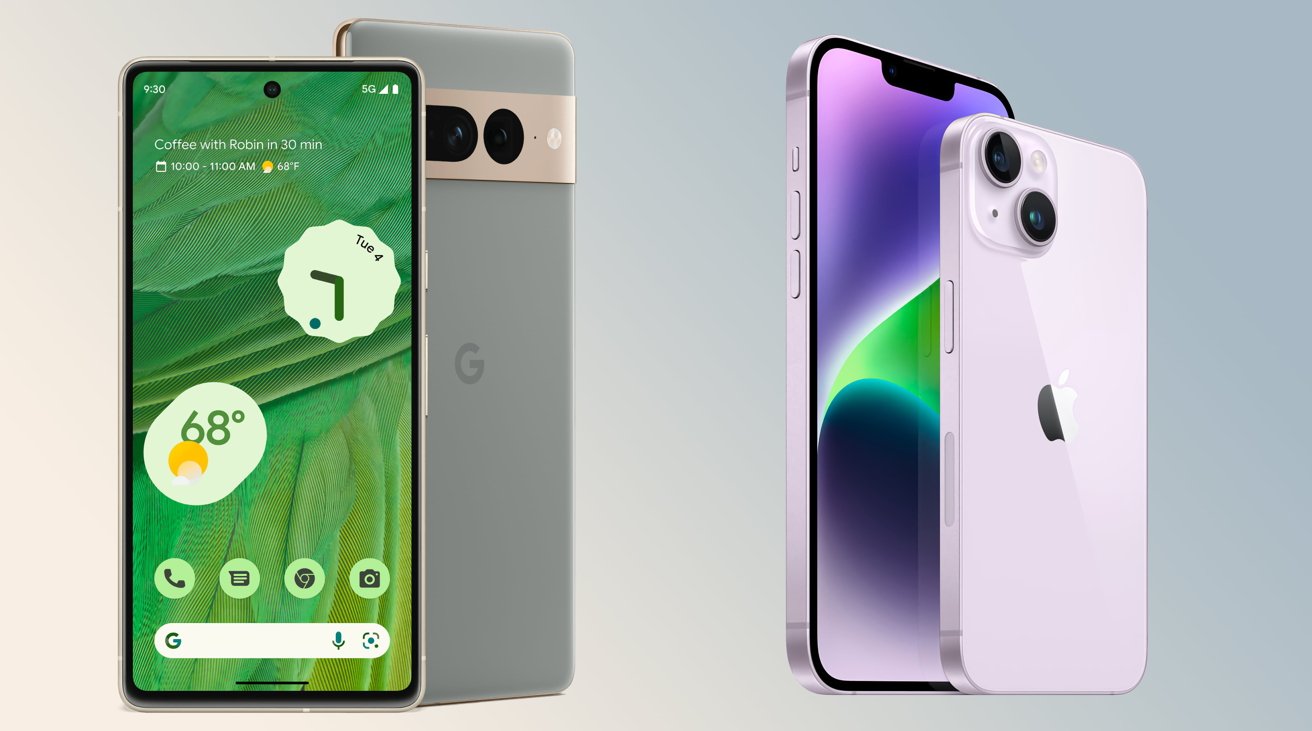 One of the serious contenders to the iPhone's smartphone throne, Google's Pixel 7 collection launched on October 6. Google offers a device that benefits from a new version of the company's Tensor chip, as well as more photography improvements over its predecessor.

But at the same time, Google seemingly hasnt gone massively out of its way to overhaul its flagship smartphones. Something Apple has been accused of for its non-Pro iPhone 14 models.

With pricing in the same ballpark, the iPhone 14 is the best candidate to compare with against Google's latest update.

Here is the breakdown between the rival devices.

Google is sticking to the same design motif it used for the Pixel 6 range, consisting of a large display on the front and a horizontal camera hump on the back. Instead of a square bump as Apple uses, the Pixels go for the bar.

The Pixel opts for a zirconia-blasted aluminum frame made from 100% recycled materials, while the Pro has a polished aluminum version. This is most visible on that camera bump.

Google has claimed the new models are more compact than the Pixel 6 generation, but still function as large-screened devices. 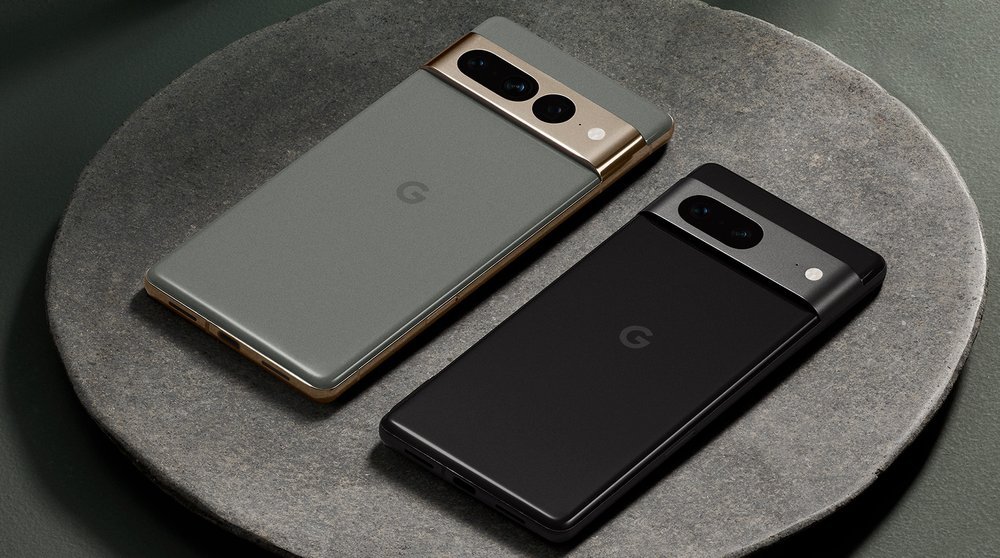 Both Pixels use aluminum, but treat their camera bars differently.

In both cases, the Apple smartphones are generally smaller than the Pixel equivalents, though admittedly the iPhone 14 does have a much smaller screen, which helps in this regard.

The iPhone 14 and 14 Plus have 6.1-inch and 6.7-inch displays, respectively, consisting of Super Retina XDR OLED panels. The Pixel 7 has a 6.3-inch OLED screen, while the 6.7-inch Pixel 7 Pro has a LTPO OLED display.

In all cases, the screens have high contrast ratios, with Google opting for a "greater than" 1 million:1 contrast ratio while Apple claims 2 million:1. All are also capable of displaying HDR content, but thats where the two start to majorly differ. 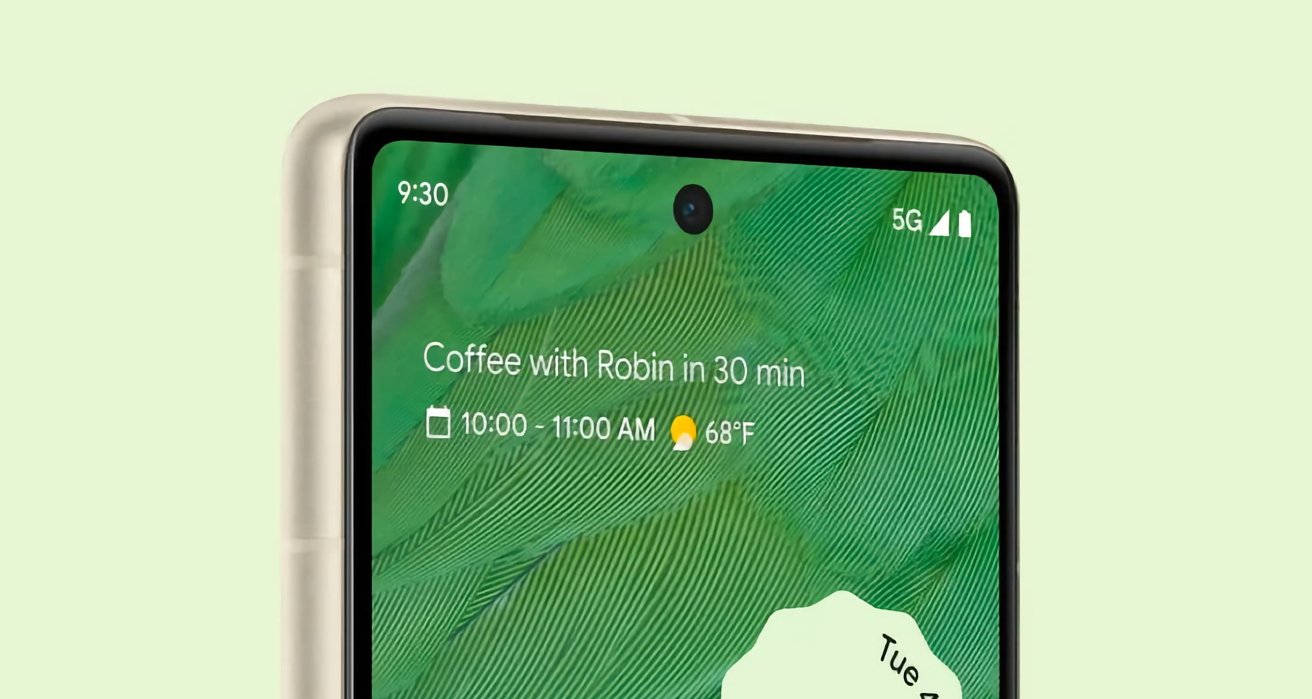 There's a hole punch camera interrupting the display, but at least it's smaller than an iPhone notch.

Both the Pixel screens are always-on displays, a feature that only Apple's Pro iPhone models offer. They're also able to adapt their refresh rates up to 90Hz and 120Hz, while the iPhone 14 and Plus stick to 60Hz.

There's also a variation in how the displays leave space for cameras. The iPhone 14 pair continue to use the notch, while Google uses a hole-punch camera.

For 2022, Apple didn't make a major change to its non-Pro iPhone camera setup, You're still looking at two 12-megapixel sensors covering Wide and Ultra Wide ranges, though Apple did increase the pixel size to 1.9 microns, which improves low light performance by 49%.

The computational photography changes introduced the "Photonic Engine," a rejig of the processing of images to bring Deep Fusion earlier. You also get the usual features like Sensor Shift OIS, Night Mode, Portrait Mode with Portrait Lighting, and Photographic Styles.

You could say the same about Google making relatively few camera changes, but the search company starts from a better vantage point. 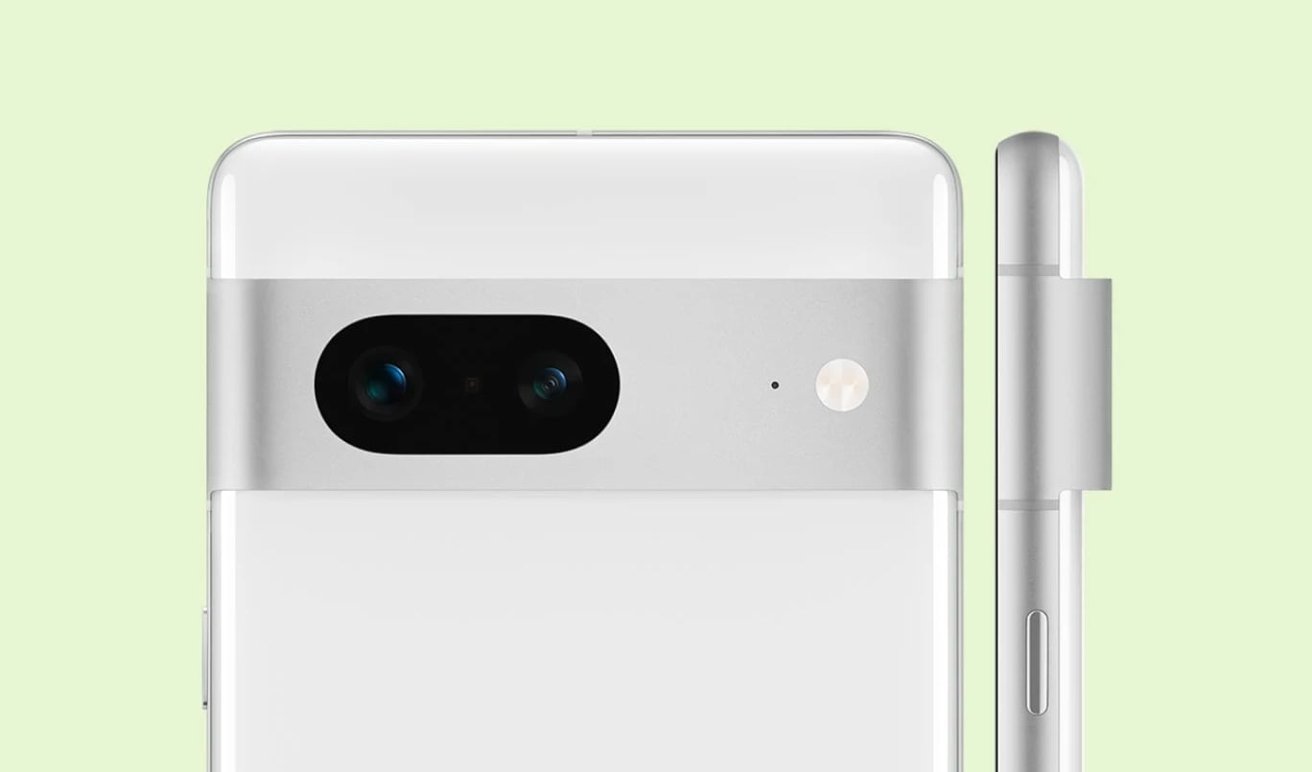 The 50MP Octa PD Quad Beyer wide camera on both Pixel 7 and Pro is a much higher resolution than the iPhone's 12, with it performing a similar trick as the larger iPhone 14 Pro sensor in using blocks of pixels to improve low light performance.

That also benefits from an LDAF (laser detect auto focus) sensor, which helps with focusing in a similar way to the iPhone 14 Pro's LiDAR.

Both Pixels also use a 12-megapixel Ultra Wide camera, with the Pro also having a 48MP Quad Bayer PD telephoto shooter with a 30x Super Res Zoom function. You can manage an 8x zoom on the Pixel 7, with the iPhones managing a 5x digital zoom in.

There's also the 2x zoom trick that the iPhone 14 Pro has in both Pixel models, performed by cropping the high-res image. The Pixel 7 Pro also adds in Macro using the Ultra Wide camera, matching a feature used in previous iPhone Pro models.

Google's computational photography smarts also come into play, providing unique features like Photo Unblur, Magic Eraser, and Night Sight, with the latter new needing half the exposure time than in previous models. Real Tone was trained on more than 10,000 portraits of people of color, to help improve the rendering of skin tones, including under low-light conditions.

For video, all are capable of 4K video at 60fps, along with HDR capture, a 240fps Slo-mo, and various image stabilization systems.

At the front, Apple uses its 12-megapixel TrueDepth camera array to offer 4K video with multi-level autofocus for group selfies, and depth mapping applications, as well as most of the features of the rear cameras.

Google opts for a 10.8-megapixel front camera, but curiously it has a fixed focus. It does benefit from Guided Frame, a feature for the blind and visually impaired that audibly assists getting their face lined up for a selfie.

Both Google and Apple design their own chips, and have different experiences to draw from. Both tout their respective performance benefits, and will basically provide their users with a fast and responsive user interface.

While Apple is using the A15 Bionic from the iPhone 13 Pro in its iPhone 14, Google goes for the Tensor G2.

The second-generation chip improves over the first by mixing up its eight cores to include two ARM Cortex X1 performance cores, two A78 cores, and four small A55 cores. While the A78 cores are really the only structural difference over the G1, there are also core speed increases.

There's also an improvement to the GPU in using the Mali G710. By contrast, Apple effectively only added an extra GPU core to bring its total up to five.

Google also includes the Titan M2 security chip, but again, this is something seen in the Pixel 6. 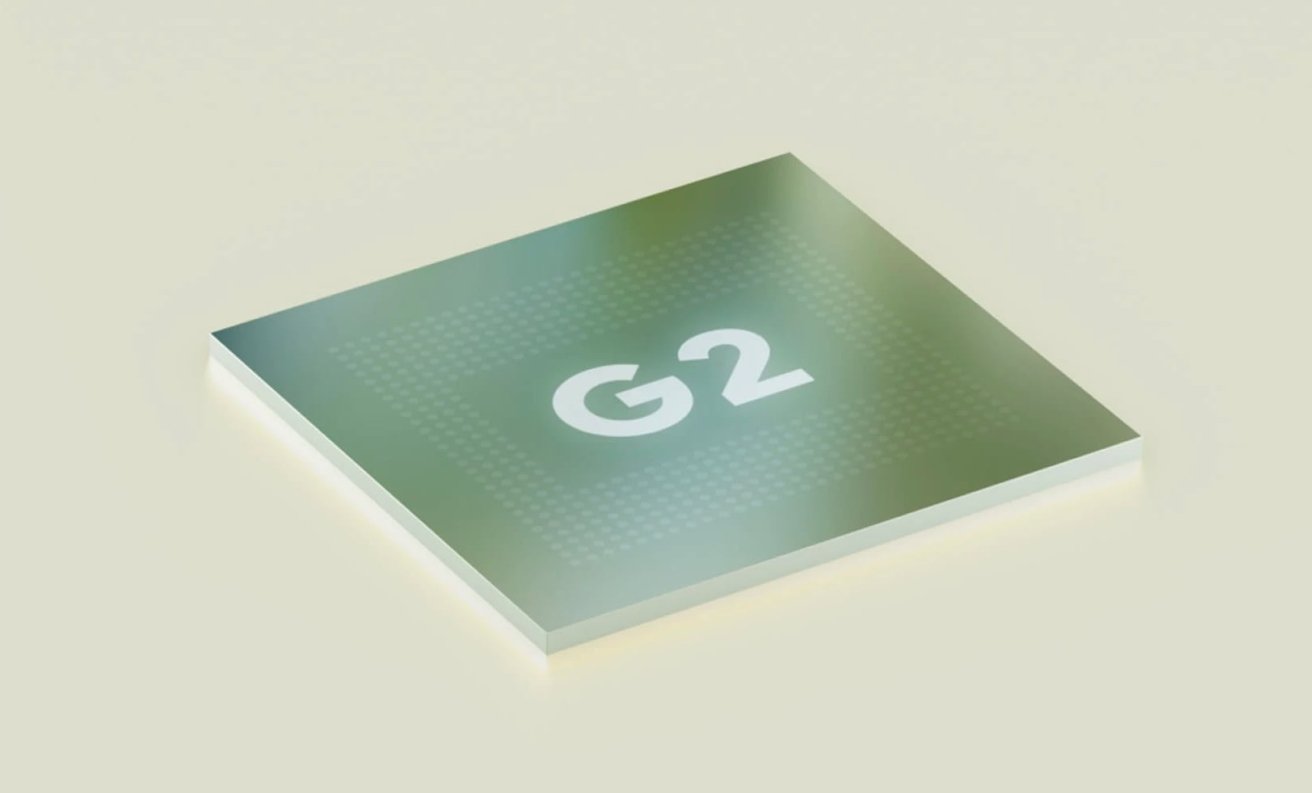 A Google artist's rendition of the Tensor G2 chip.

All of these changes results in a chip that Google uses to handle many of the computational photography improvements, as well as features like on-device processing of queries.

As for benchmark performance, we will have to wait until the Pixel 7 lineup is released before getting any real numbers, but pre-launch leaks suggest this could be an Apple win, still.

Pre-event benchmarks using Geekbench 5 seems to indicate the single-core performance of the Pixel 7 is 1,061, rising to 3,258 for multi-core. AppleInsider's benchmark of the iPhone 14 reported a single-core score of 1,733 and 4,641 for multi-core, utterly demolishing the leaked Pixel 7 version.

This doesn't bode well for Google, but it can still change for the better once more benchmarks are performed with production devices.

All of the smartphones boast 5G connectivity, but at different levels. Yes, you do get sub-6GHz across the board, but while both iPhones support mmWave, only select models of the Pixels will do so.

LTE continues to be available for all models, though again there is a difference when it comes to SIMs. All offer eSIM support, but while Google continues to allow for a physical SIM to be used, the iPhone 14 pair are dual eSIM only in the United States, though physical SIMs can be used for models in other countries.

Apple does metaphorically go off-road with its Emergency SOS via Satellite, which uses a combination of essential limited data transmissions and actual orbiting satellites to allow users to get help in signal dead spots.

In either case, you need to have supporting devices or networking infrastructure to really benefit from these.

The Pixel 7 Pro and both iPhones do support Ultra Wideband, which can help with range-finding in various ways, and could be used for future local inter-device communications.

NFC is offered through all devices, for both reading NFC tags and for payments.

Unfortunately, it is difficult to work out exactly which smartphone of the four has the best battery life until the Pixel 7 ships, and that's for a few good reasons.

First, Google does say the capacities of its batteries are 4,355mAh and 5,000mAh for the non-Pro and Pro respectively. Apple doesn't publish numbers, but post-release analysis put the figures at around 3,279mAh and 4,323mAh.

Then we have the problem of each side having their own efficiencies and techniques to cut down on battery usage. The capacity of the battery doesn't necessarily translate into usable periods of time.

Then there are variations in how manufacturers explain to the public the usable battery life.

Apple plays it fairly straight, claiming up to 20 hours and 26 hours for the iPhone 14 and Plus respectively for video playback of locally-stored footage. For streamed video, the numbers are up to 16 hours and 20 hours.

For audio playback, Apple insists the iPhone 14 can reach 80 hours, 100 hours for the Plus.

Google goes for "beyond 24 hours" and up to 72 with Battery Saver. In the small print, the Pixel 7 managed 31 hours of a "median Pixel user battery usage profile" switching between calls, data usage, standby, and other features. An approximation of typical usage, if you will.

Regardless of indirect comparisons, the bottom line is that both smartphone families will offer a full day's usage.

To recharge, the iPhones rely on Lightning or wireless charging via Qi or MagSafe. The Pixels have USB-C 3.2, and can also be wirelessly charged, though it also has a Battery Share feature so you can offload some power to other Qi-supporting hardware.

In all cases, a fast-charging facility is available, achieving a 50% charge within 30 minutes with a suitable power supply.

All smartphones are rated to IP68 for water and dust resistance.

For biometric security, Apple relies on Face ID, using the depth-mapping capabilities of the TrueDepth camera. The Pixels have Face Unlock, but also an in-display fingerprint reader.

The color options for the Google Pixel 7.

Apple's iPhone 14 and Plus are sold in five colors: Midnight, Starlight, Blue, Purple, and (Product)Red.

Close battle of the giants

It's always understood that there is a difference in ethos between using Android and using iOS. Each camp has the ideal operating system for its needs, and the Apple and Google-produced hardware is the best option to get the optimal experience.

Both Apple and Google operate extremely healthy and well-rounded ecosystems, and for the average user, there's little to disappoint them. They're quite similar in that respect.

That similarity also extends to both sides producing a 2022 smartphone that's not a complete overhaul of the previous version.

Google may have a better large screen, but the Pixel 7's resolution relative to size means both of Apple's devices fit in the midpoint of the Pixel 7 and Pro. Apple also arguably does better in raw performance, but you have to consider how they put the components to work, and Google's imaging features may put itself ahead for some people.

Overall, Apple takes it, but this is a clear warning shot from its rival that closes the gap more and more every year.

Google includes features that the iPhone 14 Pro line received while Apple held back the iPhone 14 pair, including an always-on display and a high-resolution rear camera. Pro-grade features for non-Pro money, if you will.

If Apple included these elements, or even things approaching them, in the iPhone 14 instead of trying to increase the differentiation between the non-Pro and Pro lines, it wouldn't be anywhere near as close a race as it turned out.

Wireless carriers AT&T and Verizon are offering deals on Apple's iPhone 14 and iPhone 14 Plus that can knock up to $800 off the models with trade (valid at press time).

Verizon and AT&T are also incentivizing the Google Pixel 7 and Pixel 7 Pro.