AppleInsider
Posted: December 30, 2022 2:53PM
in iPad edited December 2022
With the release of the DaVinci Resolve video editor, the iPad now has many editing apps, and it's become significantly more useful for intensive, pro work. 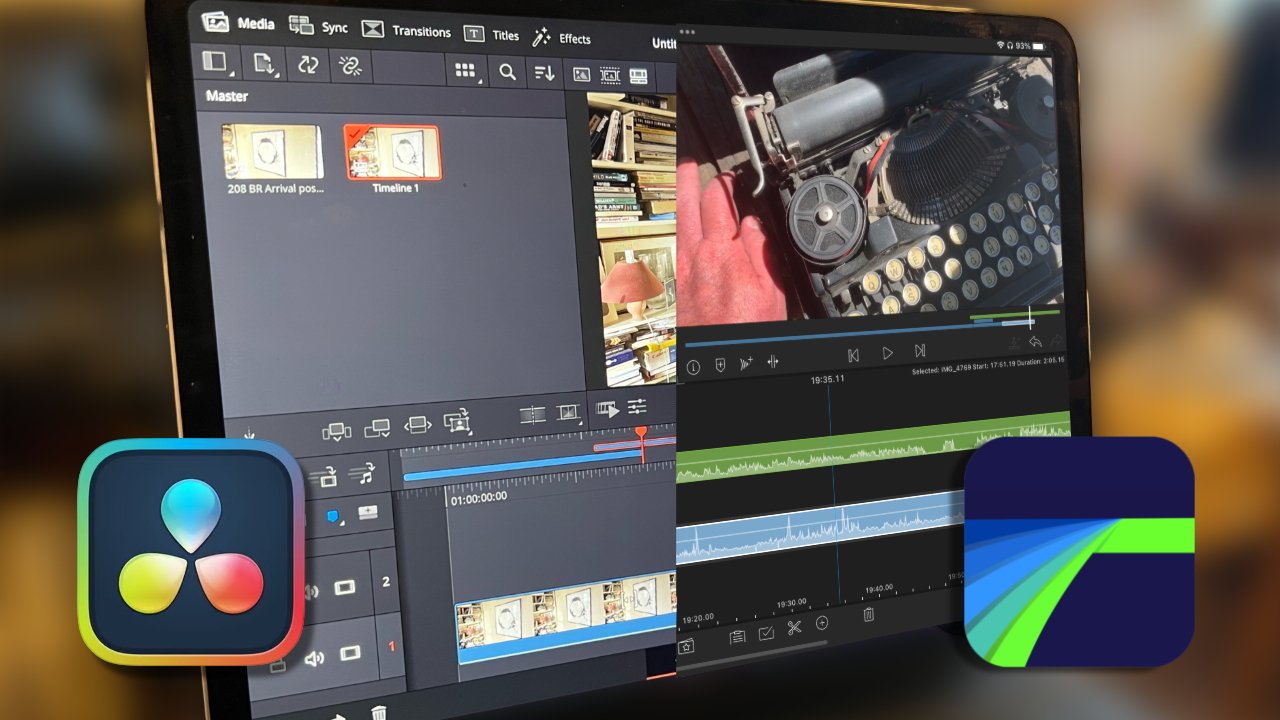 Right from the start of the iPad in 2010, you could edit video using Apple's iMovie -- and perhaps you did because there was no other choice. As capable as iMovie is, however, you're not going to be editing video for broadcast or streaming on it, and that meant the iPad was impractical for editors.

Or it was until 2016, when LumaFusion came out for the iPad. It was followed in 2018 by Premiere Rush, a cut-down version of Adobe's industry-standard desktop video editor.

And now in 2022, we get DaVinci Resolve. That's another industry-standard desktop video editor, and with it coming to iPad, the only heavyweight iPadOS holdout is Apple's Final Cut Pro.

Yet even without Final Cut Pro, the addition of DaVinci Resolve means that there are now four major video editing apps available on the iPad. They range in price from free to a very inexpensive one-off-fee, or a costly monthly subscription.

Deciding what you want to do

It's reasonable to assume that you should choose your video editor based on what video you're making. But really the decision is at least as much about how you're getting the original footage, how you'll store it, and how you're going to show it at the end.

That's what really splits video editing apps into different camps. At the basic end, you have iMovie which is remarkably capable, but you wouldn't edit a TV show on it.

You can safely ignore Rush unless you are already paying a subscription for the Adobe Creative Cloud that includes it. In which case, it might be worth a spin for short pieces of work, especially since you can export them to the full Premiere on the Mac.

Really you should also ignore iMovie, but it is a much better balance between features and ease of use than Rush.

Part of that ease of use, though, comes from how iMovie uses the iPad's Photos app. So anything you put in there is available to the video editor.

Plus you have to leave iMovie in the foreground throughout the exporting. If you go away to another app, the export fails and you can't just tap Save to Files again, you have to go back to the Sharing option.

For years, users have complained that the iPad and especially the iPad Pro have been held back by iPadOS and the apps available for it. Now while that is arguably still true, we have two heavyweight video editing apps -- and maybe neither is going to transform the iPad. 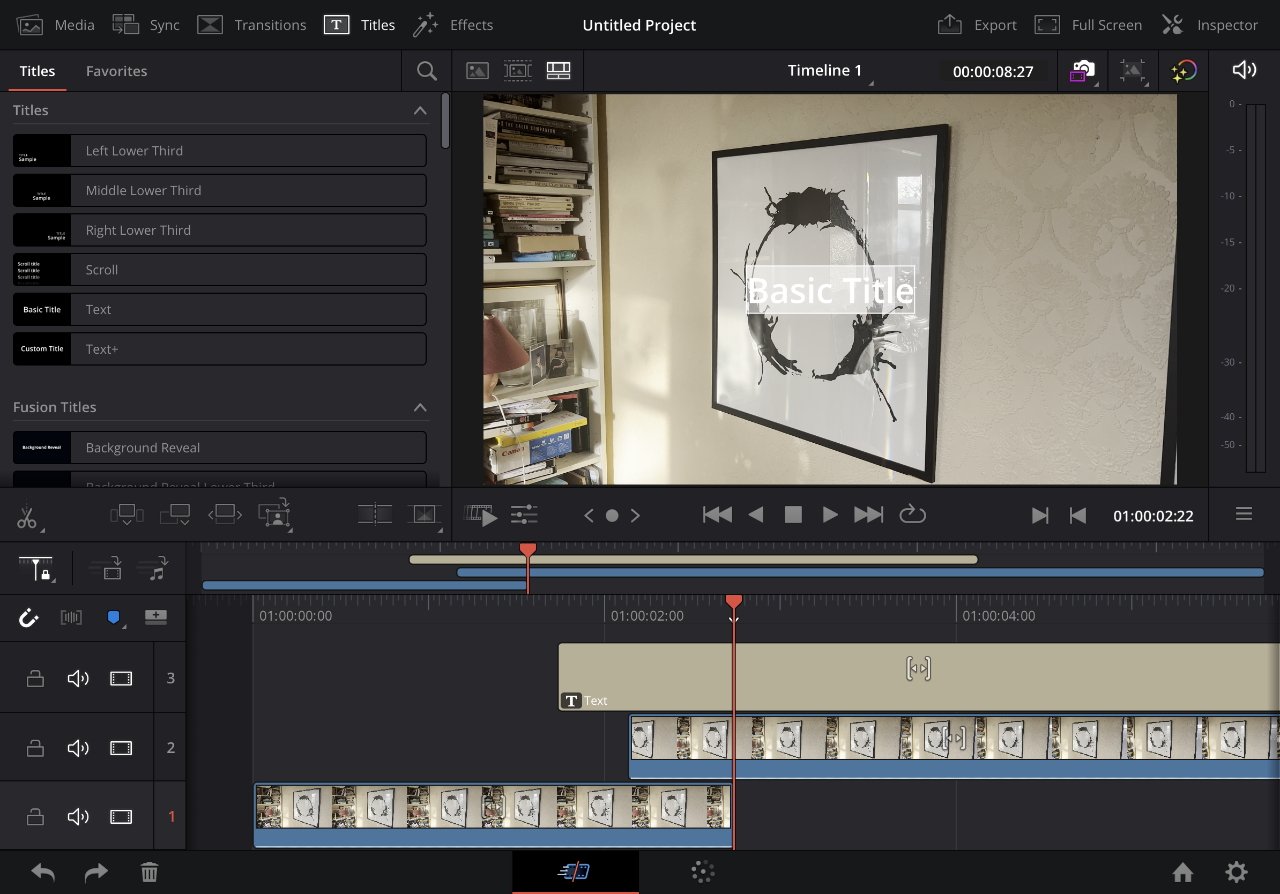 Come to DaVinci Resolve and LumaFusion on the iPad as a pro video editor and you're going to have certain concerns. As well as the one everyone would have of what the apps can do, pro editors have to think about who they're working for.

Only on the very smallest microbudget production might a video editor do the entire job on an iPad. It's much more likely that they will spend most of their time with a desktop video editing app.

If that's the case, it means professional video editing features like LUTs and grading are nice on the iPad, but not essential. What is essential is being able to do useful work on the iPad, then pass that video on to whatever desktop editor your production is using.

With iMovie, ultimately you save the finished video file to a Mac, where you then import it from within Final Cut Pro. It's quick, but Apple warns that some iMovie features like templates won't survive the trip.

LumaFusion has an interesting alternative. It can save an XML file of your edits, a plain text record of all you've done, and that can then be imported into Final Cut Pro -- though it requires a one-off $20 in-app purchase.

DaVinci Resolve is the best for this interoperability between desktop and iPad editing, though. Both the iPad and Mac versions of the app use the same file format and you can open them in either as you need. 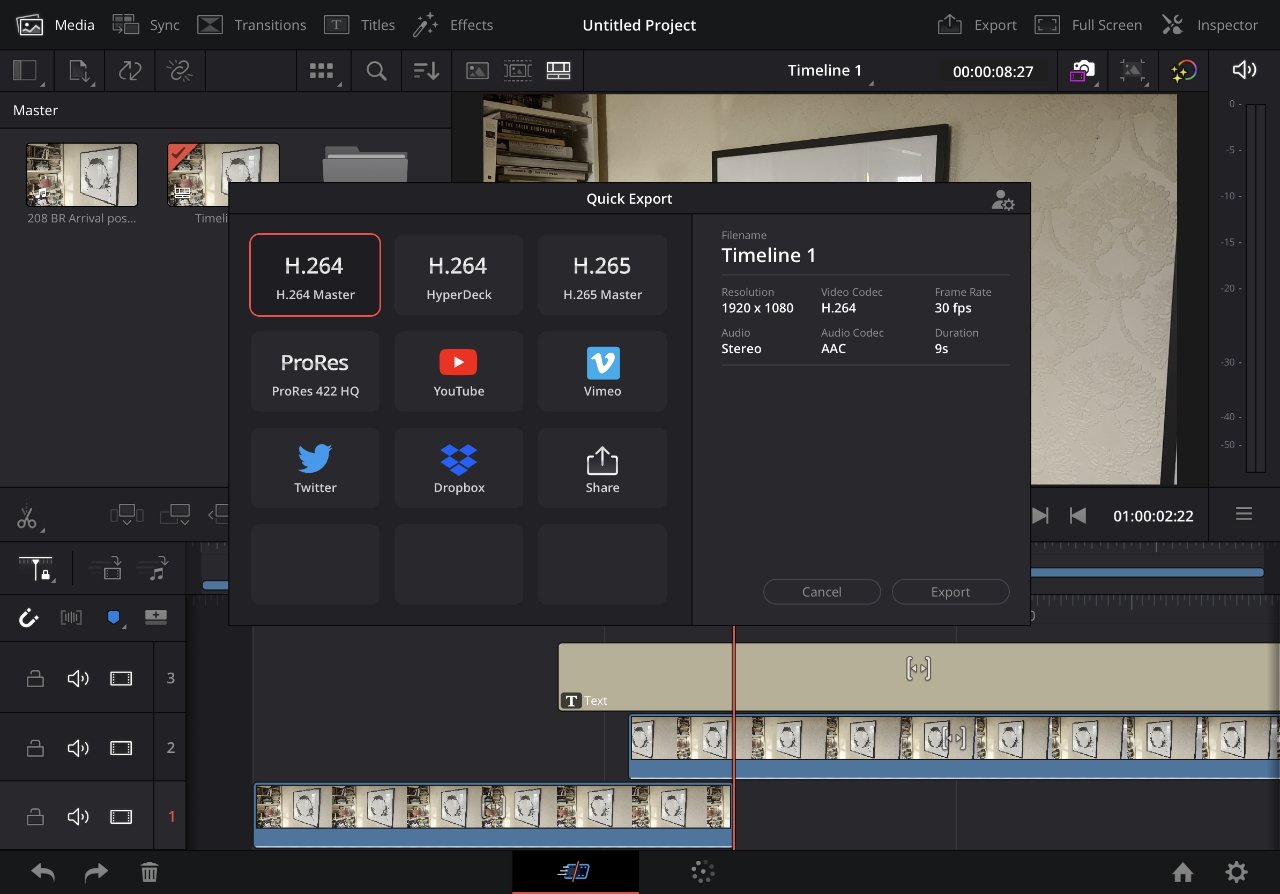 Video editing features on the iPad

Even though you'll want to finish editing videos in a desktop app, there have to be some strong features in the iPad one or it wouldn't be worth getting.

DaVinci Resolve for iPad wants to be functionally identical to DaVinci Resolve on the Mac, and pretty much accomplishes it. There are differences to the layout reflecting how Macs have menubars and the iPad doesn't, for instance.

Plus there are fewer options for exporting finished video from the iPad version. And for an iPad app, it really needs a keyboard and trackpad. 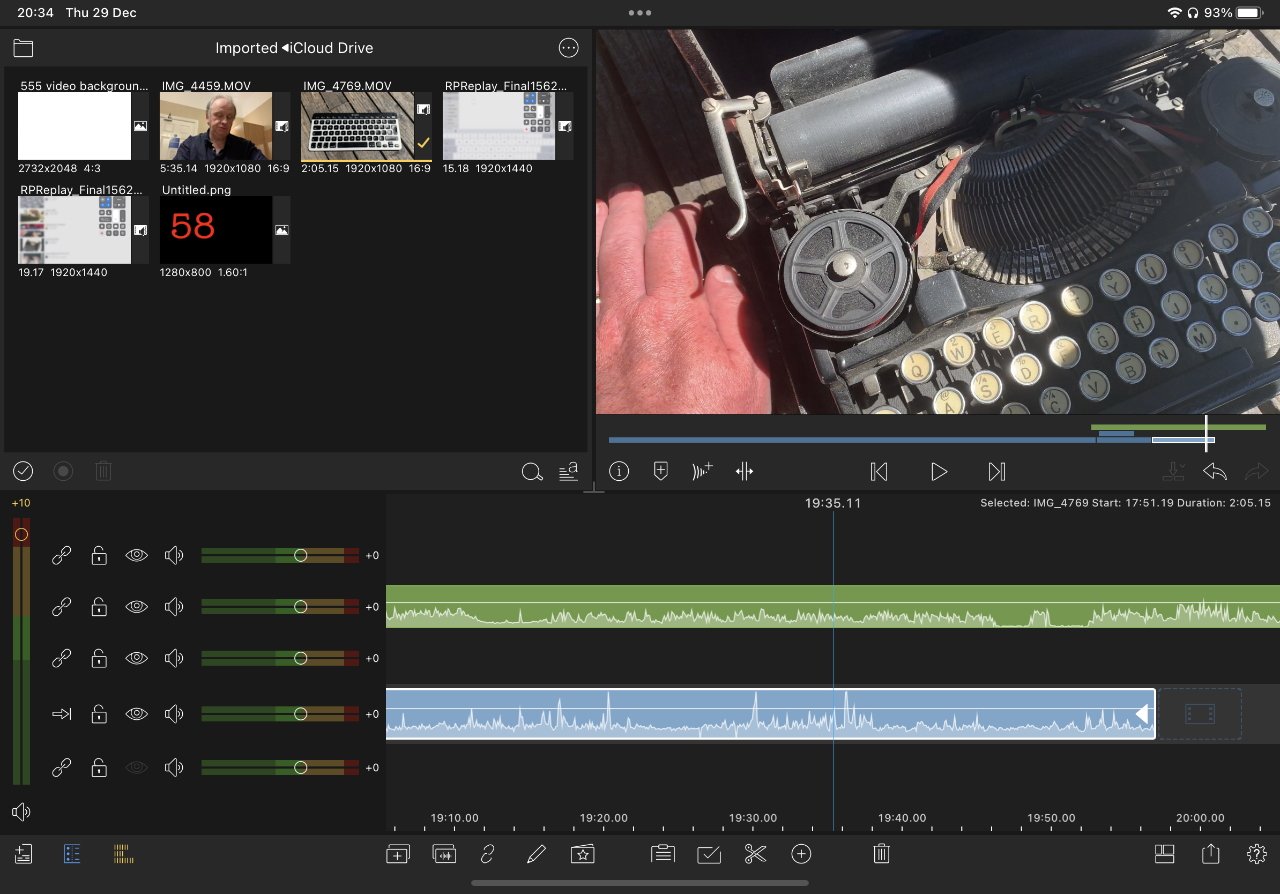 LumaFusion has the advantage of having been on the iPad for six years. One consequence of this is that it is both a mature app, and one that came out before Apple added keyboard and trackpad support.

So while it obviously works with those now, it's also good for finger gestures. For instance, tapping one finger to the left and one to the right of the playhead, splits the video.

That's so natural that you actively miss it on desktop apps. And it's also part of what perhaps makes LumaFusion faster to learn for new users.

Where you're coming from

This ease of use of LumaFusion is appealing because every video editor wants to get on with editing video, not with learning more tools and options. So if you're coming from iMovie or Adobe Premiere Rush, LumaFusion is the best choice.

It's a shame there isn't a Mac version of LumaFusion -- except now, in a sense, there is. Thanks to Apple Silicon, M1 and M2 Macs can run iPadOS apps if the developer allows it, and LumaFusion does.

But if you're coming from DaVinci Resolve on the Mac, there's no question but that DaVinci Resolve for iPad is your best choice. Although different, it's similar enough that learning it is fast.

The question is when you're coming from Final Cut Pro to using any video editor on the Mac. You will find iMovie is fine when you start with it on the iPad and then go back to the Mac, but you will be frustrated starting on FCP and going to iMovie.

In that case, consider how much video you're going to edit on the iPad. LumaFusion and DaVinci Resolve are equally strong on the iPad now, but if the iPad becomes your main machine, DaVinci has an advantage.

It has the advantage that once you're deep into using DaVinci Resolve for iPad, you can get it for the Mac and replace Final Cut Pro. As excellent as FCP is, having one app means just one to learn -- and easier moving back and forth.

Cost is a factor

You can't want professional apps on the iPad and assume they will come at consumer prices. Except, somehow, they do.

LumaFusion is a one-off cost of $30 on the App Store. There is the Final Cut Pro exporter, which as a $20 one-off payment, though, and there is a subscription stock footage library called Storyblocks.

DaVinci Resolve is free for Mac and for iPad. If you like it, you'll tend to like it so much you want to pay the company something, and there is an option to do so.

On both Mac and iPad, there is an upgrade to DaVinci Resolve Studio for $95. Just as with the Mac, this Studio version gets you more features, such as effects, noise reduction and so on.

It's not as straightforward an upgrade as it should be, however.

There's no update button, no Pro page in the app. Instead, you only get the option to buy DaVinci Resolve Studio when you try to use an effect that isn't available in the regular version. 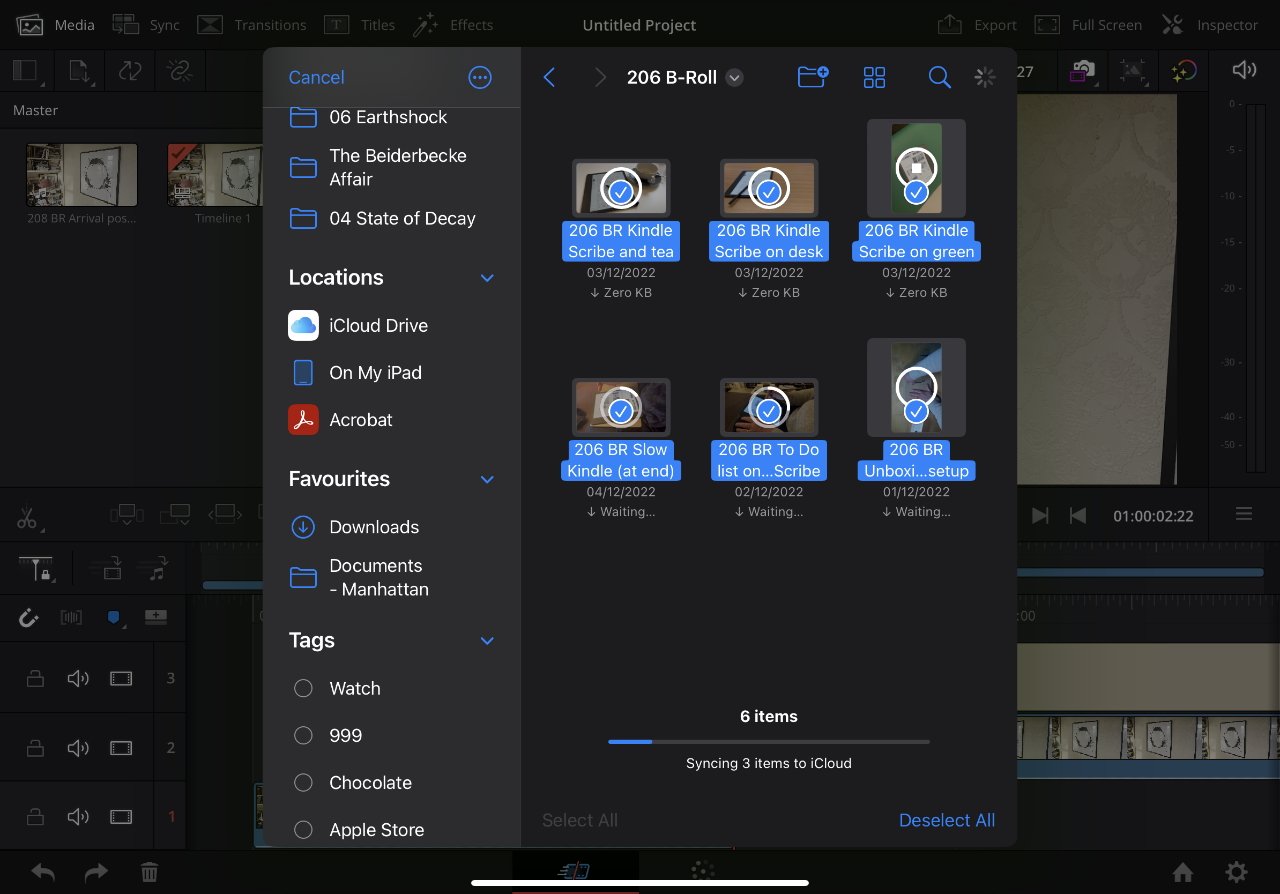 It's true that your first consideration has to be what type and sheer quantity of video you're planning to edit, and what you'll do with it afterwards. But if you don't have devices that can run these apps, your hands are tied.

LumaFusion requires iPadOS 15.4 or later, when you're running it on the iPad. If you want to run the same app on the Mac, that device must be an M1 or M2 one, and it must be running macOS 12.3 or later.

Handily, LumaFusion even works on the iPhone, so long as it has iOS 15.4 or later.

DaVinci Resolve requires iPadOS 16.0 or later. It's optimized for the M1 and M2 processors, but can also run on iPads with the A12 Bionic processor or later.

The Mac version of DaVinci Resolve is a separate app, it isn't an iPadOS one running on Apple Silicon. It requires macOS 10.15 or later.

Note that regardless of which app you choose, video editing requires a lot of storage space -- and fast access to it, too. Neither DaVinci Resolve nor LumaFusion specify minimum storage requirements, but invariably you need as much as you can budget for.

The iPad comes of age

You can argue that Apple should really bring Final Cut Pro to the iPad, but now that we have DaVinci Resolve -- and we've long had LumaFusion -- it is possible to do serious, professional video editing on the iPad.

It's possible. Whether it's probable that users will do it, though, we'll have to see. So far there have been TV shows edited in LumaFusion, but if it were used for every episode of an NBC show, for example, the makers would be shouting about it very loudly.

More Hollywood work is edited in DaVinci Resolve, but anecdotally, its usage comes behind Final Cut Pro and definitely behind the industry leader, Adobe Premiere.

So perhaps we can also argue that Adobe should bring the full Premiere Pro video editor to the iPad.

There's no sign of that, or of Final Cut Pro, and yet video editing has never been in better shape on the iPad. This could be the start of making the iPad Pro the full Pro tool it can be.

But even if it isn't, we've now got serious, heavyweight video editing options on the iPad.