AppleInsider
Posted: January 6, 2023 11:02AM
in iPhone
Apple introduced the MagSafe accessory ecosystem as a new charging solution for iPhone, but the ShiftCam SnapGrip evolves the concept with an interesting click-on photography tool. 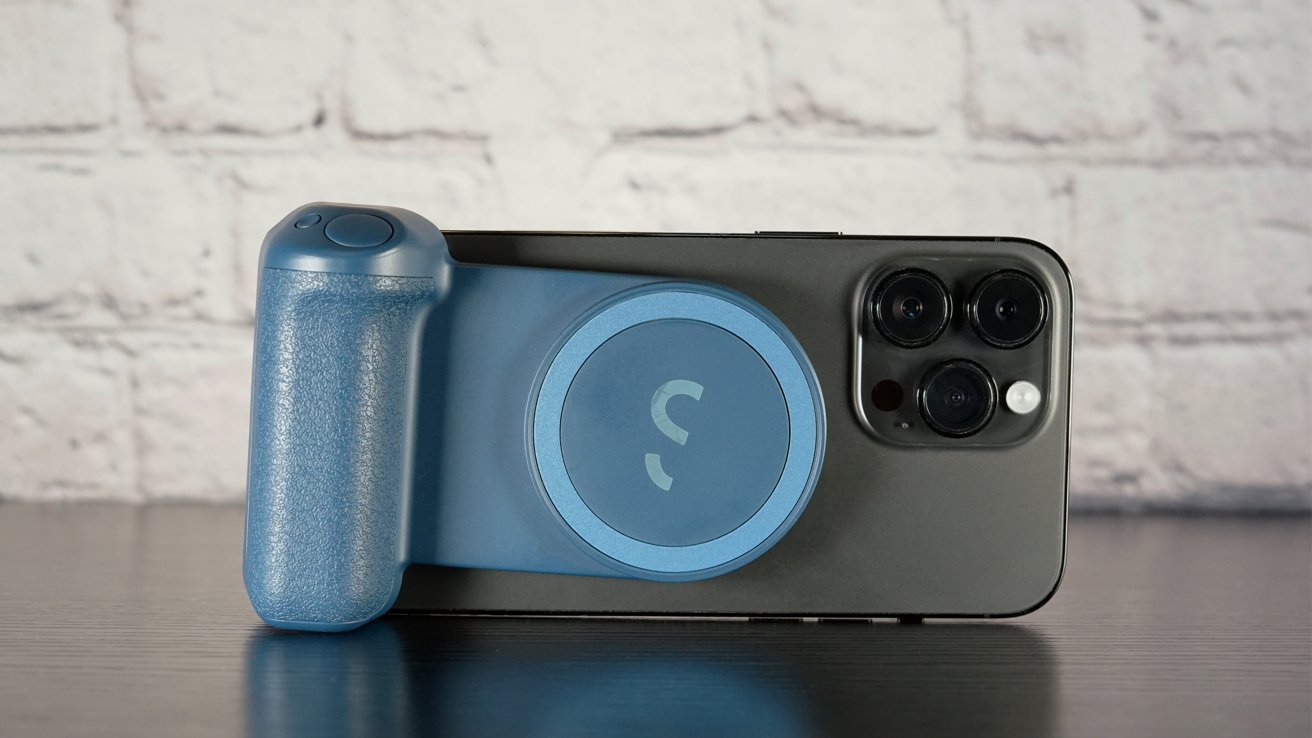 ShiftCam SnapGrip uses MagSafe to attach to the iPhone

Your iPhone might be the best camera you own, or at the least, the most portable. However, shooting images can be somewhat cumbersome with its slick soap bar design and fiddly touchscreen shutter.

The ShiftCam SnapGrip addresses these issues and more with a unique solution -- a MagSafe grip. This isn't the first photo-friendly MagSafe grip we've seen, but it is actually shipping to customers and is somewhat unique in its overall approach.

This review focuses primarily on the SnapGrip itself, but we tested the entire Creator Kit, which includes a ring light and tripod mount. These products are part of an emerging MagSafe category that we hope to see more of.

The SnapGrip itself is a simple battery pack that attaches to the iPhone via MagSafe. It has a rounded grip similar to a DSLR and a shutter button for easy capture.

Like other battery packs, it must be powered on with a button press to begin charging. It has a 3,200 mAh capacity rated at 11.84Wh, which translates to a few hours of additional iPhone use. It charges via USB-C.

However, the battery pack isn't the primary feature of this product. We like that the battery is there, but its main use is as a photography grip.

The battery adds a nice heft to the grip, which also somewhat counterbalances the iPhone's weighty camera system. There are two buttons positioned on the thumb rest -- a shutter button and a power button. 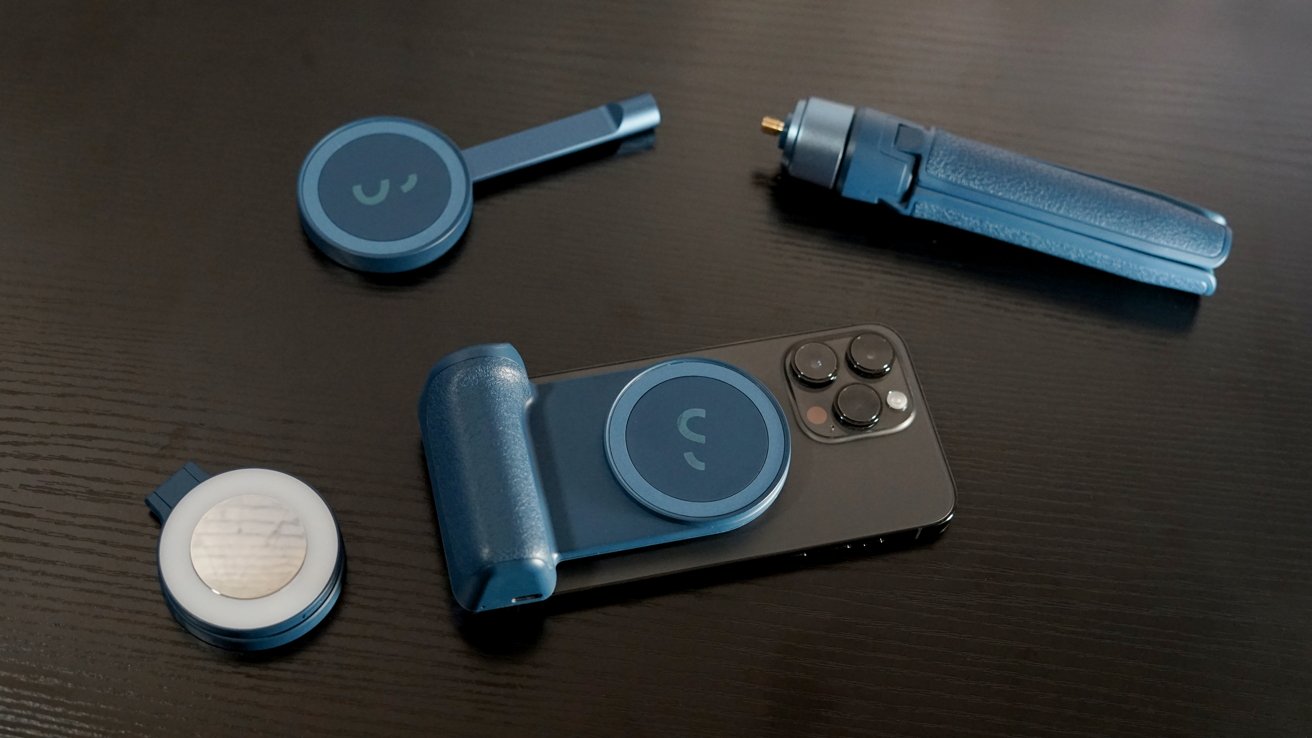 The ShiftCam Creator Kit comes with a light, tripod, and grip

The circular magnet is the primary mounting surface on the iPhone, so it can be mounted in any orientation about 270 degrees around. Obviously, it can't be mounted in the opposite direction because of the camera bump.

MagSafe doesn't provide any data or information to the iPhone, so all the iPhone knows is you've attached a battery pack. The shutter controls are paired using Bluetooth.

The general construction is solid. It is made from hard plastic with a texture applied to the grip. The magnetic mounting points are rubber for increased grip.

The SnapPod is a tripod mount with a standard 1/4-inch attachment. The lollipop-shaped piece is a MagSafe connector that can be attached to any standard tripod mount, but ShiftCam includes a tiny tripod with the kit.

The tripod itself could be better, but it is useful in a pinch if you need to steady your hand. Closing the tripod gives you a usable monopod too. Sadly, the ball joint can't be tightened enough to secure the mount, making the iPhone stand skew easily.

Since the MagSafe piece can attach to any of the SnapGrip accessories, it also works great for mounting the SnapLight or iPhone separately. The SnapGrip can be used while attached to the iPhone primarily, but it also works as a remote shutter thanks to the Bluetooth connection.

The SnapLight is a magnetically attachable light with four brightness settings. It is entirely analog, so powering it on, controlling brightness, and powering it off requires physical button presses.

Likely to keep from overcomplicating the products, the SnapLight only charges via USB-C. Unfortunately, that means it has its own internal battery and must be charged between uses.

The SnapLight does not charge when connected to the SnapGrip.

After some initial setup, the SnapGrip is a great photography accessory. You'll need to pair it to your iPhone via Bluetooth, but it should automatically connect after that.

The shutter button isn't actually communicating a shutter press to the iPhone. Instead, it sends a volume-up command, which should activate the shutter in the Apple camera app and third-party apps. 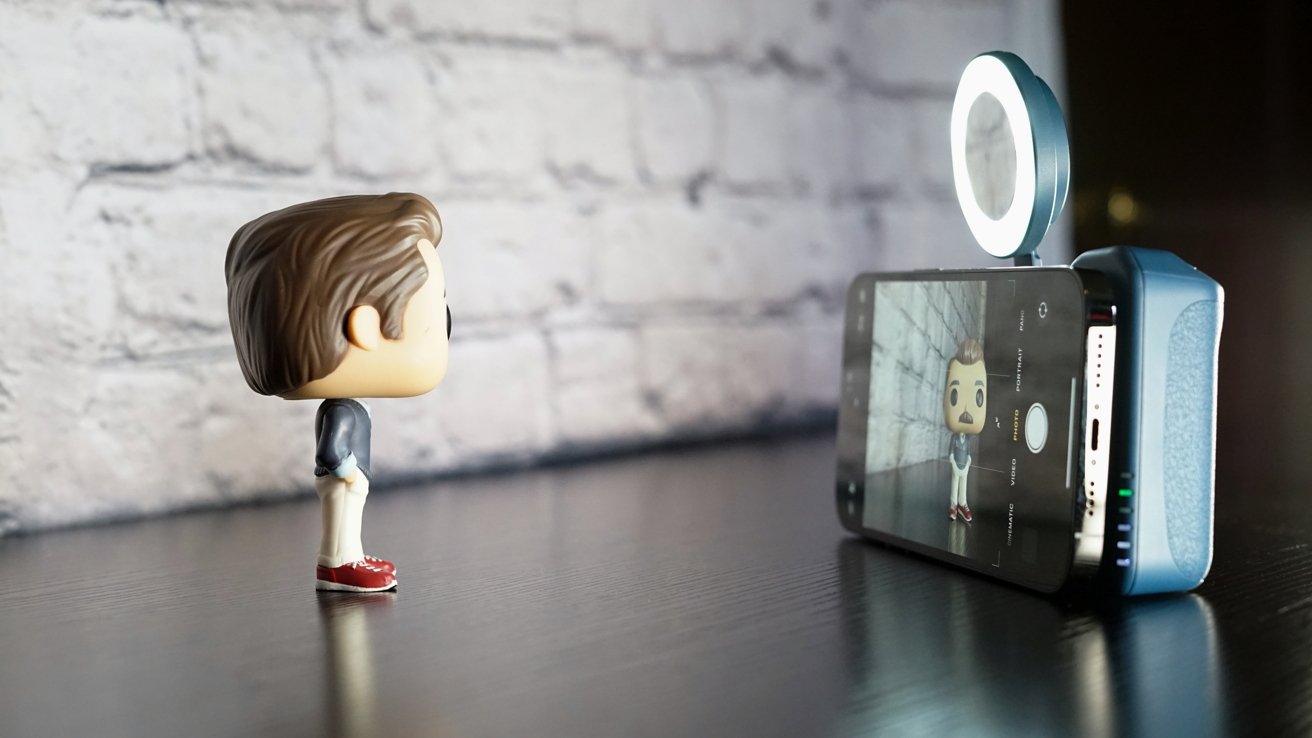 The ring light can be harsh in some conditions

Anyone who takes plenty of pictures on an iPhone will have encountered the annoyance of trying to hit the shutter while holding the phone one-handed. Pressing the volume button causes you to shake the entire device, and reaching for the display shutter button can sometimes lead to switching camera modes instead.

With the SnapGrip, users can simply click the shutter button, similar to a DSLR. The button press is soft enough that the device won't shake, and the button is naturally located below the thumb.

The MagSafe attachment is a double-edged sword, however. We like the freedom of taking photos or videos in portrait or landscape using the grip, but it is too easy to move the phone around while holding it.

The added accessories in the Creator Kit are also hit-and-miss. The SnapLight might be helpful in specific situations, but it feels too bright even at the lowest setting and washes out our face or subject.

The SnapPod is nice since it makes attaching our iPhone to any tripod simple. However, it isn't useful when coupled with the SnapGrip except in specific situations. For example, you can't take a photo and hold the monopod simultaneously, but two-handed operations are easier with it. 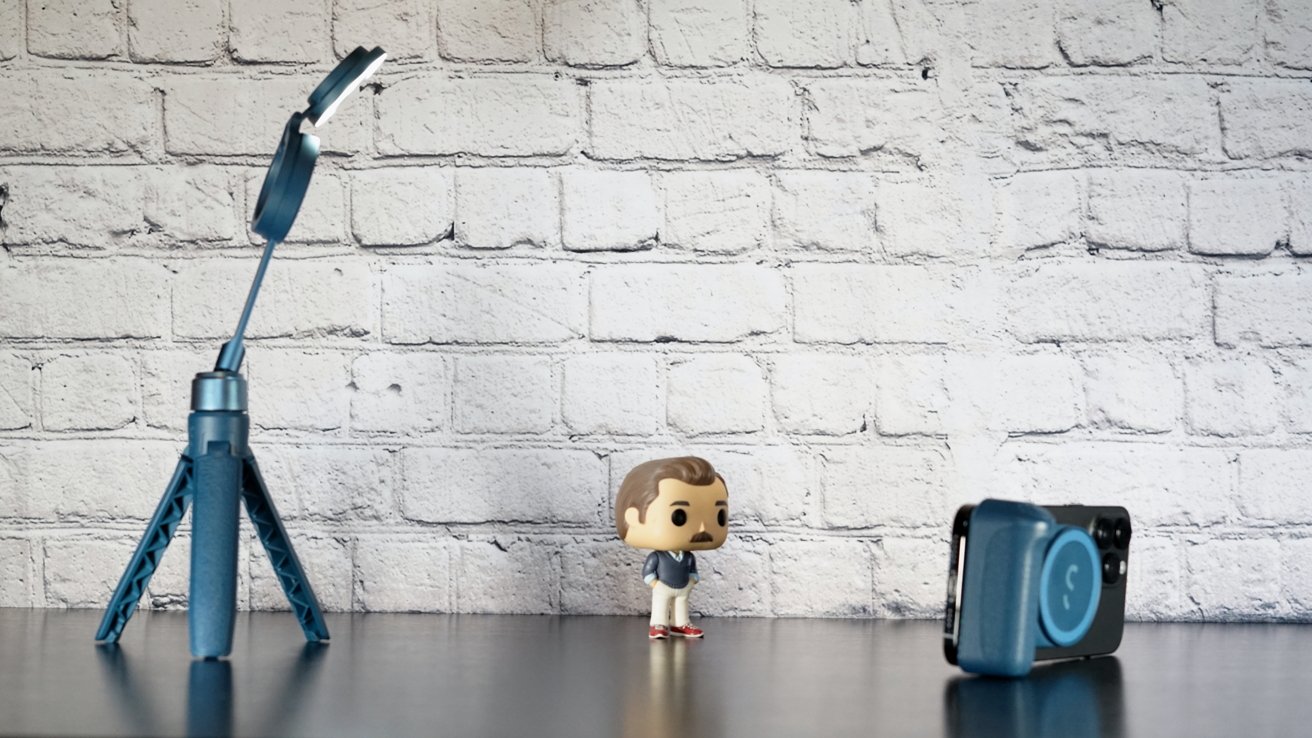 The battery pack may have a small capacity, but it is better than nothing. Shooting a lot of photos or long videos can quickly drain an iPhone battery, and the SnapGrip has enough capacity to add hours of shooting time.

While this isn't a particularly compact product, it is very useful. We won't be taking it out on every trip, but we'll have it on a photo-heavy hike or family outing instead of a standard battery pack.

ShiftCam has a great concept in its hands that begs to be iterated on. There are other bespoke shutter controllers and accessories that are trying to be much more complex while using MagSafe, however, we like ShiftCam's simplistic approach.

We're excited by the idea that several kinds of new MagSafe accessories could come from this move into photographic gear. Hopefully, this is only the beginning for ShiftCam. 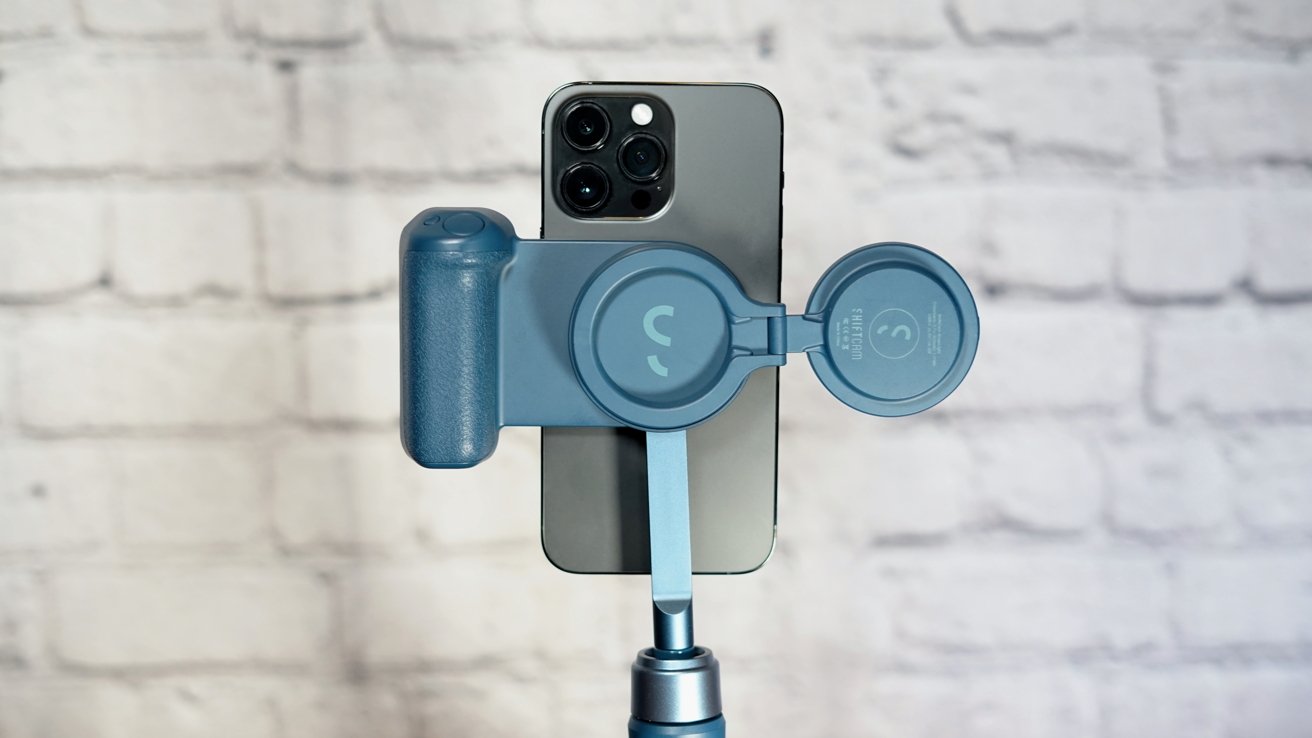 All SnapGrip accessories can attach to each other

The SnapGrip is an excellent option for any shutterbug looking for a good grip. The battery pack is just an added bonus, and the Creator Kit isn't a bad value, either.

The ShiftCam SnapGrip is a good first accessory ecosystem for this new MagSafe category. It has some room to improve, so our score is 3.5 out of 5 to suggest it is a better-than-average product.

Anyone that struggles to take pictures with the built-in iPhone tools should look into the ShiftCam SnapGrip. This accessory would also make a great accessibility tool since it improves control and grip for anyone that would otherwise struggle to hold the thin iPhone steady.

Where to buy the ShiftCam SnapGrip

The SnapGrip is available on the ShiftCam website for $69.99 alone or $129.99 with the Creator Kit bundle. We tested the Abyss Blue option, but there are four other options: Midnight, Blue Jay, Chalk Pink, and Pink Pomelo.