AppleInsider
Posted: January 11, 2023 6:43PM
in General Discussion
What does a kickboxing instructor think about Apple Fitness+'s new kickboxing classes that let you work out at home? 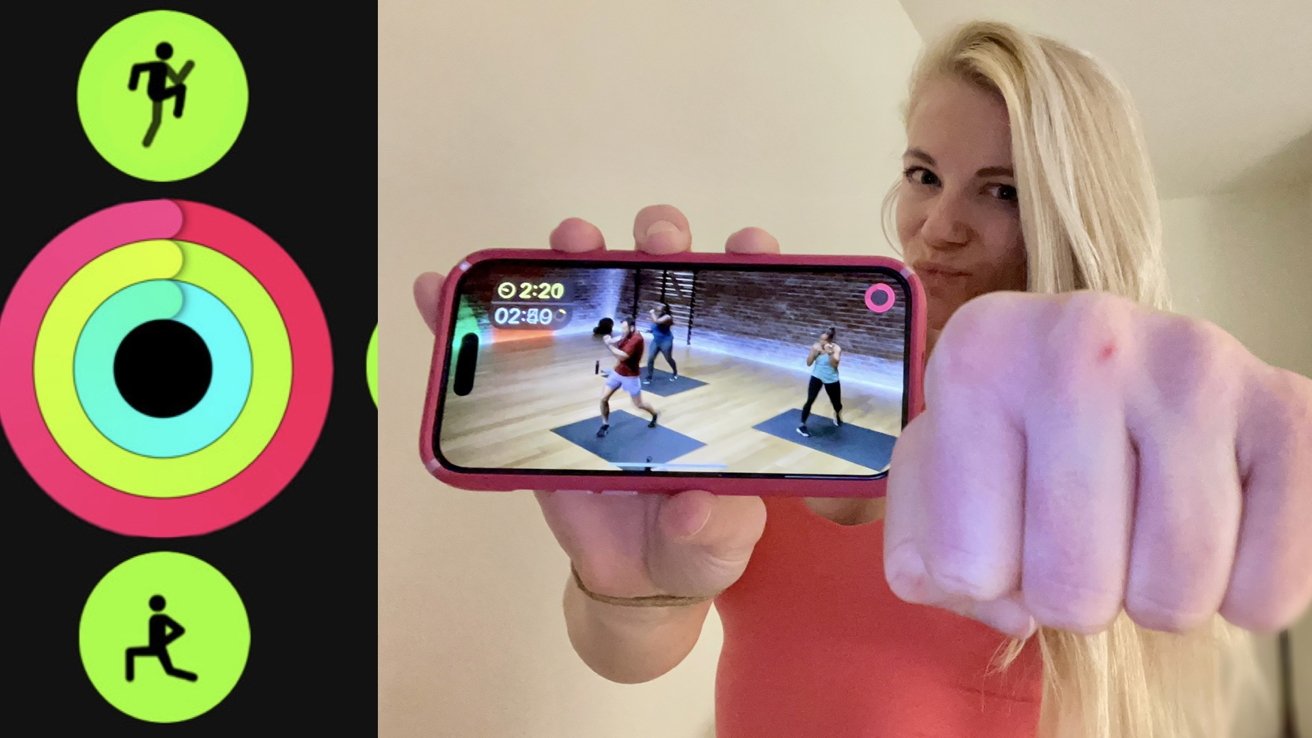 As a former exercise science lecturer who credentialed students, as well as a kickboxing instructor myself, I was excited to see Apple expanding its roster of equipment-free full-body cardio workouts.

However, Apple Fitness+'s new offering fell slightly short of my expectations, and for one important reason -- safety.

It is clear that Apple Fitness+'s goal for 2023 is to encourage new users to try the app, offering three months free for those who have purchased new devices.

Additionally, since September of 2022, Apple Fitness+ no longer requires users to purchase the Apple Watch in order to partake in their classes.

To date, the bulk of Apple Fitness+ cardio class options involve bulky equipment like stationary bikes, rowers, and treadmills. High-intensity interval training (HIIT) is offered, but its nature of all-out, anaerobic activity paired with short rest intervals can be off-putting for beginners or special populations.

With the latest addition, Apple Fitness+ users can choose from 10-, 20-, and 30- minute kickboxing classes.

The classes feature a number of kickboxing rounds (normally 3-5, depending on the class duration) that are combined at the apex of the workout and then topped off with a lightning move -- a one-minute, all-out intensity interval.

During the workout, your personal activity ring is displayed at the top of the screen. It is motivating to see the ring gradually close as the workout progresses.

However, I wouldn't give too much credit to Apple's calorie-burn metrics, which are known to be unreliable. 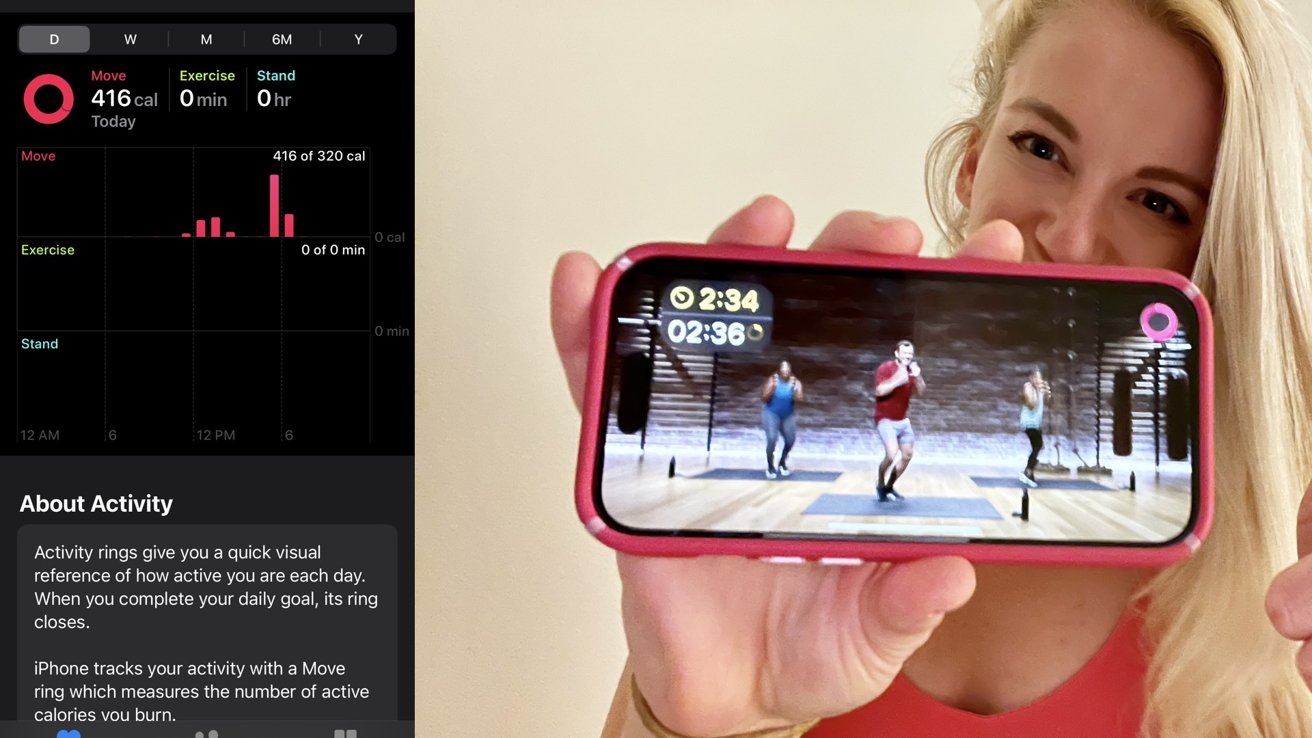 The shorter, 10-minute classes include a short warmup and successive rounds of upper and lower-body combat moves (jabs, punches, kicks, elbows, uppercuts, etc) before moving into a cooldown. The longer 20-30 minute classes include conditioning in between, like squats, fast-feet, and explosive plyometrics. 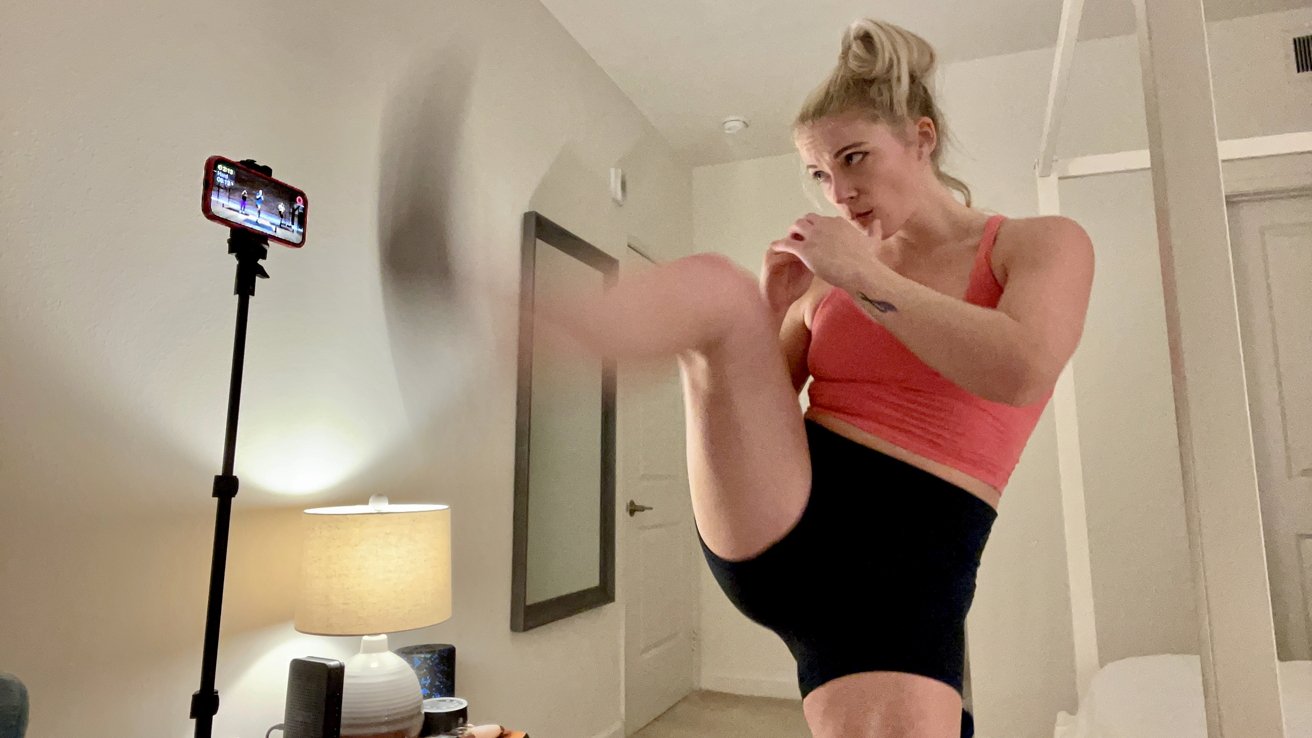 Apple Fitness+ Kickboxing classes can be completed in small spaces

One wonderful thing about these workouts is that the movements are contained, meaning that you can complete them in your bedroom or studio apartment.

This music is a high point -- spotlighting songs that are current and trending. Nothing kills an exercise high like poorly-made covers of your favorite songs.

There's no doubt that Apple Fitness+'s new addition, Nez Dally, simply shines. Nez is a Muay Thai fighter and the first woman to compete in Thailand with a hijab. 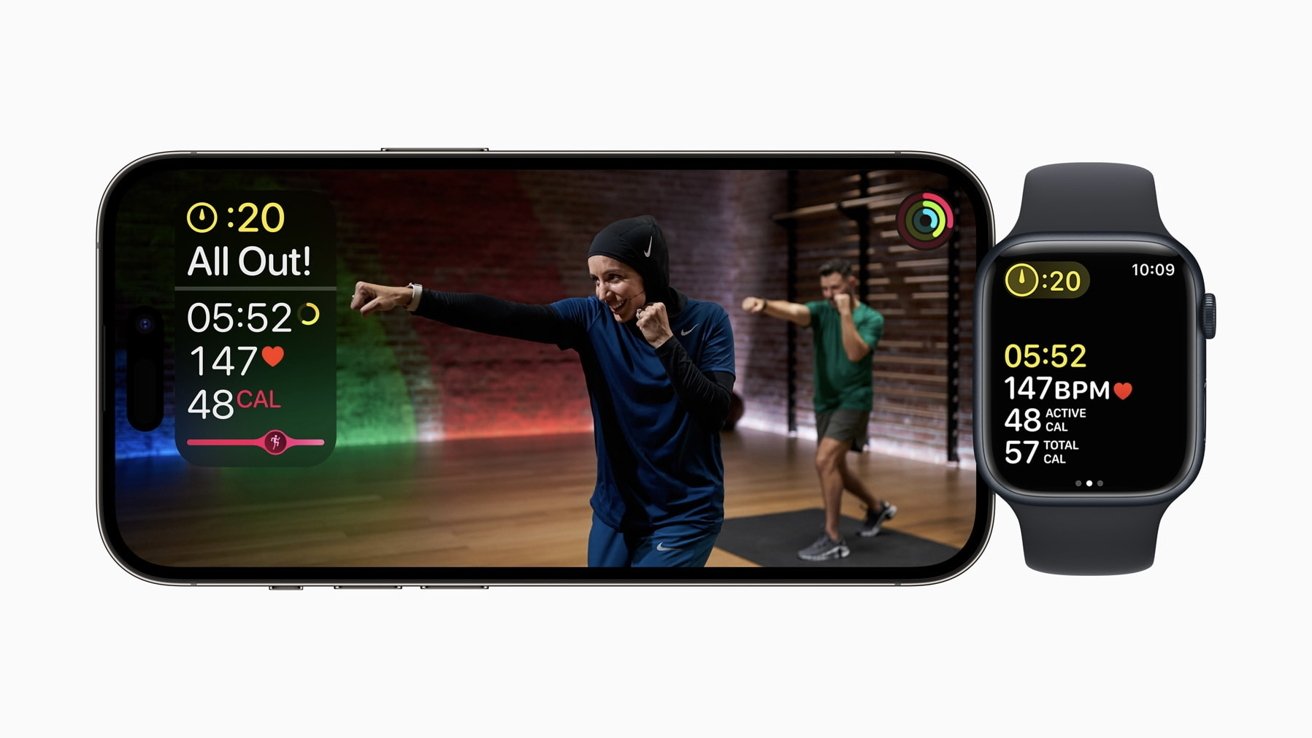 We've also got Apple Fitness+ resident trainer Jamie-Ray Hartshorne, Apple's HIIT and treadmill coach, whose "Never give up!" attitude will have you going all out till the end. 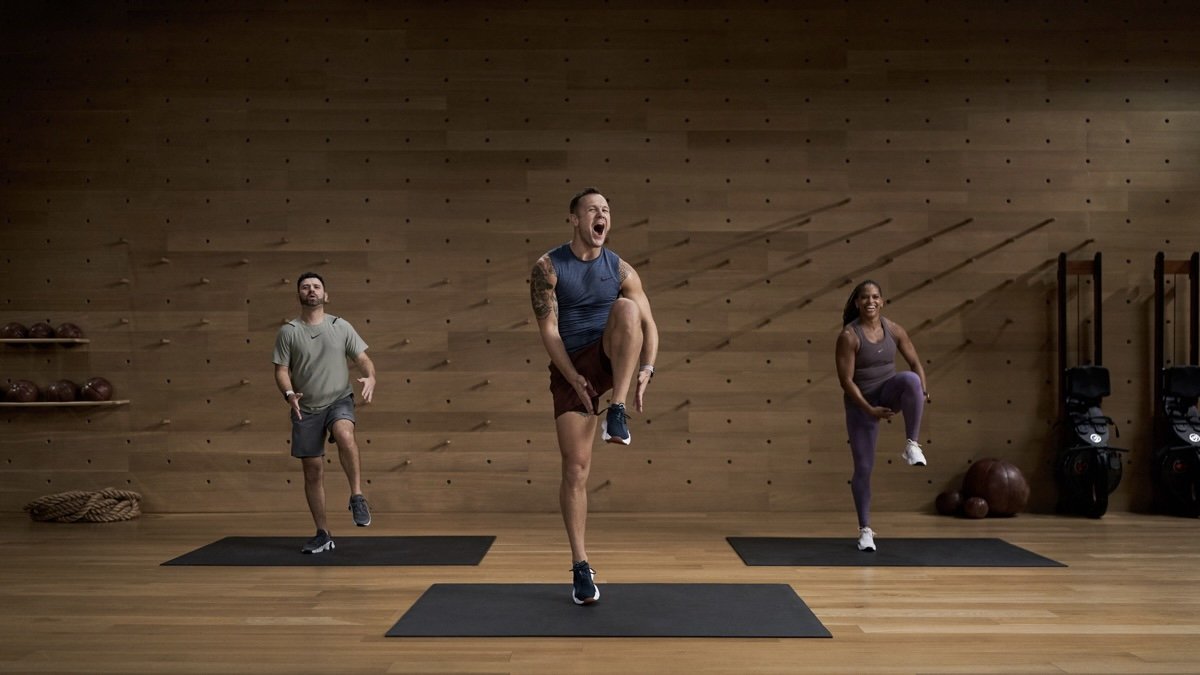 Both are infectious. Both kick butt.

This is where I'm torn. For someone who exercises daily, the classes are way easier compared to HIIT, and the combos, somewhat boring. However, for a beginner, the classes might be too difficult -- and in a word -- unsafe.

I completed each class offered. While the directional and motivational cues were absolutely on point, safety cues were not.

The most important cues for martial arts instructors are safety cues. Safety cues ensure the workouts can be safely completed by anybody -- which Apple Fitness+ has stated is one of its goals.

While there is a participant at the back of the workout showing workout modifications, the modifications are still not meant for everybody, and the safety cues are often not demonstrated or voiced fast enough.

For example, the golden rule for kicks and punches is never to lock out the joints, however, this safety cue is rarely stated when commencing these movements, and when it is -- it is said 16 minutes into a 20-minute workout. 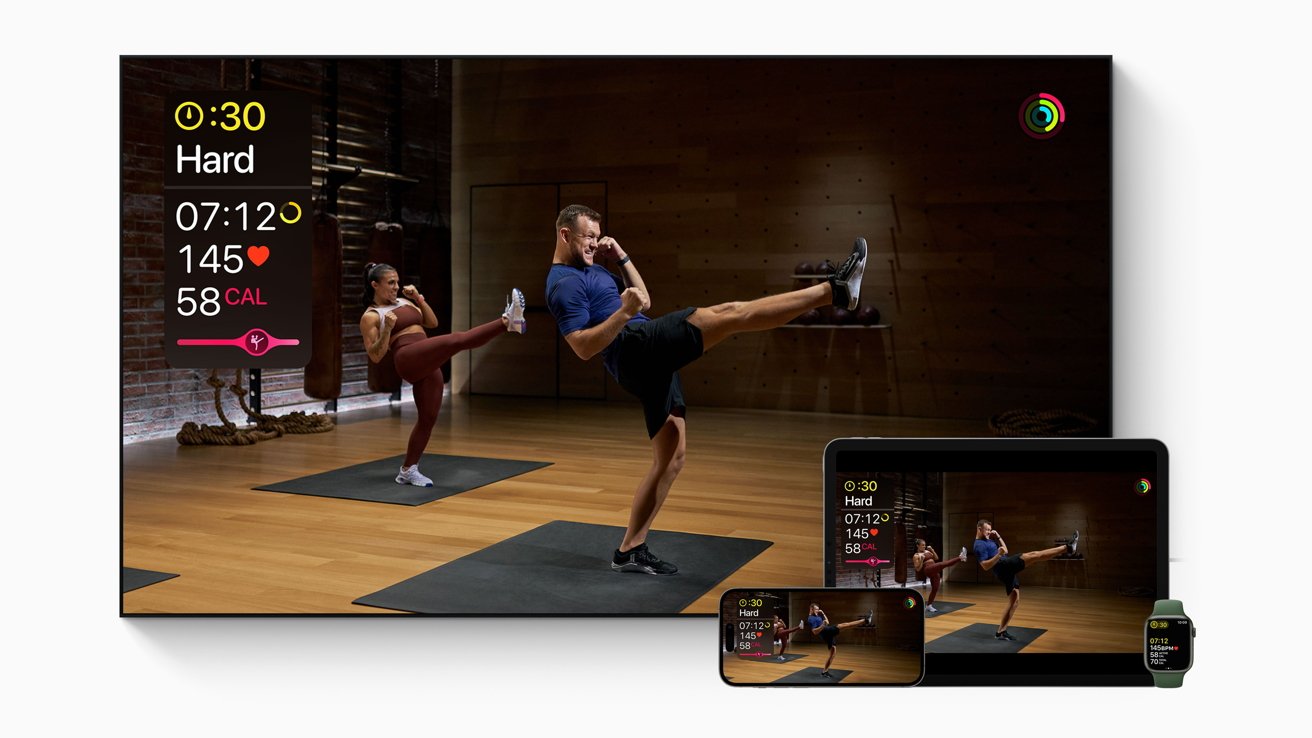 It is important for instructors to voice, and voice often, never to "lock out joints."

And when we're being asked to "Go all out! Give me all you've got!" with no instructor's eyes on us to ensure we're doing the movements correctly, this can lead to injury.

Another example is the heel kick, or sidekick. It is imperative that the participant's non-kicking base foot pivots on the floor to remove stress placed on the knee during the kick's delivery. This safety cue is never mentioned.

While there are some safety cues mentioned (core tight, buttocks squeezed, toes back, etc.) there is never an explanation for newbies how to properly perform the different kicks, punches, hooks, etc.

In addition, often the harder exercise variation is mentioned before the modification is demonstrated, making the beginner feel as if they should give the harder variant a go. This, too, can lead to injury.

The modifications themselves -- for example, a plank on the knees instead of on the balls of the feet -- are not always universalized enough. There are individuals who cannot safely get up or down from the floor.

This could be remedied by appointing another modification specialist to the back of the room, giving yet another option for further modifications. There is nothing worse than getting psyched about a workout and your fitness only to realize that you cannot even do the modification.

This is not the instructor's fault. It is the nature of the go! go! go! kickboxing workouts offered, which unfortunately sacrifice form for speed.

This form sacrifice for speed is further evidenced in the thirty-second to two-minute warmups and cooldowns -- not an adequate duration to acclimate the body into commencing or concluding such a high-energy workout.

How to safely start

While the workouts at times do sacrifice form for speed, these are still fun workouts to add to your regime -- but with a few tips in mind.

Tips for a safer workout

Warm up on your own before the workout for at least 5-10 minutes. Try marching in place or a brisk walk.
At the end of the class, you'll be prompted to click on Apple Fitness+'s offering of cooldowns. Please do take advantage. Do not take a shower before your heart and breath have returned to their normal rhythms.
Oftentimes, the harder version of the exercise is announced before the modification. Do not attempt the harder version; look to the modification specialist and follow along with them instead.
If you are new to kickboxing, google remedial kickboxing moves like kicks, punches, jabs, uppercuts, and hooks for technique. Practice before jumping in full force.
If the modification still doesn't work for you, don't give up! Simply march in place to keep your heart rate up before diving back in with the next (hopefully, doable) move.
If you find that you love this workout modality, take a kickboxing class at a credentialed gym to hone in on form and technique.

Cardio kickboxing classes can fight stress, improve bone strength and cardiopulmonary/respiratory fitness, and are excellent confidence boosters for teens and adults alike. There is no greater way to fight stress than to expel it from the body through kicks and punches.

With these tips and tricks in mind, you'll be equipped to smash Apple Fitness+'s kickboxing workouts.

In the end, what shines about these new workouts is the instructors. Their enthusiasm is infectious and will resonate in everything you do the rest of your day.