gene clean
Posted: May 17, 2006 5:05PM
in AppleOutsider edited January 2014
Well, Arsenal got their asses handed down to them. Barça is the new Europan King. Henry was almost dead the entire game, and Ronaldinho wasn't any better either. The beauty of Barça, it seems, is that it's a team and it can play good even if its star player chokes. 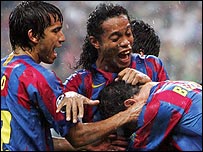