AppleInsider
Posted: June 25, 2016 11:54AM
in General Discussion edited January 2021
Right out of the box, you can tell that DJI's Phantom 4 is a complete reimagining of the entry-level lineup. From the sleek chassis to advanced automated controls, DJI has set a new standard, leaving competitors and its own legacy models in the dust. 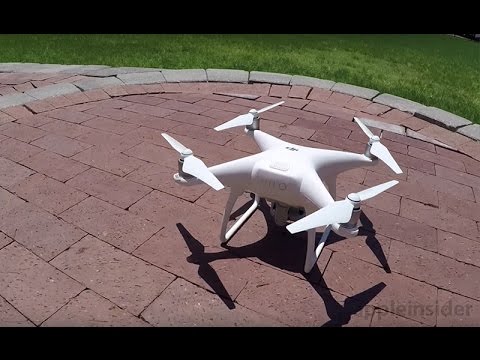 The shell of the Phantom 4 shines back at you with a sporty, glossy white finish. The motors stand tall with the quick release propeller mounts atop. Being raised, these stators are supposed to help get props out of the shot and brake faster at higher speeds in the new sport mode. The quick release props are actually an innovation born from the Inspire 1 series, so it's nice to see them sending this feature downstream. Another noticeable upgrade is the integrated gimbal and camera. Anyone who has flown or owned a Phantom 3 or earlier will be immediately drawn to this part of the new design. There are gimbal motors on both sides of the camera instead of just one centrally located part. Everything just feels better in yours hands and you begin to recognize the difference. This camera was born to be on this drone, not just stuck on the outside like the Phantom 3. The safety clip is even designed with more thought and consideration for proper storage, nothing is wobbling or shaking when you take it out of the box, everything feels sturdy and meant to be together. Neatly integrated where the body and the landing gear meet, the two vision sensors make their appearance. The SD and Micro USB slots are integrated and centered beautifully on the left hand side of Phantom 4's chassis.

In lieu of a complete body change on the Phantom 4, it's only fitting that the intelligent flight battery has also been redesigned. This is nothing new for DJI owners because they have never released a quad copter that can re-use the previous model batteries (or almost any accessory for that matter). Battery charge time was a little longer than the Phantom 3 at about an hour to charge, though flight time is also a little longer at around 24 minutes. The new charging port style on the battery is accompanied by one of the most noticeable differences in the entire package, an all white charger. This is definitely one of the more "Apple inspired" updates and something that perhaps they had some input on for displaying in the stores during the launch period. The new charger is also much like a lightning cable where it can be inserted in either orientation and still receive a charge.

Moving to the flight controller, the unit shares the same white finish as the body and the form factor is pretty much identical to the Phantom 3. However, there are a few differences in the buttons and switches on the P4 controller. Next to the video record button, the Phantom 4 has the switches for "P-S-A" instead of "P-F-A" on previous versions. "P" is now the flight mode that has all of the Intelligent Orientation Control (IOC) settings like Waypoints, Active Track, Tap to Fly, Point of interest, and others. With the addition of all these new features like active track and the vision sensors, the new "P" mode is limited to flight speeds of 22 MPH. That's where sport mode comes in. "S" is the new "Sport Mode" which allows you to get more aggressive with your Phantom than ever before. None of the intelligent flight modes are available in sport mode. "A" or Attitude (Atti) Mode is the same as before, keeping altitude control but allowing for complete manual control of the drone without GPS and no "return to home" feature. DJI also changed up the "Play/Pause" button on the top right hand side of the controller by replacing it with just a "Pause" button. This new "Pause" button is used to make the aircraft hover in place and allow for manual control like normal in "P" mode. You would use this feature during the middle of an intelligent flight mode sequence in case of emergency.

Arguably one of the biggest improvements from the other Phantom models is the inclusion of a carrying case that securely closes for quick and easy transport. It can actually hold everything needed for flying including an iPad Mini (but not a regular iPad) and up to three flight batteries if you store one in the drone itself. This case is a great bonus for Phantom 3 or earlier owners as the landing skids are longer and slightly wider on the Phantom 4, which makes it incompatible with cases not specifically meant for the P4; whereas you could have used a Phantom 2 case for a Phantom 3 as they shared the same body style.

DJI's main goal with the Phantom 4 is to make it more inviting and easy to fly. They definitely did a lot of things to make that a reality. I decided to fact check many of the claims with the upgraded features and am happy to report, most of them are true and accurate. Upon starting the Phantom 4 up for the first time, I was pleasantly surprised to hear that they also changed the tune of the startup noise. The old one offended my eardrums each time it started, the new tone is much more peaceful and welcoming. Most experienced pilots know that you should also always calibrate your IMU when doing your initial setup out of the box and check the status after moving locations frequently. It was nice to see that as a part of the diagnostics in the advanced settings, they actually had a readable status for the IMU. Right out of the box, my readout said that one of the IMU's could be calibrated, so I did to ensure maximum performance. It's worth noting that the Phantom 4 actually has two IMUs and two compasses (which should be calibrated each time you change your home point) for stability and control.

Visual navigation is the big new feature DJI introduced with the Phantom 4. As mentioned earlier, this feature is only available in "P" mode and works simultaneously with all the intelligent flight modes. I'm no physicist, but in all likelihood the speed limitation is based upon the Field of View for these vision sensors (60 degree horizontal, 54 degree vertical). Since the sensors are fixed on the frame, if it went too fast, it might only see downward based on the angle of the nose at higher speeds and run into things just above it. The computer also needs enough time to process the landscape and going fast doesn't make that easier. It can see up to 50 feet in front of it at a time and at 22 MPH that's about 32 feet per second, just enough room for adjustments basically. In active track mode I had success with this feature as well. It followed me through the streets of downtown Fort Lauderdale with no problem, avoiding trees and changing course. With the limitations imposed by this fancy new Visual Navigation feature, it takes some of the "fun" out of flying. That's where sport mode comes in. Sport mode is basically the replacement for that flight mode with a 10 MPH speed improvement thanks to the newer, more powerful motors. Allowing you to reach speeds up to 45 MPH, Sport mode allows you to get to places faster. Should you choose to upgrade your controller with the HDMI output module, you could set up your Phantom 4 with a FPV kit and give drone racing a try. Something to look out for in Sport mode while recording video is that the props will absolutely get into the shot at full speed. Even though they increased the motor height, it didn't make a difference when flying that aggressively.

Active Track is one of the most talked about new features on the Phantom 4. I was able to follow a couple of moving boats and I also had it follow me while I was skateboarding. Don't fool yourself into thinking that it works flawlessly though. The best part of Active Track is that it works with the "vision" sensors so you can feel more comfortable letting the drone take control when you are able to lock onto something. When it was following me on the skateboard, it actually evaded a tree, changed direction and proceeded to catch up to me. As mentioned, it's not perfect but it is a new technology with a lot of potential for growth. For example, the drone must be very close to an object to lock in recognition. The feature also loses subjects quite frequently. When I was testing the feature with me skateboarding for example, it had a hard time maintaining the target when I approached other objects like a table or moved too quickly. Once Active Track loses a subject, the drone just stops and hovers. Tap to Fly wasn't all that thrilling but is useful for situations where you want to focus on panning the camera, not flying. It basically just flew forward in the direction you tapped and then avoided obstacles like in any other mode. I suppose this is also useful for just getting smoother shots than manual maneuvering when you just want to fly straight ahead or to the left or right of the frame.

Placing the Phantom 3 side by side with the Phantom 4 helped me to immediately realize how big of a departure the new design is from the previous versions. The Phantom 3 is basically just a regular Phantom pushed to the limit with a modular camera system, while the Phantom 4 is built with more intent. In essence, Phantom 4 is the new standard for DJI, and should be the benchmark against which all entry-level drones are measured.