AppleInsider
Posted: January 27, 2018 11:34PM
in Current Mac Hardware edited May 2018
In the last installment of our four part series, we put the $5,000 iMac 5K to the test against one of the most popular Mac Pro configurations to see how both machines perform from a 3D rendering and thermal perspective. 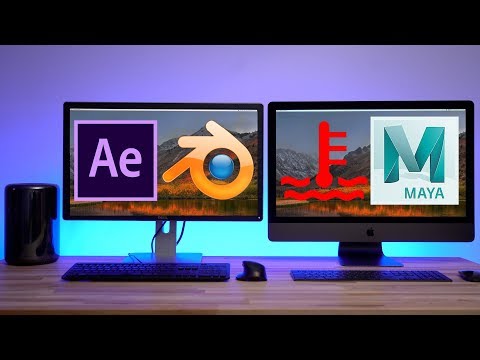 In our first three videos, we talked about specs and upgradability. We also ran a variety of benchmarks and tested performance using photo and video editing applications. Today we're moving to 3D rendering and thermals.

Kicking off today's comparison, we're going to start with Adobe After Effects where we tested performance using a benchmark sequence created by EQUILOUD that is 30 seconds long with a wide range of effects. Rendering to ProRES 422 our Mac Pro finished the task in six minutes and 13 seconds, whereas our iMac Pro was 20 percent faster.

For our last 3D application test, we're taking a look at Maya 2018 and rendering the "Model Village" scene from SolidWorks using the Arnold engine. Our iMac Pro came in almost 40 percent faster, taking 27 seconds to complete versus the Mac Pro's 37 seconds.

Compared to video editing, 3D programs run a lot more linear, so the percentage of speed improvements will apply to much larger timelines or scenes. We didn't see the kind of improvements that we got in our video editing tests, but 20 to 40 percent gains are still quite respectable given both systems are using 8-core processors.

These results are also in line with our first set of tests in our benchmarking video.

Lastly, for our mini series comparing these two high-end professional Macs, we wanted to take a look at thermals. Both machines are basically silent while doing the majority of work, and only ramp up their fans when they're under very heavy load compared to a standard iMac that will get loud a few seconds after you ask it to do a fairly basic task.

To test out how the machines behave under 100 percent CPU load, we ran Cinebench R15 consistently for 10 minutes and recorded the results.

This isn't because the iMac Pro's cooling system isnt capable, but because Apple programed the fan to stay as silent as possible, even under load. At the five minute mark, our iMac Pro was running at 95 degrees Celsius with the fans finally spinning up but nowhere close to max speeds. The Mac Pro was still at only 71 degrees Celsius.

At around seven minutes, both the iMac Pro and Mac Pro settled down to consistent fan speeds and temps, with the Mac running much cooler at 76 degrees Celsius and the iMac Pro at 94 degrees Celsius with CPU speeds slightly throttling -- typically running at full speed 3.9GHz with the occasional short dip to 3.63 GHz.

Since both of these systems are very compact, we decided to push their cooling systems to the limit by working both the CPU and graphics cards to the extreme.

While the graphics cards stayed cool enough, the CPU in both machines did end up throttling after one minute of use, and both systems' fans kicked up to full speed. The Mac Pro did stay cooler and quieter long-term.

To wrap up our four part series, the iMac Pro is a great value when compared to the cylindrical Mac Pro, especially if you consider the gorgeous 5K display and accessories. In terms of raw power, we have up to 50 percent more raw CPU power and 65 percent raw graphics performance -- but like we've seen in this series of tests, it really depends on how the programs make use of that power.

For video editing, we see very good improvements ranging up to 20 times faster if you work with H.265 footage in Final Cut, or if you edit RED 8K footage. For photo editors, the difference is smaller, but still significant if you're working with lots of high resolution images, and the same thing goes for 3D rendering.

For a full overview of the iMac Pro's performance, please check out our comprehensive review.

If you're ready to pick up your own iMac Pro, Apple authorized resellers are knocking up to $500 off the desktops. Details can be found in our 27-inch iMac Pro Price Guide.