How do a pair of HomePods compare to a $180 soundbar?

AppleInsider
Posted: June 29, 2018 4:29PM
in iPod + iTunes + AppleTV edited June 2018
The HomePod offers great audio quality, and as a pair, fantastic stereo music playback. But are two HomePods enough to replace a soundbar in a home theater system that is half the price of a single speaker? AppleInsider finds out. 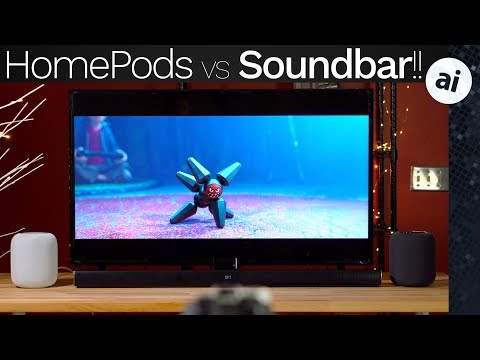 In a recent comparison of stereo HomePods to my own $2,500 home theater system, the HomePods got floored. While this wasn't surprising at all, we didn't expect them to perform as badly as they did.

An investigation into why this happened revealed a bug that causes the Apple TV 4K to output lower audio volumes to stereo HomePods by default. To fix it, we had to manually convert the format to stereo, and saw an instant change that pushed the peak volume of the HomePods from 75 decibels to 83 decibels.

With this change, we decided to compare our $700 Stereo HomePods to my $180 soundbar (2018 version can be found here) to see if they are still too quiet to compete with something that's fully dedicated to TV audio, even at four times the price.

To make this test as fair as possible, the same action scene from the same movie acquired from the iTunes store will be used with each speaker.

We also changed the setting for gain control on our Zoom H6 audio recorder to manual, so it doesn't automatically adjust for the different volumes. This will help us hear the difference in volume between the HomePods and the soundbar.

Interestingly, even after fixing the volume bug, the soundbar is still louder than the stereo HomePods. Also, the tweeters in the soundbar sound brighter and more clear, giving it a more immersive experience overall compared to the HomePods.

The test was then performed again, but with the gain on the audio recorder evened out, to highlight the differences in sound quality

In this case, the stereo HomePods sound much better. Every sound effect is incredibly clear and accurate, whereas the soundbar feels a little tinny on the high end, and definitely not as balanced.

The best thing about Airplay 2 is that you can connect different sources of audio at the same time, so we can use the soundbar and our HomePods together as a complete system. The gain on the audio recorder had to be turned way, way down to keep it from peaking, but I can tell you that it is extremely loud.

If you have a pair of HomePods that you want to use with your Apple TV, they ultimately sound pretty good, but you'll notice a lack of oomph compared to other dedicated audio systems. Don't get me wrong, the quality is amazing, but the volume just isn't there.

Owners of two HomePods who've noticed the same thing could probably get away with using their old soundbar or whatever speakers they have connected to the TV for a good boost of volume.