On that topic, Reeve presented the idea that Siri could be hindered because Apple refuses to collect customer data. Cook refuted the notion.

"The narrative that some companies will try to get you to believe is, 'I've got to take all of your data to make my service better.' Well, don't believe that," Cook said. "Whoever's telling you that -- it's a bunch of bunk."

Competitors in the space, including Amazon and Google, glean data from user devices to inform and develop new features for their respective voice assistants. Apple's Siri, which is subject to the same stringent privacy protections as other Apple products, is widely viewed as behind Alexa and Google Assistant in terms of functionality.

"We challenge ourselves to collect as little as possible," he said. "And when we collect, we challenge ourselves to make it not identifiable. And we don't do things like -- we don't read your email, we don't read your messages. You are not our product. We're not forming the detailed profile and then allowing other companies to buy the opportunity to target you. That's not the business that we're in."

Cook went on to defend Apple's decision to adhere to Chinese government policy, a stance that has forced the company to migrate iCloud account data to China-owned servers. The move, privacy advocates say, opens customers up to potential snooping under the strict regime.

"It's not easy for anybody to get it," he said. "I mean it's it's encrypted like it is everywhere. And so no, I wouldn't I wouldn't get caught up in the, Where's the location of it?' I mean, we have servers located in many different countries in the world. They are not easier to get data from being in one country versus the next." 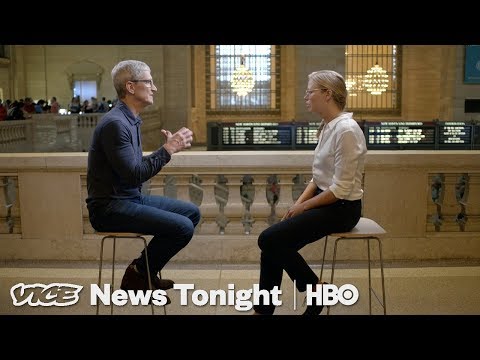 Apple recently removed conspiracy theorist Alex Jones from its podcasting platform, as well as the iOS App Store, for violating company policy. Cook commented on the resolution to strike the controversial content.

"What users want from us and what we've always provided them is a curated platform," he said. "We think the what the user wants is someone that does review these apps, someone that does review the podcasts, someone that on like Apple news, where a human is selecting the top stories. And that's what we do. We don't take a political stand. We're not leaning one way or the other. You can tell that from the stuff on the App Store and in podcasts etc. You'll see everything from very conservative to very liberal. And that's the way I think it should be."

Cook in today's interview said he did not discuss the decision with other companies, nor does he know of any conversations between Apple employees and their counterparts at Facebook or Twitter.