AppleInsider
Posted: October 19, 2018 1:35PM
in Mac Software edited October 2018
On October 19, 2005, Apple released a new tool for professional photographers. It promised much, it ultimately delivered a great deal, and it has fans to this day. AppleInsider talks about the major Apple app that the company killed.

Every single day we are surrounded by unimaginable technology, and we all look forward to what's coming next. Yet when something new comes, we have a peculiar habit of trying to frame it in terms of what has gone before.

So when rumors of Aperture first surfaced, the common reaction was to assume that this was Apple attempting to make their own version of Photoshop. Aperture was for editing photos, it did feature some tools that photographers know from Adobe's software.

Apple's software wasn't Photoshop, it was a new class of app entirely. It was for photographers to handle large numbers of photographs, to do the kind of processing and editing they need daily, and then to send these images on to clients.

When you assume that Apple was trying to mimic Photoshop, you have to conclude that they failed immediately. The features in Aperture were the smallest fraction of what that image editor can do.

Then Adobe released Lightroom, a very similar idea to Aperture, and that seemed to validate the concept. There were key differences between the two but they both aimed to serve pro photographers.

Adobe Lightroom succeeded and is still in use today. Apple's Aperture is no longer in development or on sale.

It's a surprising story because Aperture had much going for it. The Mac is the preferred computer of photographers across the world and Aperture addressed a genuine need. It's too simplistic to blame its failure on a handful of specific issues but as a whole those problems do mean that Aperture is a major Apple app that died.

Apple released Aperture 1.0 on October 19, 2005 and followed it before the end of the year with a bug-fixing 1.0.1. Announcing that original release, Apple said it was: "the first all-in-one post production tool that provides everything photographers need after the shoot."

The company also quoted Heinz Kluetmeier, a sports photographer known for shooting over 100 Sports Illustrated covers at the time.

"What amazed me about Aperture is that you can work directly with RAW files, you can loupe and stack them and it's almost instantaneous," said Kluetmeier. "I suspect that I'm going to stop shooting JPEGs. Aperture just blew me away."

While its features seem familiar today, the way that Aperture grouped photos into stacks or collections based on when they were taken was new. It automated part of the process of working on a shoot.

There was perhaps one more thing that made this a professional's app instead of a consumer's one -- it cost $499.

That 1.0.1 release of Aperture came on December 21, 2005 and then on January 9, 2006, Adobe released a beta of Lightroom for the Mac. It was only for the Mac then, too, so at the time it seemed like Adobe copying Aperture.

In truth, Lightroom had been in the works in various forms since 1999. That was seven years before, so you can imagine that the release of Aperture was a wake-up call to Adobe.

Adobe still didn't rush. The beta period lasted through 2006, most notably adding a Windows version in July of that year.

The difference between Aperture and its rival Lightroom was as much philosophical as technical. The two apps expected different things from their users.

Lightroom expected you to first shoot a lot of images. Then, you sorted and named them, you deleted what you didn't want. Next, you did light editing or passed the image on to Photoshop. You went through this process and you went through it in that sequence.

Aperture expected you to do exactly the same steps, but in any order you liked. You obviously had to shoot photos first but then you could edit these ten now and go back to delete these other twenty later.

Lightroom was comparatively rigid and maybe you liked that, maybe you preferred Aperture's freer approach. Anecdotally, though, with Lightroom you tended to deal with images and be done with them. Whereas with Aperture your image library rather grew and sprawled.

Lightroom was officially released on February 19, 2007. If you were already an Adobe user as so many photographers were, then this was positioned as an addition to Photoshop. It was also priced at $199, half the cost of Aperture.

The pricing gap lasted for about a year. On February 12, 2008 Apple released Aperture 2.0 and dropped the price to that same $199.

Apple turned to a different Sports Illustrated photographer, David Bergman, who said that "even before I begin making adjustments, Aperture's new RAW processing gives me better images with more visible detail and better color rendering than any other program I've tested."

Oddly, though, Aperture 2.0 was arguably not as big of an update as Aperture 2.1 which came just over a month later on March 28, 2008. That release added the ability for developers to produce their own features for the app.

This process might seem familiar to Apple users. Early versions are pretty tightly constrained, with a later version adding developer hooks or other extensions.

With Aperture 2.1, rather than exporting your image to something like Photoshop to do greater editing, you could do more inside Aperture because developers could use plugins.

Apple tried to spin this both ways. It made this sound like a great new feature that would mean you don't have to leave Aperture so often, but also that you hardly ever have to anyway.

Time and National Geographic contributing photographer John Stanmeyer was cited in Apple's press release pointing out the debut of the new version.

"To date, maybe two percent of my photographs needed to be touched up outside Aperture," said Stanmeyer. "Now that I can dodge and burn right within Aperture's new plug-in, I can't imagine when I'll have to open any other application to tone my images."

It was really not until Aperture 3.0 on February 9, 2010, that the software appeared to be catching on. That release boasted more than 200 new features and AppleInsider recognized that some were significant.

This is where Apple introduced Faces, its face detection and recognition tool that we now see in Photos. This was startling: the software would automatically group together all the photos with your Aunt Mabel in them.

It wasn't flawless and it often made some perplexing mistakes but you could tell it that no, this is Uncle Jim instead, and it would learn.

It was still a very impressive new tool even though it felt more like one for consumers. Professionals working on a shoot know who they are shooting, after all. You can see that maybe this would help them searching their archive for past coverage of the same people but it was still a feature that impressed more than it would be used.

There was also now the ability to send your images to Facebook, again making this feel more like a consumer tool.

However, the most significant clue that Apple might be changing its focus to the consumer was the price. Aperture 3.0 sold for $80.

You can perhaps see how Apple was in two minds about the market for Aperture at this time by seeing how it was used in a 2012 Apple Keynote. 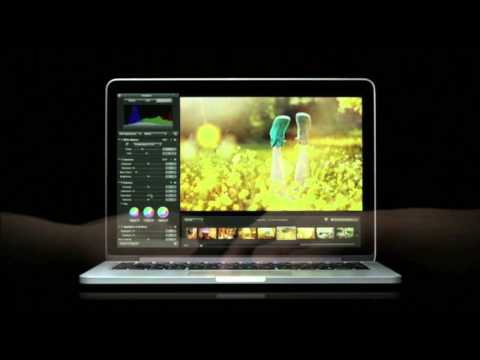 Aperture had its fans but at the time, you felt as if it weren't getting a lot of attention from Apple. In reality, it was being steadily updated: every few months there would be at least a bug-fix release.

Nonetheless, the final major update was on October 22, 2013 with Aperture 3.5. There was one bug fix 3.5.1 in the November and then in October 2014, Apple released Aperture 3.6 but the sole feature of that was compatibility with OS X Yosemite.

Aperture was already dead by then: Apple had officially ceased development and sale of it three months earlier on June 27.

Adobe Lightroom won. It's one thing to be beaten by a rival, but this time Apple rather publicly conceded victory. It announced it was recommending users switch to Lightroom.

Today Aperture is all but forgotten and Apple's consumer Photos app does much of what it did -- but it certainly didn't at the launch of the consumer app. But, more about that, on another day.

There's no question but that Lightroom is more successful. But, it's hard to measure how much it is actually being used. Lightroom is part of Adobe's Creative Cloud suite and so you may have it without even noticing.

Neither app was a tool for everybody, Aperture was and Lightroom is a niche application, but what they set out to do, did create a new class of software for users pro and casual. They both launched a genre of apps that professional photographers would now find difficult to do without.