AppleInsider
Posted: December 13, 2018 4:08PM
in iPad edited December 2018
While Apple's 2018 iPad Pro is a bonafide performance powerhouse in synthetic testing, there has yet to be an app that showcases the tablet's mettle. That recently changed when Epic Games released an update to Fortnite, delivering an option to play the massively popular game at a smooth 60 frames per second.

The new 60fps option can be enabled by navigating to the game's settings. For this test, we set the frame rate to the new 60fps maximum and graphics quality to "High." Interestingly, "Epic" graphics is still not available, though the option is displayed as a grayed-out setting, suggesting it might be enabled in a future update.

We instantly noticed how smoothly the game ran compared to the previous 30fps limit -- no dropped frames and animations were silky. Firefight after firefight, gameplay maintained a high level of performance, with no dropped frames to be found. 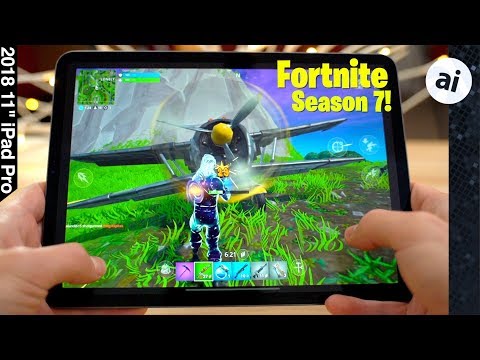 Our Fortnite tests typically involve mobile phones, but the experience is so much better on an iPad, especially the 11-inch iPad Pro. The user interface is spread out nicely and the additional screen real estate provides a much better field of view. Resolution is just as sharp as an iPhone, allowing players to easily spot enemies in the distance.

With enhanced controls and a bigger screen, we were able to play at a more competitive level. This is in contrast to an iPhone, where the experience is relatively restrictive.

We were also completely blown away by the display's color reproduction, which is touted as one of the most accurate on the market. Suffice it to say, Fortnite's vibrant color palette popped.

Animations are silky smooth on the 11-inch iPad Pro.

We played a total of an hour and didn't notice the iPad Pro heat up during testing. Before getting in the game, we were at 91 percent battery life. After testing, battery life was at 73 percent, which is extremely impressive considering Fortnite is both processor- and network-intensive.

Overall, we are extremely impressed with the 2018 iPad Pro, and 60fps in Fortnite Mobile is a game changer. The capability puts the 2018 iPad Pro head and shoulders above the 2017 10.5-inch iPad Pro, since last year's device is limited to only 30fps.

The one saving grace for the 10.5-inch model is full screen play. Epic's most recent patch was supposed to address the black border situation that comes as a result of the new aspect ratio on the 2018 11-inch iPad Pro, but it failed to do so. Once Epic optimizes the game, however, it will be no contest.

Apple authorized resellers are currently discounting iPad Pros just in time for the holidays. Save $50 on select 2018 11-inch models or up to $200 on 10.5-inch tablets. Resellers, such as Adorama and B&H Photo, also will not collect sales tax in many states. For the latest deals and product availability, be sure to check out our iPad Price Guide.