The truth about what's actually good and bad about Apple News+

AppleInsider
Posted: May 2, 2019 1:52PM
in General Discussion edited March 2020
It's been hugely hyped and roundly criticized, but after more than a month's intensive use, Apple News+ has proved to have very specific good and bad features. Before you sign up, or before you cancel, here's a true Pro/Con list for Apple News+. 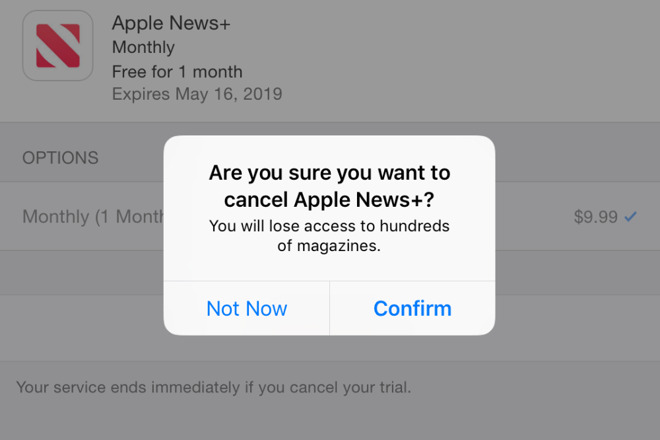 Somewhere between Apple's hype and everyone else's criticisms, lies the truth about the Apple News+ service. Any service's quality and worth is always going to be subjective. Yet still there are definite pluses and minuses which can help you reach the only important issue that matters -- whether Apple News+ is right for you.

AppleInsider has already looked at alternatives and we've even shown you how to create your own news service, but this time we're strictly concerned about the good and the bad of Apple News+ after more than a month of testing. 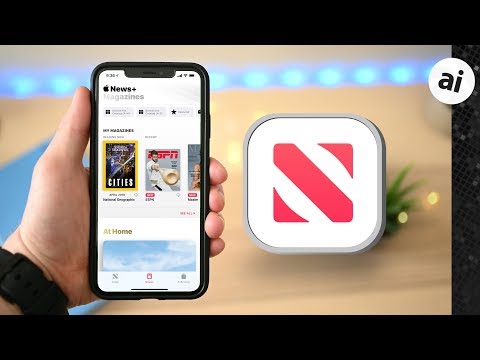 So whether you've only seen Apple boasting about its brilliance, or you've heard criticism that Apple News+ isn't as good as its third-party predecessor, Texture, here are the facts.

Let's get Texture out of the way first. This was an app and a service whereby you could read magazines and newspapers on various devices. Apple bought it, shut down the Windows side, then rebranded it, and worked Texture into its existing Apple News service to create Apple News+.

The general consensus is that Texture was better. It is certainly true that a cross-platform service is better for us all than one solely reserved for Apple devices. 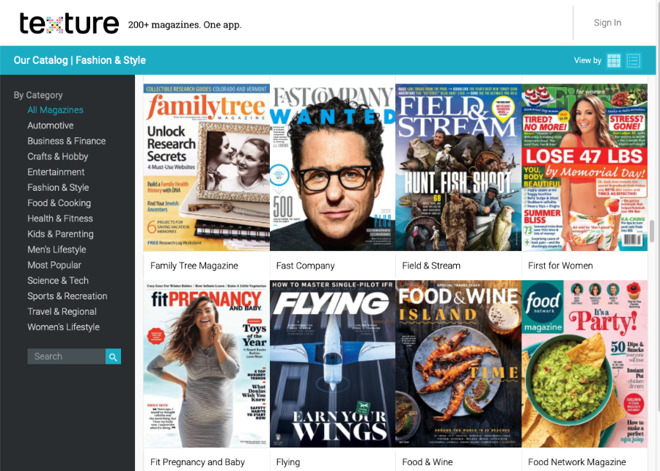 A sample catalog page from the old Texture service

Yet there's also been a claim that Texture's navigation, how you found the magazines you wanted, was better than it is now on Apple News+. We don't buy that because we've found some oddities in how Texture cataloged its magazines. Mind you, Apple News+ has exactly the same problems.

Where it's simply wrong to say that Texture was better, is in the number of magazines you could read. Both Texture and the new Apple service have boasted hundreds of magazines, but in Texture's case it was pretty close to exactly 200.

While the magazines included on both Texture and the new Apple service vary by region -- and Texture had two tiers of subscription offering different sets of titles -- we have tried comparing them. It looks to us as if Texture had around 22 magazine titles that Apple News+ does not, and Apple News+ has about 75 titles that Texture didn't.

Apple has added more titles to do with music, art, technology and sport. Its most significant additions are Scientific American plus BBC titles such as its science and gardening ones. The magazines it has lost since Texture closed include pretty big titles such as Smithsonian and GQ Style.

Yet Apple News+ has GQ. And while it doesn't have Martha Stewart Weddings, it has Martha Stewart Living. You can expect publishers who are trying out one title will bring in their others if the service is successful enough.

Apple News+ will be an Apple Music-like success and not a Ping-like failure only if there is enough in it for enough people to enjoy enough. The range of titles, the way you read them, the whole experience is crucial and Apple News+ has a lot going for it.

Firstly, every magazine has both its own topic page and its issues. The topic page has news stories from the publisher, plus it's headed by not just the current magazine, but an entire year's worth of back issues. 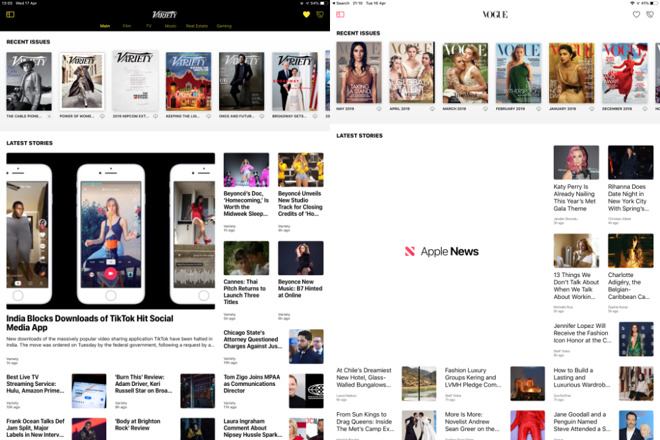 Typical magazine pages. Notice the issues at the top, the latest stories down below -- and, on the left, the hole in Vogue's page because Apple News+ hasn't loaded a story yet.

Being able to always get the latest issue is a big point in favor of Apple News+ because if you're interested in even one title, you're getting it faster than through the mail. If you're regularly interested in more than one, the $9.99 US or $12.99 Canadian subscription cost is a bargain.

And then the back issues are a huge factor. You can get enjoyably lost going back through these twelve months of articles and that's what helps you become steadily more hooked on the service. When you first open it, you can be unsure that there's anything you want to read, but then as you dig further, you are more and more rewarded.

That's partly because there are just some world-class magazines on here and you'll come to see which ones you like. However, it's also because Apple News+ also learns what you like and presents stories to you in that irresistible just-one-more fashion.

What's more, when you find an issue you're interested in, you can very quickly be reading it. Despite their being full of gorgeous double-page spread graphic designs, you don't have to wait for all of that to download before you can start reading. It works in the background, bringing you true magazine quality reading, but without delays.

Then we keep saying that you can do this, but really it's you and up to five members of your family. Unlike Apple Music, the family sharing feature of Apple News+ is part of the regular subscription price. There isn't a second, higher fee for sharing amongst your family.

Plus when you or they are about to be away from internet access, it's possible to download whole issues of any magazine in the collection and keep them on your iPad.

Although, deleting them again is a surprising problem. You can't. The issues are automatically removed 30 days later or purged when iOS needs the space for something. You can't change your mind and say you'd rather clear some space on that iPad manually.

You can work around this by exploiting how Apple News+ will delete them to save space if your storage is getting low, but still this is definitely a bad feature.

If you're having trouble deleting downloaded magazine issues on your iOS device, then at least you found something worth downloading first. With such a mass of material and such a range, it's extremely unlikely that there won't be anything you want to read -- but finding it is hard.

It's also buggy. At times, if you search for a magazine title, you may get just a topic page. That's a collection of news articles and it's typically what you'd see if a publisher doesn't want to put the entire issue onto the service. And yet if you search again, you can end up with that topic page plus the issues at the top.

Instead of searching, you could be methodical and check out the comprehensive Apple News+ catalog of magazines. Except this entire and complete Apple News+ catalog is not entire or complete. For no reason that we can fathom, some titles disappear from the catalog -- and it's not that they disappeared from the service. 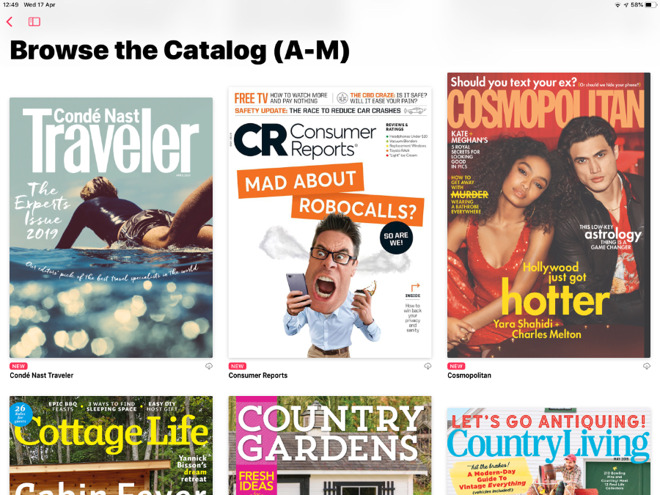 You can browse the complete catalog of magazines on Apple News+, except that it isn't complete. Titles will vanish for no reason.

That's annoying to us as readers, but it's got to be maddening for publishers.

Those publishers are still trying to find the best ways to offer their magazine's content, too. Which means there are two or three different ways of navigating through an issue. You do get used to the different ways, but you are also regularly tapping where you think the Next page button is.

Some publishers have taken to listing a kind of bare contents page with just headlines that you can tap to leap to articles. Others have gone for an aesthetic that shows every page in a thumbnail view. That's definitely much more visually appealing, but finding the article you want is far, far harder. 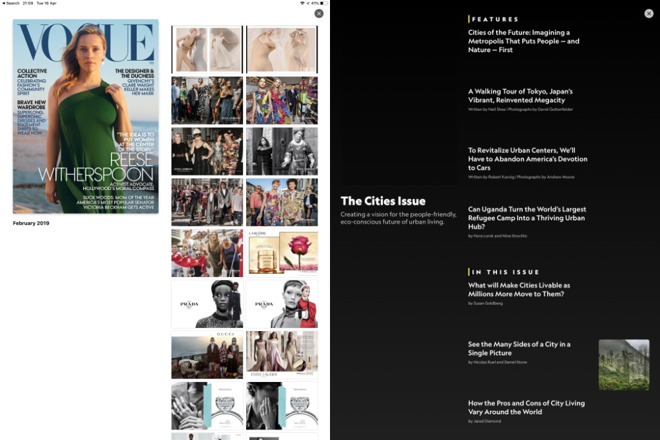 Some of this also contributes to how you're definitely better off reading Apple News+ on an iPad instead of the smaller screen of an iPhone.

You're also better off finishing reading that interesting article now. You can't bookmark an article to come back to. And even though Apple News+ does remember the recent magazines you read, it specifically remembers the magazines. Not the issue.

Over time, you find that you do build up a set of titles that you read a lot and you can have those all listed in the sidebar navigation. You just can't reorder that list and soon it's so long and so disorganized that you ignore it.

All of this is frustrating, but it doesn't stop you getting sucked into enjoying reading the service. What does stop you are the crashes. Right after its initial launch, Apple News+ was prone to crashing and that appeared to be fixed. Yet we've had that reoccur and with no apparent underlying cause like an update to the app or to iOS.

In our experience, crashes are related specifically to Apple News+ itself, not the rest of the Apple News app. Consequently, we could carry on reading the app's Today recommendations and all of the non-subscription titles.

Only, while that meant we could keep on reading, it also underlined how much there is in the regular Apple News app -- and how Apple blurs the lines between the two.

It feels oddly as if Apple News+ is in a nascent, still-forming stage. When we count the irritations, it doesn't feel great at all -- yet when we then remember the hours we've spent engrossed in it, it does.