AppleInsider
Posted: August 16, 2019 2:53AM
in General Discussion
Apple on Friday announced an immediate start to HomePod preorders in Japan, with shipments of the Siri-powered speaker scheduled to land in the hands of customers on Aug. 23. 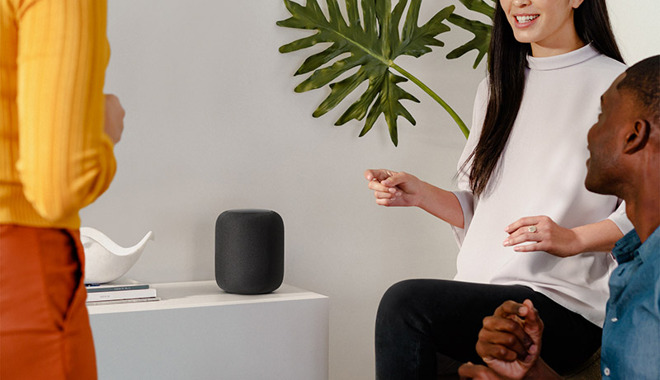 The announcement, shared in a press release posted to Apple's regional website, arrives more than a month after the company published an informational webpage stating HomePod would arrive in Japan this summer.

"We can't wait for customers to experience how great it sounds in their home," Schiller said.

Apple goes on to list HomePod's attributes, from a multi-microphone, multi-tweeter array that assists in location awareness and audio beam-forming to multi-room playback and stereo sound. The latter functions require two or more HomePods, which can be paired to achieve a simulated "stereo" effect or placed in different rooms of a house for synchronized streaming via AirPlay 2.

HomeKit support with Siri voice commands, as well as intelligent Siri Shortcuts, are also named as unique benefits. Apple notes all Siri requests and searches conducted on HomePod are anonymized, while personal requests like phone calls, messaging and calendar queries can only be enabled in the iOS Settings menu.

In Japan, HomePod sells for 32,800 yen (about $310) and is available in white and Space Gray. Alongside brick-and-mortar Apple stores, the speaker will be available at select mobile phone retailers on Aug. 23.

HomePod launched in Australia, the U.S. and UK in February 2018, some seven months after its unveiling at Apple's Worldwide Developers Conference in 2017. Additional markets gained access to the speaker across 2018 with launches in China and Hong Kong in January, Canada, France and Germany in June, and Mexico and Spain in October.

Apple's smart speaker is due to receive significant upgrades with the launch of iOS 13 this fall. Notable enhancements include multi-user voice-recognition, song Handoff with iPhone and enhanced Shortcuts integration.