AppleInsider
Posted: May 7, 2020 5:08PM
in General Discussion edited August 2020
Repair site iFixit has shared x-ray photographs of the new Magic Keyboard for iPad Pro, and they reveal an accessory more complicated than it might appear from the outside. 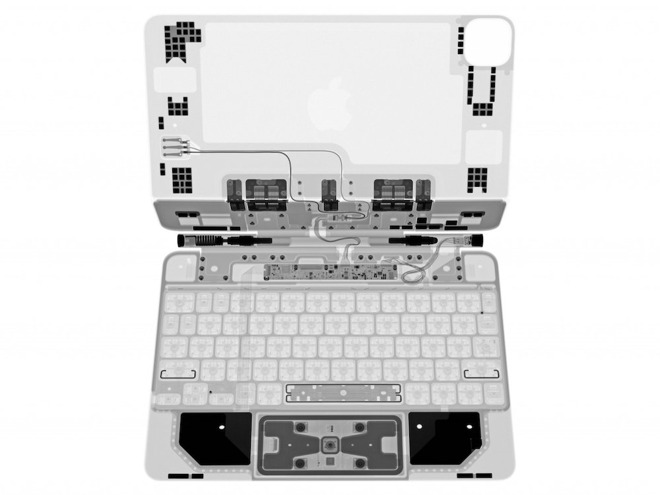 The inside of the Magic Keyboard with trackpad, seen via x-ray. Credit: iFixit

Because of coronavirus lockdowns and social distancing, iFixit hasn't been able to complete its teardown of the new Magic Keyboard for iPad Pro as of yet. Instead, the company has settled for an "x-ray teardown" in partnership with Creative Electron.

The x-ray shots, shared by iFixit on Thursday, show that there's a lot more to the keyboard cover under the hood than one can tell at first glance.

"There is so much going on here, you might never guess that this is technically an accessory to the actual iPad Pro," iFixit wrote, adding that "rarely have we had so much to think about from a single image."

For one, the x-ray images clearly show a switch to a scissor-based keyboard, which iFixit says is the "least complicated" change but "probably the biggest improvement."

The trackpad appears to be a new design, and one that's different from MacBook variants. This trackpad actually features what appear to be physical buttons. Next to the trackpad are two large metal plates that may be reinforcements.

Moving up the Magic Keyboard, iFixit's images show at least two spring-loaded hinge designs, which are part of the sophisticated "floating" mechanism that sets the accessory apart from other products.

Other interesting tidbits include separated cable routes, which could ease hinge tension on the cables, and a mass of tiny magnets near the camera cutout.

The new Magic Keyboard with Trackpad accessory starts at $299 for the 11-inch model and $349 for the 12.9-inch model. They're compatible with both the 2020 iPad Pro and the previous 2018 generation.