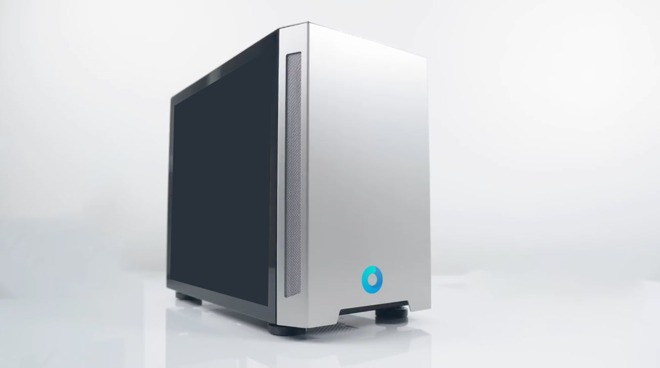 The "Velociraptor" is the first of OpenCore Computer's range of desktop computers that operate as a Hackintosh. Boasting high levels of performance, the company is pitching the system at people who want the potential speed of a Hackintosh, but without needing to build or set it up for themselves.

The initial Velociraptor includes AMD Ryzen 8-core, 12-core, or 16-core processors with up to 64 gigabytes of memory, and up to an AMD Radeon VII GPU with 16GB of HBM2 memory, as first reported by MacRumors. Inside the Mini-ITX case are a pair of SSDs, each holding macOS and Windows installations and being up to 2 terabytes in capacity, as well as a third hard drive up to 4 terabytes in size.

In Geekbench 5 tests, OpenCore Computer claims the Velociraptor outpaces all MacBooks and Macs except the Mac Pro in multi-core testing, but even beats the Mac Pro in single-core tests.

The macOS installation is "professionally installed using the OpenCore bootloader," with all features including Hand Off and Continuity working like a regular Mac. However, the company does warn that, though it dues run most Adobe Creative Cloud apps right out of the box, the exception is Lightroom CC, but Lightroom Classic works fine.

The Velociraptor is being sold for $2,199 at its base price. The T-Rex, with support for up to 64-core CPUs and 256GB of memory, and the higher-performance Megalodon are said to be launching within months with prices yet to be announced.

It is questionable as to whether Apple will allow OpenCore Computer to offer its current product, as selling computers running macOS that aren't an official Mac or MacBook violates Apple's end-user license agreement. This makes it extremely probable that lawyers working for Apple will step in to try and halt sales.

Apple already has some precedent on its side, securing a permanent injunction against clone Mac producer Psystar in 2019 following a 17-month lawsuit. As well as preventing Psystar from selling or distributing derivative works of Mac OS X, and circumventing Apple's measures to prevent the operating system from being copied, the firm also had to pay out $2.7 million in damages and attorneys fees.

Given the circumstances of the new product's sale, it appears that OpenCore Computer could face a similar fate in the near future, though it seemingly acknowledges this is a probability. On attempting a purchase, the site store advises the "convoluted macOS EULA agreement" limits its payment options to Bitcoin.

Furthermore, the OpenCore Computer name is also causing its own issues. In a statement to MacRumors, OpenCore Bootloader group Acidanthera denounced the use of the OpenCore name by the company, as well as distancing themselves from its activity.

"It is shocking and disgusting that some dishonest people we do not even know dare to use the name and logo of our bootloader, OpenCore, as a matter of promotion in some illicit criminal scam," the statement reads. "Be warned, that we a nohow affiliated with these people and strongly ask everyone by all means to never approach them. Be safe."

While the legal nature of creating a Hackintosh is generally murky, there are a variety of projects online that can assist or guide intrepid computer users down the route of making their own version. Making a Hackintosh isn't an easy task, with hobbyist tinkerers most likely to do so, and there is also the prospect of Apple potentially rending an installation useless following an update.

Given the potential for data loss, software incompatibility, and stability issues, let alone the total lack of support from Apple, it is not advisable for a business or other major entities to go down the Hackintosh route.

That being said, Apple generally leaves creators of Hackintosh projects alone. In cases such as Psystar, where it can potentially harm Mac sales in a significant way, Apple's lawyers will step in, but home tinkerers are unlikely to face such scrutiny.
«12»