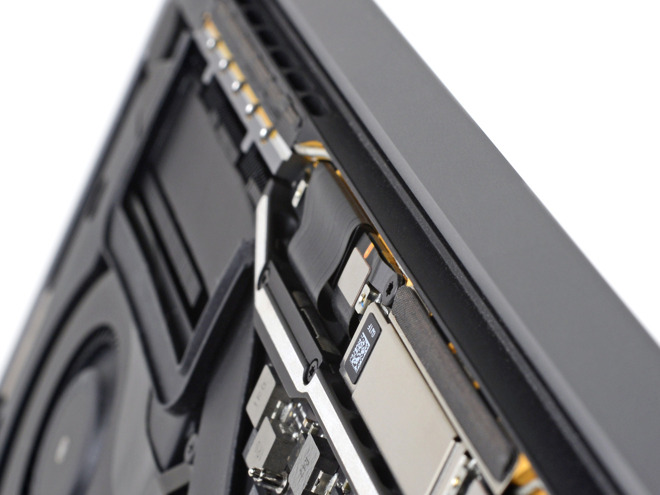 Filed with the U.S. District Court for the Northern District of California, the action targets the so-called "stage light" or "flexgate" issue that presented in MacBook Pro models manufactured in 2016 and 2017.

Discovered in 2018, the problem manifests as dark patches that run across the bottom of an impacted MacBook Pro's display, resembling light installations commonly seen on a theater stage. Some users reported that opening their MacBook Pro's display past a certain angle renders the screen nonfunctional.

Independent repair outfit iFixit investigated the "stage light" effect in early 2019 and tracked the issue back to a thin flex cable that connects the display to a controller situated on the logic board beneath MacBook Pro's Touch Bar. According to the lawsuit, these flex cables were defective and would deteriorate over time as the connected display was opened and closed.

While Apple ultimately launched a repair program covering 2016 13-inch MacBook Pro models, the company failed to include 15-inch Pros and models produced after 2016 that faced identical issues. Further, the tech giant delayed issuing the repair program "despite the fact that it both knew and should have known" the root cause of the problem.

Prior to the repair program, owners were forced to pay out of pocket for costly repairs. As the flex cable was an integral display component, remedying "stage light" often necessitated replacement of the entire screen assembly.

Apple has not revealed when it first recognized complications with the 2016 and 2017 MacBook Pro, but variants unveiled in 2018 included a longer display flex cable in an apparent bid to fix the issue.

"Apple was aware of the issues with the backlight screen and the defective flex cable, in light of the comments posted by consumers on Apple's discussion forum and that those comments were deleted after they were posted," the lawsuit reads.

The class-action argues violation of unfair competition laws in various states, the Song-Beverly Consumer Warranty Act, the Magnuson-Moss Warranty Act, and consumer fraud statutes in all 50 states and the District of Columbia. Breach of express warranty, breach of implied warranty, fraudulent concealment and unjust enrichment are also asserted.

Plaintiffs seek damages, court fees and a judgment requiring Apple to identify and declare all defective MacBook Pro laptops, among other relief measures.