AppleInsider
Posted: February 25, 2021 12:38AM
in General Discussion edited February 2021
Accessories maker Belkin is working on a wireless audio adapter that supports Apple's AirPlay 2 protocol, potentially offering a worthy successor to the defunct AirPort Express, according to a new leak. 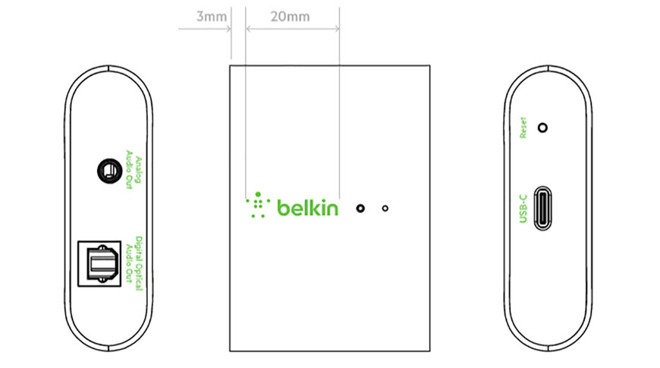 According to the document, Belkin's adapter will be marketed as "SoundForm Connect" and includes support for AirPlay 2. The unit will pipe incoming wireless audio to speakers and other devices via a 3.5mm jack or optical digital audio cable. A USB-C port likely powers the device, though it could also be used convert digital audio signals to analog.

"SoundForm Connect" could be worth a look for users lamenting the demise of Apple's AirPort Express base station, which offered AirPlay 2 streaming through an analog/digital output jack.

Introduced in 2018, AirPlay 2 enables iPhone, iPad, Mac and other devices to stream audio to multiple speakers in different rooms. The improvement over first-generation AirPlay also cuts down on audio lag, integrates Siri controls, enhances HomePod functionality and allows users to also sync output throughout a home.

HomeKit integration is a major AirPlay 2 feature that enables device access and control -- including scenes -- from the Home app.

The FCC listing does not mention a release date. Pricing could be around $120, according to retail listings uncovered by Roettgers.