AppleInsider
Posted: April 8, 2021 10:37AM
in iPad edited May 2021
A purported image of forthcoming iPad mini dummy cases shows the same design as the iPad mini 5, while ones for the 12.9-inch iPad Pro appear to feature a reduced camera bump. 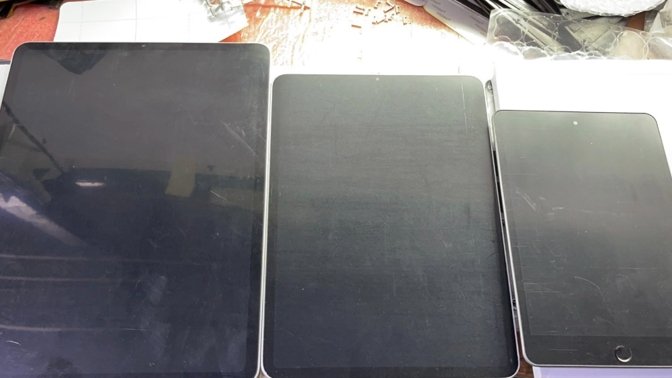 As expectations mount that a new iPad Pro may be revealed soon, a long-time leaker has shown off images of dummy chassis designs. Alongside dummies for both the 11-inch and 12.9-inch iPad Pro, the images feature what's believed to be the "iPad mini 6."

Leaker Sonny Dickson says that these are dummy units, so there is no display to turn on yet. That makes determining the width of bezels uncertain -- but it appears that both the iPad Pro and iPad mini refreshes feature no marked redesigns.

One potential exception to this is that the two iPad Pro dummies show all the correct ports, except for the Smart Connector. The regular Smart Connector is not visible in the images in its usual place, nor is it reportedly relocated to anywhere else on the chassis. The Magic Keyboard requires this connector, so it seems unlikely to have been stricken from the design.

Other features, such as a Thunderbolt USB-C port versus a USB 3.1 type C port and a faster processor expected for the model are obviously not able to be shown on a dummy likely intended for the case manufacture industry.

Separately, the 12.9-inch iPad Pro dummy does appear to feature a less pronounced rear camera bump, as compared to 11-inch dummy, or the currently shipping models.