Apple Car may use exterior screens to signal other drivers

AppleInsider
Posted: August 31, 2021 11:50AM
in Future Apple Hardware
An Apple Car could provide detailed warnings of its actions to other drivers by using LED screens all over the vehicle to tell other drivers what the self-driving system is doing. 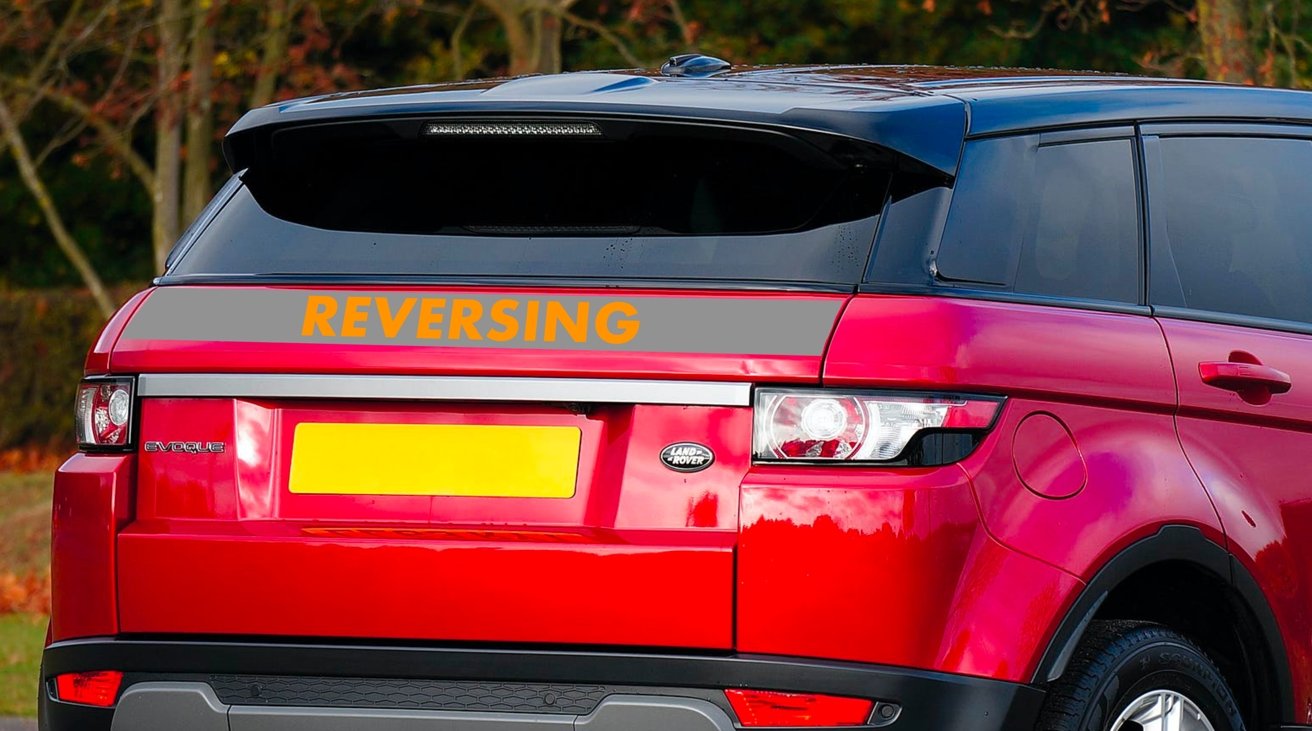 Apple's long-rumored vehicle is anticipated to include some form of self-driving technology, given that Apple has been testing it for years on public roads. While Apple's testing seems to be centered on reading the road and responding to conditions, there are other features of driving that inbound systems have to deal with.

One of the problems is indicating to other drivers what the vehicle will do next. Unlike seeing the silhouette of the driver ahead to get a small clue for where they are about to go, or other smaller driving actions, there may not be the same opportunity for contextual clues if a driver has to encounter a driver-less vehicle.

In a patent granted by the U.S. Patent and Trademark Office on Tuesday titled "Exterior Lighting and Warning System," Apple proposes that it could be more explicit in what a self-driving system can tell other road users. Instead of the usual array of simple indicator lights, Apple instead believes it can do the same job using more complex lighting systems.

In short, Apple's system involves the creation of displays that are placed on and around the vehicle, potentially as an all-encompassing strip of lights. This long display could show a variety of information to other road users, not just that brakes are applied or that they wish to travel left or right. 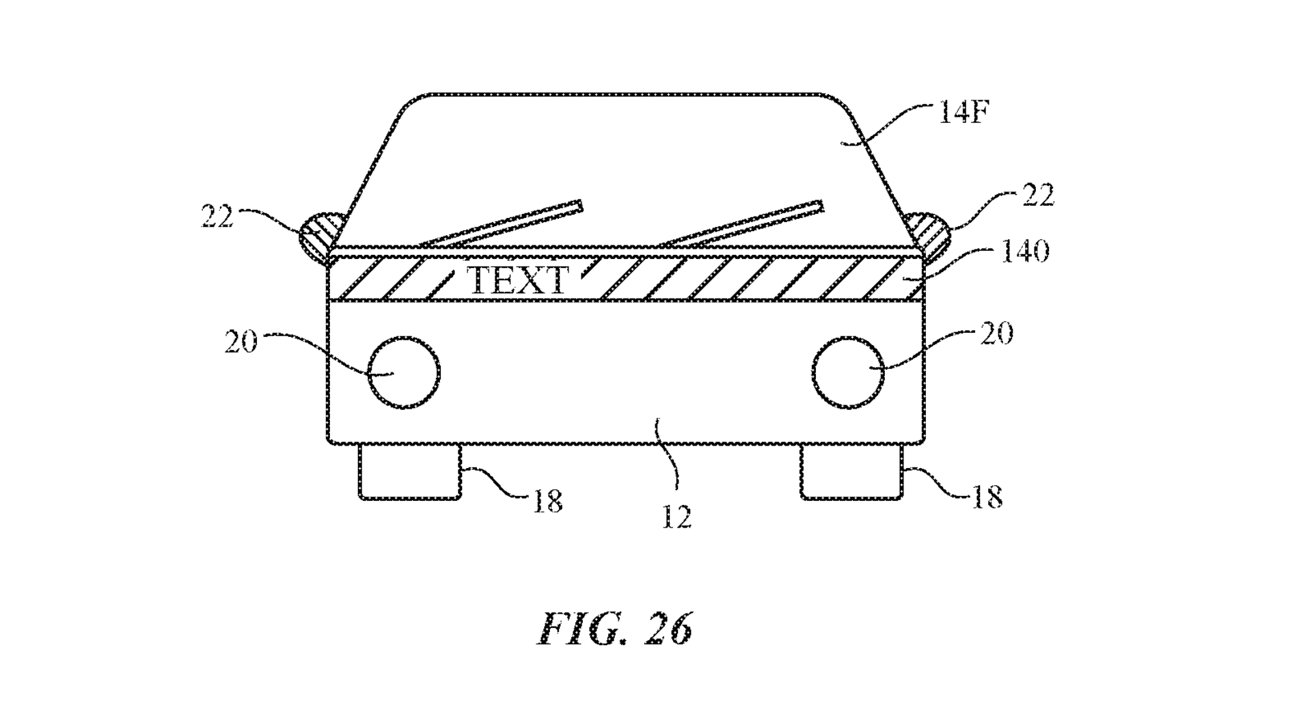 An example of an informative light strip that encircles a self-driving vehicle.

This can include more detailed braking information, the relative speed of the car to another following behind, countdown timers for actions, and other messages. They can be text, but also could consist of graphics and video.

For drivers parking the vehicle, the displays could show a goodbye message, or welcome the user on arrival to the vehicle itself.

The latest patent is a follow-on from a previous patent of the same name, granted on October 30, 2018 with the same inventors. While that initial patent covered the idea of exterior-facing indicator signs, the new patent largely deals with technologies used to create the signs. 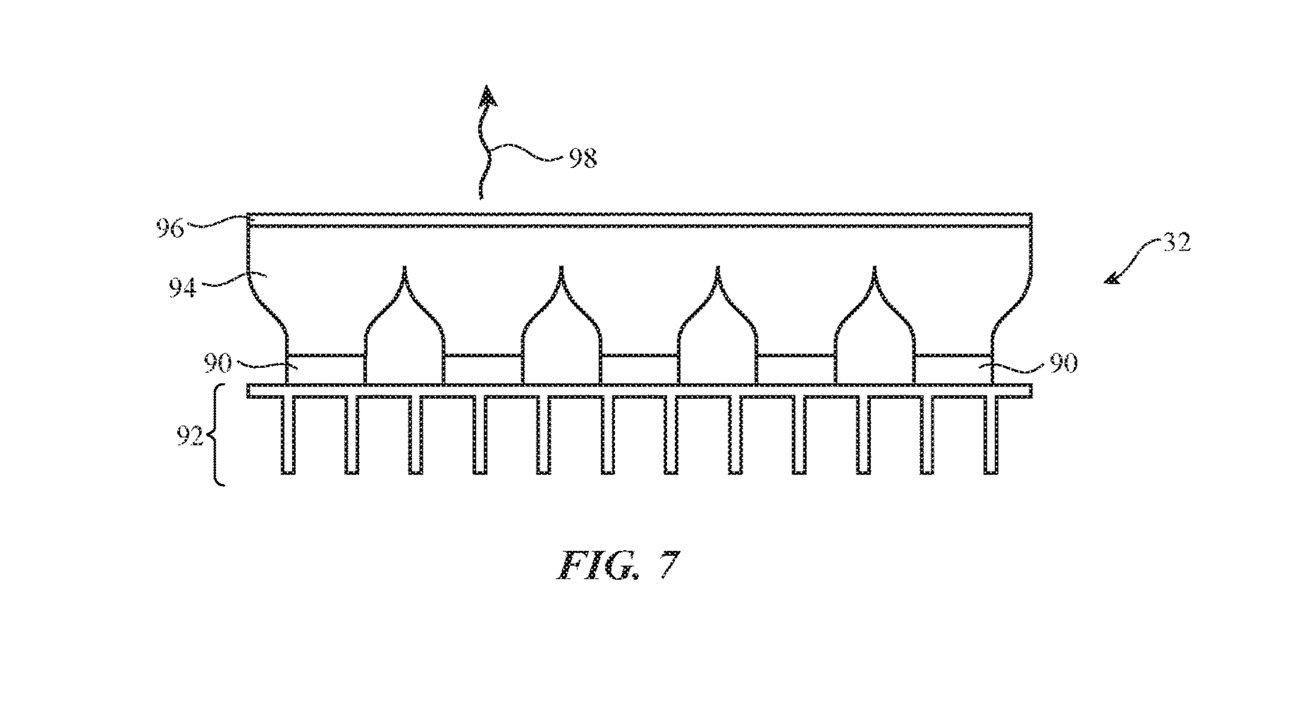 For example, one version involves the displays consisting of LEDs placed on a transparent substrate. When mounted on the body or the rear window, it will allow the display to be seen through, and to become visible only when the LEDs are lit.

Alternative ways of doing the same thing include light sources emitting light into a light guide, or the use of a mirror to reflect light out of the vehicle itself.

Apple files numerous patent applications on a weekly basis, but while the existence of a patent indicates areas of interest for Apple's research and development efforts, they don't guarantee the idea will appear in a future product or service.

This is far from the only light-centric patent Apple has relating to the Apple Car, and is among a large number pertaining to car designs.

For the outside of the vehicle, Apple's February 2020 patent for "System and method for light and image projection" offers a headlight that highlights part of the road that a driver should pay attention to, such as road signs or obstacles.

Inside the car, a privacy-based variable lighting system could combine narrow light band use with window filters that block specific light bands, allowing occupants to see each other, but prevents those outside the vehicle from seeing the illumination.

Apple has also mused about adding lighting systems in seats, to tell passengers how to use seat controls, and to instruct them to buckle up.